Lars Von Trier's provocative two-part four-hour drama of sex, lust, addiction, degradation, violence and psychological association, Nymphomaniac, hit Australian screens yesterday. Parts I and II (cut, censored versions of a larger, more outrageously indulgent 5 1/2 hour cut that have a staggered release at prominent International Film Festivals over the course of 2014) tells the story of Joe (Charlotte Gainsbourg), a now middle-aged self-diagnosed nymphomaniac. On a cold winter’s evening a forgiving asexual bachelor and literature and philosophy enthusiast, Seligman (Stellan Skarsgård), finds Joe beaten up in an alley. He brings her home to his modestly furnished flat where he cares for her wounds and allows her to rest, before inquiring about her life. As it turns out, she's a very willing storyteller, recounting (in somewhat excruciating detail over the eight chapters, which span both Parts I and II) her blossoming sexuality as a youngster and her various jobs and relationships, all the way through to the events of the evening she was found. Seligman listens intently to the multifaceted story of her life, interjecting to comment and offer his opinion and try to attempt to relate to her affliction and struggles. 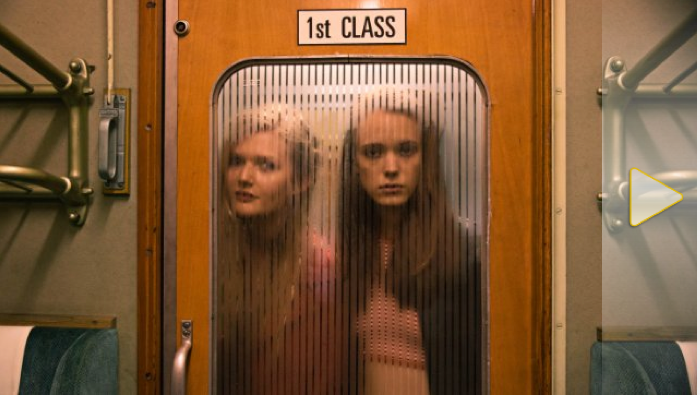 While I found this idea a fascinating one, I felt immediately that the approach was misguided. The flashback/forward structure soon grew wearying, as we listen to Gainsbourg and Skarsgard discuss the sequences we have just witnessed, but in a playful tone which altogether dismisses some of the behaviour (forgiving it, for the most part) and then re-evaluates it through far-fetched juxtapositions and deriving meaning where it isn't due. I get that Von Trier is having us on with all of this, but the gleeful, excitable way Seligman latches on to one aspect of Joe's debaucherous lifestyle and digresses into a barely-relatable anecdote is a really smug, annoying layer that I found less than amusing.

Part I was surprisingly conventional - this then this as relayed by Gainsbourg - while Part II was less so, but unimaginably bleak and ugly. There are few surprises, save for those that defy belief. These recounts are worthy of factual scrutiny, as I found it is near impossible to accept some of the coincidences she recounts. But what of Joe as the narrator? How reliable is she? As Seligman once stops her and says: No, no no, there are too many coincidences in your story", I was sitting there thinking the same thing, but had been for some time. What lead to Joe being beaten up and left in the alley? The eventual reasons are remarkably unlikely and I feel like that final chapter, 'The Gun', is the worst filmmaking of LVT's career.

I found the sequence involving Uma Thurman - lauded by many as one of the highlights - to be unrealistic and unconvincing. I could not accept that a) her husband would be so willing give up his wife and children for a woman about half his age that clearly wasn't interested in a serious commitment, and b) that such a distressed woman would subject her young children to the "whoring bed" as she calls it. The whole scene, save for a few lines I think were unintentionally funny, was as uncomfortable as anything in the film. Uncomfortable because I didn't see a ring of truth in it at all.

I cannot image what occupies the screen for the hour and a half present in the extended cut, but I can't recall seeing a more indulgent project. While I admit to rarely feeling bored, this punishing film failed at sustaining intrigue. Behind the lens is Lars' smug sense of status, the belief he now seems to possess that anything he puts on screen will be embraced and applauded. I lost count of the redundant scenes peppered throughout, that serve little purpose but to serve this haughty agendas. Take the sequence where Joe propositions a burly African man for sex. He brings along his brother (or cousin, I can't recall) and they argue at length in a foreign language (with penises erect) over which position they would take with her. Joe looks from one to the other in confusion. This was just one sequence to convey just how wild Joe's sexual appetite gets, but in the scheme of things, it shouldn't have made it through the editing room. It is interesting to note that LVT filmed the most explicit sequences using porn stars and then digitally superimposed the faces of the actors over them.

Von Trier's musical choices work inconsistently here. Some, like the thrash-meta interludes are a jolting shock to the system. Others, like 'Born to Be Wild' (which accompanies Joe and her friend as they prey on the male passengers of a train, seemingly unable to control themselves when tempted by the teenage provocateurs) are obnoxious and lazy.


As for the casting, I was especially impressed with Stacy Martin (young Joe), who was far more compelling than most of her veteran counterparts, and Jamie Bell, who constructs one of the most convincing portrayals of the extreme personalities depicted. I have begun to question Charlotte Gainsbourg's sanity, agreeing to appear in another LVT film and subjecting herself to more physical abuse. This was uninspired casting, and for the most part is a tiring performance. Still, there are occasions when her grapple with the shame of her decisions is affecting. There are some pretty ordinary blink-and-you-miss-it cameos like Udo Kier, Willem Dafoe and Connie Nielsen, and Christian Slater was horrifically miscast as Joe's never-aging environmentalist-enthusiast father. The only character who possesses some pathos is Seligman, but LVT can't even leave him with an ounce of dignity.