The period of German Cinema between 1918 and 1933 is referred to as "Expressionist Cinema" and can be described as an early pinnacle of film experimentation of technology and effects that utilised revolutionary filmic elements to abstract the mise-en-scene, methods of acting and gesture, lighting, editing and shooting methods. These abstraction are intertwined with ambiguous and unusual narratives that dismissed a sense of clarity and left the viewers grasp on characters and their motivations not entirely clear. The aims of many directors during this period was to create a form of "Art Cinema" where the "films appeared to be paintings brought to life".

Thomas Elsaesser argued that German silent cinema, however influential it has been on certain aspects of Hollywood filmmaking, remained non-imposed on the commercial cinema, and thus remained a form of 'alternative cinema' during this period. Lote Eisner argued that the transformation was an act of repression and that history, through the Gothic narrative, had returned in the form of the distinctive uncanny or the fantastic. Films of this period were also lacking a linear narrative or a plausible timeline and appeared to have no distinct beginning or conclusion. Robert Weine's The Cabinet of Dr. Caligari (1920), one of the earliest and most influential examples of the bizarre, fantastical cinema that flourished during the Expressionist Movement, introduced images, themes, characters and expressions that would be fundamental within the horror genre for many years to come. 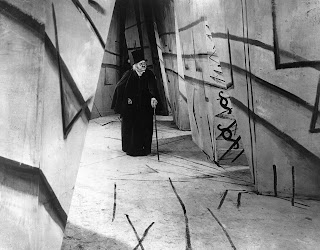 Robert Weine's Caligari makes a return to the style of Georges Melies (A Trip to the Moon, 1902)  by building a heavily stylised atmosphere and utilising otherworldly theatrical effects to distort perspectives and exaggerate and caricature reality. This is very evident in the oddly constructed theatre-like sets, which feature unrealistic backdrops and jagged cut outs. Lights and shadows are painted directly onto the set walls, floors and background canvases, and the film features hysterical over-the-top performances. The characters also reside in furniture-less houses and are often perched on ridiculously high stools. The use of chiaroscuro is also very prominent, often shrouding the characters in heavy shadow and masking their actions.

In Caligari, Weine introduces the main narrative by using a frame story. Most of the plot is told via flashback by its young narrator, Francis (Fredrich Feher), to an old man in his company. Living in the fictional German mountain village of Hostenwall, Francis and his 'close' friend Alan visit a carnival in the village where they are lured into seeing the deranged Dr. Caligari (Werner Krauss) and his sleepwalking Somnambulist, Cesare (Conrad Veidt), whom the doctor is displaying as an attraction. Awakening the creature from a '25 year long sleep', Caligari challenges his audience to have Cesare answer any question. When Alan asks Cesare how long he has to live, Cesare informs him that he will meet his death at dawn, a prophecy that is chillingly fulfilled. 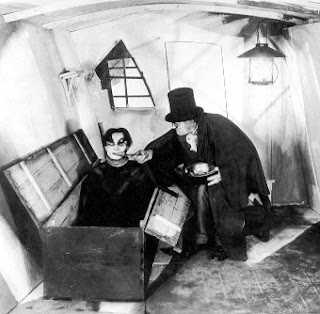 A distraught Francis begins to investigate Caligari and Cesare, directing the police to Caligari's quarters. Caligari orders Cesare to kill Francis' friend Jane, which results in his refusal after he is captivated by her beauty. He carries her out of her house, leading the townsfolk on a lengthy chase to the outskirts of town. Cesare dies of exhaustion after discarding Jane at the end of the pursuit, and it is discovered that Caligari had created a dummy of Cesare to distract Francis. After following a fleeing Caligari to a local insane asylum, Francis discovers that he is actually the director.

With the help of some of orderlies, Francis uncovers the man's obsession with a monk called Caligari, who, in 1093, visited towns in northern Italy and used a somnambulist to murder people in similar fashion. Having waited for a person with such an affliction for some time, he decides to put his theory to the test. Francis and his colleagues confront Caligari on suspicion of murder and imprison him in his own asylum. As revealed in the final minutes, however, the truths of this tale are not so apparent, and Caligari delivers one of cinemas earliest "twist endings". 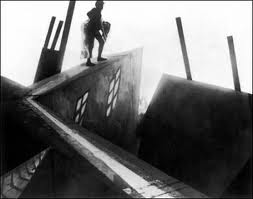 While the film's visual quality is certainly no easy watch today, it's influence is unmistakable. The Cabinet of Dr. Caligari was the first Expressionist example of the horror genre, and the film's ideas and themes stretch all the way to the very recent features, The Imaginarium of Doctor Parnassus (2009) and more evidently, Shutter Island (2010). The world set in the frame story is the very same as the one in the flashback, making Francis' bracketed story unreliable, a feature viewers of Shutter Island will recognise. The impressive work of set designers Hermann Warm, Walter Roehrig and Walter Reimann ensure that the film is endowed with a sideshow ambience and there is a sense of the uncanny associated with every scene. At a brief 71 minutes, its a notable classic from one of the great movements in cinematic history.
Posted by Andy Buckle at 9:53 PM