Spirited Away is a wonderful animated film, perfect for the whole family. It is richly endowed with beautiful visuals, inspired imagination, relevant themes, mystery and heart. From Studio Ghibli and director Hayao Miyazaki (Princess Mononoke, Howl's Moving Castle), one of the most celebrated filmmakers in animation history, comes the winner of the Oscar for Best Animated Feature at the 75th Academy Awards. It also tied with Bloody Sunday for the Golden Bear at the 2002 Berlin International Film Festival. Pixar director John Lasseter (Toy Story and Toy Story 2), an admirer of Miyazaki, was approached by Walt Disney Pictures to supervise an English-language translation for the film's North American release (which wasn't until September 2002, following its release in Japan in 2001). Spirited Away became the most successful film in Japanese history, grossing over $274 Million worldwide, and the subject of critical acclaim. It is one of the most magical family feature films I have ever seen, and one I would most certainly have enjoyed immensely if I had seen it in cinemas in 2002. Spirited Away follows the story of Chihiro, a spoilt and sullen 10-year-old girl who is moving to a new neighbourhood with her parents. After attempting a shortcut, they find themselves lost and discover what appears to be an abandoned amusement park. Chihiro's mother and father decide to explore the park, with the frightened Chihiro reluctantly following. Leaving her parents, who suddenly decide to start devouring the food from one of the stalls, Chihiro spots a functioning bathhouse on the other side of a bridge. When she approaches, a young boy insists that she must leave before nightfall. She hastily returns to the stall to find that her parents are not only still eating, but have been transformed into pigs. Chihiro discovers that the park has developed otherworldly characteristics, has become surrounded by water and mysterious creatures and spirits have begun to appear.

The boy, whom she runs into again, reveals that his name is Haku. Smuggling Chihiro into the bathhouse, he instructs her to find a job, so that she can safely remain within the realm and have the time to recover her parents and escape. As she becomes acquainted to the world, she is given a job by Yubaba, the elderly witch who holds a tyrannical rule over the bathhouse. As she plans to rescue her parents, Chihiro faces increasingly perilous obstacles, but is aided by a spirit known as 'No Face'. In a very evident transition from childhood to maturity, Chihiro discovers the courage she never knew she had, enabling her to not only survive in the realm, but successfully managing to free her family. 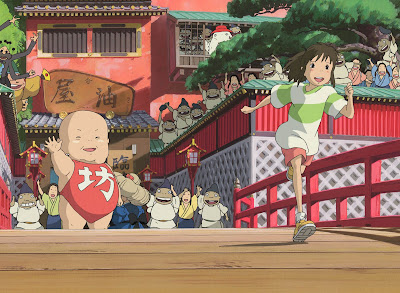 As a spoilt child forced into a fantastic world, Chihiro becomes completely separated from everything she has known, and must find her way back to reality. In her attempt to regain herself (the spell on her name means she can barely remember it, instead adopting 'Sen' as her name), Chihiro must forge a new identity and come of age. The fantasy realm is beautifully built and a wonderful expression of Miyazaki's rich imagination. Full of ghosts and spirits, mysterious creatures and personified animals, there sure is plenty to marvel at. You get the sense that it is loosely based on Louis Carrol's Through the Looking Glass, though purely as a respectfully tweaked inspiration. The animation is amongst the most impressive of Miyazaki's career, and the extreme detail assigned to the realm, and especially the bathhouse, is absolutely incredible.

There is a good pace to the plot, with engaging action commencing almost immediately. The balance between the films critical societal commentary, its magic and its downright bizarre elements, is perfect. The accompanying score is also superb. Chihiro's initial realisation that she was entrapped in this fantasy realm is punctuated by this energetic, somewhat haunting, melody. While the stunning visuals and intriguing protagonist have you drawn to the film almost immediately, this sequence ensures you are hooked. I had always heard such great things about this film. I thought it was magnificent; and easily one of the best animated films of the decade not made in the studios of Pixar.