The Help is the film adaptation of Kathryn Stockett’s beloved 2009 debut novel about a young woman, Eugenia “Skeeter” Phelan (played by Emma Stone) and her relationship with two black maids during the Civil Rights Era of America in the 1960’s. The novel is told from the point-of-view of the three narrators, with Aibileen Clark (Viola Davis) adopting the dominant voice in the film. Skeeter, a graduate from the University of Mississippi and an aspiring journalist and novelist, returns to Jackson, Mississippi, to discover that her beloved childhood maid no longer works for her parents. Unlike her snobby, middle class friends, who have all married and had children, Skeeter, to the dismay of her mother, Charlotte (Alison Janney), has remained single and is more interested in pursuing a career as a writer. 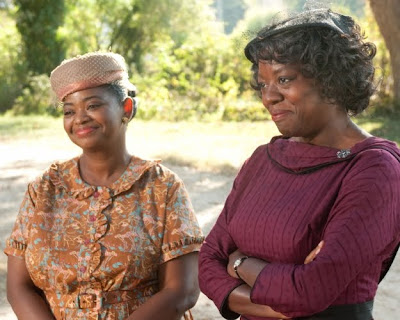 Inappropriately, Skeeter asks Aibileen for assistance with her ‘homemaker hints’ column for the local paper, and becomes uncomfortable with the attitude her friends have towards their ‘help’, and especially Hilly Holbrook (Bryce Dallas Howard) and her ‘Home Sanitation Initiative’, a proposed bill to provide separate bathrooms for the Negro maids. Amidst this era when discrimination because of colour was horrifically prevalent, Skeeter, because of her own experiences as a child and her admiration for the women, is one of the few in Jackson to genuinely care about their ill-treatment and the fact that they have spent their entire lives taking care of white children, and losing time with their own, for far less than the minimum wage. It really is atrocious to see such behaviour from these women, raised by maids they idolised themselves, who are now looking down on these same women just as their prejudiced mothers did before them.

Skeeter decides to write a controversial novel from the point-of-view of the maids, exposing the racism and treatment they faced during their work with white families. After convincing Aibileen to provide some of her accounts, the outspoken former maid of Hilly, Minny Jackson (Octavia Spencer), who has recently taken a job with an ostracized misfit, Celia Foote (Jessica Chastain), agrees to provide some of her own. When more women step forward, Skeeter collaborates their accounts and the scandalous novel, The Help, is accepted for publication under 'Anonymous' and is a huge success.
Since the film’s release in the United States there has been some talk of Oscar consideration. Dealing with subject matter that the Academy usually loves (for example The Blind Side - though this is far superior), achieving box office success ($120 million, against a budget of only $25 million) and Viola Davis’ outstanding, awards-worthy performance, are all factors that could be taken into account. While there are superior films that will struggle to gain Oscar support, and likely better films scheduled for release later in the year, this touching, inspiring and heartfelt drama is certainly not one to write off. 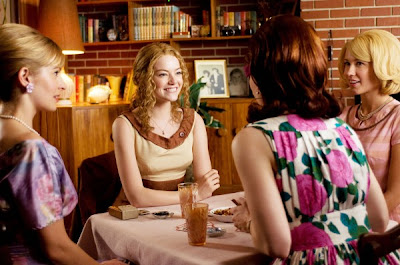 But, The Help is by no means a perfect film. While my knowledge of racism and discrimination during this period is pretty thin, I am aware that it was very prevalent, though likely flattened for the purpose of the story. The heroes and villains, and the simplistic racial stereotyping, are presented in the extreme for the benefits of creating melodrama and it is overlong, dragging in the final third and committed to neatly tying up all the loose ends. There are several corny flashbacks to Skeeter as a child, with one particularly sentimental scene with her nanny, Constantine (Cicely Tyson), and another weak subplot involving Skeeter’s relationship with the smarmy Stuart (Chris Lowell), an upperclass asshole whom she is initially repulsed by and then decides she likes. Naturally, he is later turned off by her sensibilities.
There have been some criticisms about the lack of black male voices in this film – and there were a few instances where Henry (Nelsan Ellis, True Blood), a waiter who works alongside Aibileen and Minny, is also at the fore of acts of discrimination, most notably on the night when Medgar Evers, a civil rights activist, is assassinated in Jackson. Aibileen and Henry are forced off a bus and have to find their own way, while the tragic death prompted more of the women to speak up about their experiences. It would have been great to see his character developed a little more, and also perhaps the completely absent character of Minny’s husband, who is disgusted that she had lost yet another job and it is implied that he hits her on one occasion, before enlisting their oldest daughter to leave school to assist with income. 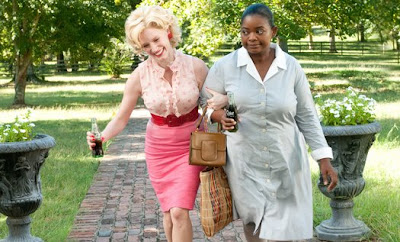 But it's a nice story, the first half of the film is very strong, and there are several genuinely heartbreaking moments; Charlotte’s revelation about her dismissal of Constantine and her later fate, the arrest of Hilly’s maid following her attempted sale of a ring she found wedged behind one of the couches, and Aibileen’s final act of courage. It’s powerful stuff, and much more profound than the film’s trailer - which focuses more on the comedic aspects of the film, though these work well too – would have one believe. All of these women are in some state of desperation, whether it is saving every penny to send their sons to college, or finding the courage and willpower to stand up for their values and oppose years of abuse.
I was impressed by Stephen Goldblatt’s simple, but clean cinematography, which effectively accentuates the bright colours of the costumes and the décor and the 60’s suburban prissiness, but it’s the fantastic female cast that give this film the biggest lift. Viola Davis is the heart and soul of the film and manages to elicit purely through her body language, this sense of weariness and frustration, but also a recognition of the responsibility for the child in her care and a determination to make sure she grows up right. Her moments of pain-behind-the-eyes glee when interacting with the young girl are effortlessly powerful. 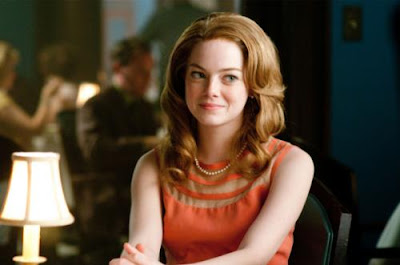 I really like Emma Stone and it is great to see an actress as young as her (in fact, she’s a few months younger than me) finding her place. She gives another solid performance here. The expertly cast Bryce Dallas Howard, whose turn here is very unexpected, plays a conniving menace of a woman, whose blatant racism is quite appalling. Octavia Spencer is equally good as Minny, and one particular confrontation between the two women will likely raise uproarious laughter.

Rounding out this fine cast is Jessica Chastain, who has a face for the ages. In a complete turn-around to her equally wonderful performances in The Tree of Life and Take Shelter (where she 'should' receive an Oscar nomination), she plays a flighty, cooky housewife with serious self-esteem problems, which are accentuated by the other women's rejection of her, considering her to be 'white trash'. Apart from Skeeter, she is the most humanitarian of the white women portrayed here, and is compelling whenever she is on screen.

I enjoyed The Help a lot more than I expected. Lusciously photographed and featuring some extraordinary performances, its an inspiring humanitarian story that effectively blends humour and heartbreak. You can't help but find some level of enjoyment here. Don't be surprised to see some recognition come Oscar time, too.