There are some truly horrifying atrocities that occur in the world we live in. Hearing of some of the harrowing things that take place can rattle you to the bone. Human trafficking, and in particular, underage female sex trafficking, is one of the most prevalent organized crime syndicates in the world. It is stipulated at the conclusion of The Whistleblower, that there is an estimated 2.5 million people being trafficked every year. That is an astounding statistic. 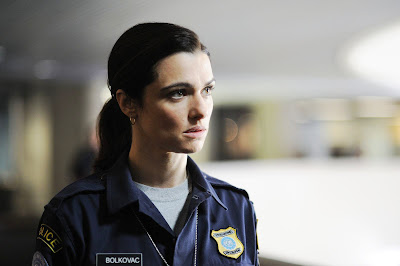 Just as astounding, is Larysa Kondracki’s chillingly effective examination of a trafficking syndicate present in Bosnia, which, it is revealed, involves various levels of the military, including United Nations Peacekeeping Forces and troops assigned by a U.S Military Contractor (based on the true-to-life, DynCorp International). These heinous crimes and the repulsive treatment of women (not just through the sex trade, but also in cases of domestic violence and abuse) in Bosnia are given a blind eye. Though it’s a little unevenly structured, introduces a few too many characters with undefined motives, and possesses some ugly camerawork at times, The Whistleblower is a maddening film, and a tense, affecting thriller.

Kathryn Bolkovac (Rachel Weisz) is a competent Nebraskan policewoman, whose dedication to her profession has resulted in her separation from her husband and loss of custody of her daughter. Her subsequent attempts to be transferred to a precinct closer to her daughter have been in vain, and when a high-paying opportunity to work in Post-War Bosnia with a UN Peacekeeping mission arises, she accepts it wholeheartedly. Introduced to her predominantly male colleagues, she bonds with one (an unnecessary romantic interest, I thought), and soon learns that many of them are corrupt, misogynistic sleaze balls, and altogether unlikable. Above all, unlike her colleagues back in Nebraska, they can’t be trusted.

Her investigation of a domestic abuse case as part of her peacekeeping ‘monitoring’ reveals that neither the local cops nor her new colleagues care too much about women, even finding herself the subject of sexual taunting. Kathryn begins to investigate a sex trafficking ring; when her suspicions surrounding a raid of a brothel lead to a shocking discovery and ties to her superiors. She uncovers more evidence and nearly secures a pair of direct testimonies - a parallel plotline featuring Raya and Irka, two Ukranian girls who end up as captives of the traffickers, forced into prostitution to repay a ‘debt’ and have their lives threatened when they disobey. This grim tale has an ever-present sense of unease and tension, as we watch Kathryn get deeper. It is punctuated by several near-unwatchable moments in the second half. This is also stellar work by Weisz, who helps overcome a few structural shortcomings and heavy-handed melodrama, to ensure this remains an unsettling and memorable political thriller.

Rachel Weisz is an alluring and compelling screen presence. Over the years (since I first saw her in The Mummy) she has developed into a reliable lead capable of carrying a film. Her excellent performance in The Constant Gardner alongside Ralph Fiennes won her a Best Supporting Actress Oscar, while she was the standout in the otherwise mediocre Agora. Here, she is fantastic as a relatable heroine desperate to save these girls from their diabolical treatment, and bring those ‘immune’ from prosecution to justice. Risking her job and her own safety, she utilizes little to no support and is constantly overthrown by corrupt branches of her department, who are either directly involved, or trying to protect the affairs of the agency. Her dutiful desperation and crippling frustration is convincing and powerful.

The film’s supporting players, which include Vanessa Redgrave, David Strathairn, Monica Bellucci, Benedict Cumberpatch and David Hewlet, all pop up from time to time. All of them are shady (and I figured would wind up being villains) and provide an array of antagonism and assistance to Kathryn’s endeavors. Strathairn was particularly suited to his role, though I feel I have seen him play this character a number of times – The Bourne Ultimatum springs to mind. Vanessa Redgrave, who plays Madeleine Rees, an official of the Human Rights commission, was also compelling, but her character was undefined. Monica Bellucci wasn’t required at all in a small role as a Democra Corp Agent who seemed to care little about obstructing Kathryn’s investigation. The others I immediately assumed were villains, so the surprise of such a fact wasn’t as effective as was intended. It became blurry as to whether the troops actually condoned trafficking or whether they were threatening out of a desperation to keep their names clean. 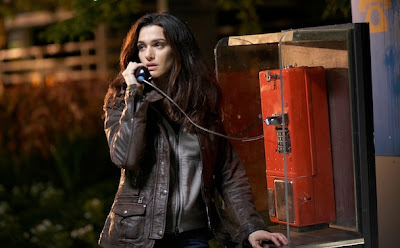 Films based on fact often walk a tight line between too real and feeling like a documentary, and deviating from the realism for the benefits of storytelling. I think The Whistleblower remained pretty grounded in it's accuracy; both with the characters, the uneasy subject matter and the raw photography that placed the audience in the thick of the action. You will be pretty hard pressed not to leave the cinema feeling angry, especially knowing that the company whose troops were involved in sex trafficking in Bosnia, are still under contract with the U.N. While The Whistleblower isn't perfect, losing a few points for the shallow supporting characters, it makes up for it by leaving an impression and recognising some serious worldwide issues.