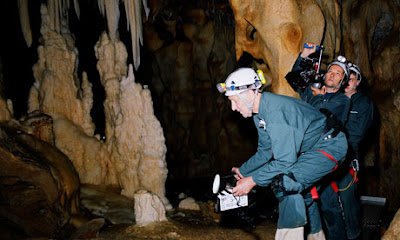 There are five new releases hitting Australian cinemas today. I'm a day later than usual on posting this. I blame watching films. The lineup isn't strong I'm sorry to say. The films hitting cinemas are Abduction, Monte Carlo, Spy Kids 4: All the Time in the World, The Lion King 3D and The Cave of Forgotten Dreams. I read somewhere that Tabloid was also released this week, but that must have been changed. Honestly, unless you desire watching The Lion King in 3D there is only one film worth seeing here - The Cave of Forgotten Dreams.
Abduction - I have already expressed my dislike for this film following the trailer. The film's promotional poster, which looks like an outtake from Transformers: Dark of the Moon is no better. There is no way I am seeing this film. For as long as he can remember, Nathan Harper (Taylor Lautner) has had the uneasy feeling that he's living someone else's life. When he stumbles upon an image of himself as a little boy on a missing persons website, all of his fears come true: he realises his parents are not his own and his life is a lie, carefully fabricated to hide something more mysterious and dangerous than he ever could have imagined. Just as he begins to piece together his true identity Nathan is targeted by a team of trained killers, forcing him on the run with the only person he can trust, his neighbour Karen (Lily Collins). No.
Monte Carlo - I saw the trailer for this today. Three graduates fulfil their dreams of vacationing in Paris. They accidentally find themselves in a lavish world, when one of them is mistaken for someone famous I believe, where they live like royalty and experience romance. But at the end of their journey they discover the true magic of friendship. Of course. Again there are five writers assigned to the project with the cast headlined by Selena Gomez, Leighton Meester and Katie Cassidy.

Spy Kids 4: All the Time in the World in 4D - Hasn't this franchise run its course. It now stars Jessica Alba and Jeremey Piven. Ugh. Alba stars as Marissa, a retired Secret Agent, whose life is turned upside down when a maniacal timekeeper (Piven) threatens to take over the planet. She receives some help from some very familiar Spy Kids, Carmen (Alex Vega) and Juni Cortez (Daryl Sabara), who may be able to simultaneously save the world and bring their family together at the same time.
The Lion King 3D − The beloved 1994 Disney classic is given a new 3D life. I watched it recently and it wasn't as good as I remember from my childhood - but still a groundbreaking achievement and one of the finest animated features Disney produced in the 90's.
The Cave of Forgotten Dreams - Werner Herzog's most recent film follows an exclusive expedition into the nearly inaccessible Chauvet Cave in France, home to the most ancient visual art known to have been created my man. It's an unforgettable cinematic experience that provides a unique glimpse of the pristine artwork dating back to human hands over 30,000 years ago - almost twice as old as any previous discovery. This is some of the most effective use of 3D I have seen so far and Herog's infectious enthusiasm, as well as the assortment of experts he interviews and who accompany him into the caves, make this very enjoyable.
My Recommendation: The Cave of Forgotten Dreams. Oh, if you haven't seen Red Dog, it's worth a look. Or, if you're desperately after a film, perhaps turn to the Italian Film Festival. Screenings of 20 Cigarettes and Corpo Celeste are recommended.
Seriously, how bad does this look?
Posted by Andy Buckle at 6:57 AM