Tom Stall (Viggo Mortensen) is a family man and regular American citizen. He has a loving wife (Maria Bello), two children (Ashton Holmes and Heidi Hayes) and he owns a diner. As a respected local, his life is plunged into turmoil when two violent men wielding guns enter his store, threaten his staff and attempt to rob him. As if compelled by natural instincts, inner strength and an unnatural fearlessness, Tom diffuses the situation by shooting both men. He becomes a local celebrity with his face and news of his heroics plastered over various media. 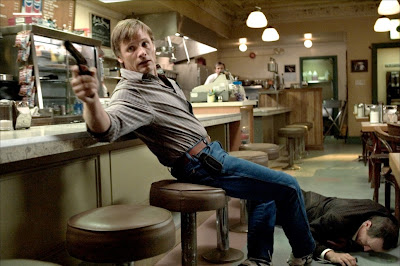 What is quite interesting about this film is the media reaction to violence – seeming to condone his act, which was a risky decision, and entirely in self-defense. Having just watched Super, another film where civilian violence is applauded, the success of A History of Violence emerges through it's examination of how violence is condoned, both on a societal level and by the individual, and how it is controlled in the household environment. Would there have been the same reaction if Tom's past was known? Soon enough, those aware of such things turn up to antagonize Tom and his family. Carl Foggarty (Ed Harris) a scarred businessman with ties to the East Coast Mafia, including the ruthless Richie Cusack (William Hurt) arrives in town claiming that Tom’s real name is Joey Cusack and creating unease within Tom, who realizes the past he had been so successful in evading, has surfaced.


During the film, characters are forced to resort to violence under a number of circumstances, and for various reasons, but Cronenberg, who has configured violence into nearly all of his films, remains adamant it is part of the cycle of society. Tom Stall, when he was Joey Cusack, is employed in organized crime to make a living. The two robbers we are introduced to at the beginning (in a spectacular single-take sequence) are naturally violent in nature, and seem to revel in killing people for no reason. To make a quick buck, they have few other options but to utilise their inclinations for violence. Tom, faced with the possibility of harm coming at first to his work colleagues, and later his family, protects them by reciprocating violence, while Jack’s brutal beating of the bullies at school is the only way to be rid of their incessant mistreatment. 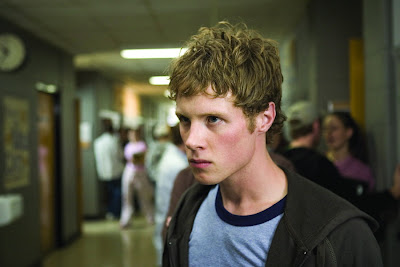 Just as Tom's hidden tendencies come to the fore, his sexual relationship with his wife makes a transition. Early in the film they share a passionate and tender sexual experience, with Tom passive and allowing his wife to make the advances. Later, in a near-brutal sex scene on the stairs, Tom, trying to demonstrate that he still has passion for his wife, forces himself upon her. She resists her struggles, but remains repulsed by his change. The violence depicted throughout the film is horrific, and could be considered gratuitous, but anyone familiar with Cronenberg will know that this sort of thing is his specialty.

Another sequence I want to bring attention to is the conclusion, which is one of the best endings to a film I have seen. Who’s to know that the reign of violence that has plagued their lives for the brief period of the film is over? Who’s to know that associates of Joey’s brother aren’t going to continue coming after him? But the heartfelt moment that ends the film – with his daughter setting up a plate for him, and his wife, who can’t bear to look at him, finally accepting him back - is a perfect conclusion to the film. 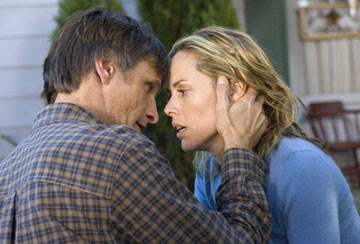 While Cronenberg’s resume is strong, this might be my personal favourite. Though, having said that, there is a case to be made for The Fly and Eastern Promises. William Hurt, for his very brief cameo, was nominated for Supporting Actor (which was an odd decision, considering that Viggo Mortensen, who had never been better to this point, was overlooked in the lead). The screenplay, adapted by John Olsen from the graphic novel by John Wagner and Vince Locke was also honoured. Tackling an important theme in a grounded context, Cronenberg has built a well-paced and compelling drama featuring several excellent performances.