Kriv Stenders’ Red Dog has quickly become a national success. Based on an extraordinary true story and adapted for the screen by Louis de Bernieres and Daniel Taplitz from de Bernieres’ novel, Red Dog has become one of the highest grossing films in Australian cinema history. Having well exceeded its budget of $8.5 million, the film’s steady box office numbers - nearing two months released, it was still number four this week in Australia wide gross - has emerged through positive and enthusiastic word-of-mouth. I have heard nothing but great things about the film and even my father, a man who doesn't venture to the cinema often, strongly urged me to see it. Having seen it today, I must say I was not disappointed. Full of surprises, Red Dog was inspirational, emotionally involving, heartfelt, moving, and above all, hugely enjoyable. 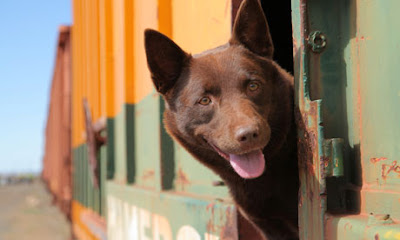 The story begins with a truck driver, Thomas (Luke Ford), stopping at a bar in Dampier, Western Australia. Upon entry, he first believes the bar to be deserted, but then spies a group of men about to put down a kelpie that they declare has been poisoned. Rather than killing the dog, they decide to call the local vet just to be sure. Thomas soon discovers that the dog, named Red Dog, is a famous icon in Dampier, and a number of local miners begin to turn up at the pub to pay their respects, having heard that their beloved friend might not survive the night. They begin to share their heartfelt stories, both as a joint reminiscence, and to the interested stranger who has entered their community that night.

The first to tell their story is Jack Collins (Noah Taylor), the bar owner, who reveals that he and his wife Maureen had discovered Red Dog on the road to Dampier. Intuitive, friendly and loyal, he gradually started to befriend the local miners, who bonded over their united connection to the kelpie. Each of the principle characters, including Vanno (Arthur Angel), an Italian immigrant with a fondness for reminiscing about his Italian homeland, Peeto (John Batchelor), a warmhearted and jovial individual, and Jocko (Rohan Nichol), a man still overwhelmed by the loss of his wife and daughter in an accident, tell how Red Dog changed and influenced their lives and united the disparate community. 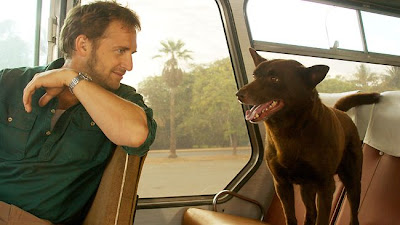 The also men tell of an American named John Grant (Josh Lucas, who I recognised from American Psycho), who became Red’s official owner. He was the bus driver for Hammersley Iron, the company the miners worked for, and forged a relationship with Nancy (Rachael Taylor), the company's young secretary. Tragically, John was killed when his motorbike skidded off the highway, resulting in one of the films many emotionally affecting moments. Red Dog, ordered to stay sitting on John's porch until he returned, waited three weeks before venturing out into the Western Australian wilderness (and being spotted in Darwin and Perth) in search of his master. This is how his infamy spread. A statue of Red Dog was erected at the entrance to Dampier in 1979 and still stands to this day. Anecdotes and stories were first compiled by Australian author Nancy Gillespie and then later by British author, Louis de Bernieres, whose attention was attracted when he passed through Dampier and spotted the statue.
In short, Red Dog is a very good Australian film. The amusing and tragic adventures of these likeable rough-around-the-edges miners produce many emotions in the audience, and you can't help but be touched by the unique tale. The way that the dog is captured; his very real personality, and his ability to communicate emotions to the humans solely through a look he gives or a flicker of his ears, is extraordinary. On top of that, it is a beautiful looking dog. I was a little concerned by the structure initially; because the use of an out-of-town stranger as an eager listener to recounted tales has been done before, but by having Red Dog kept in the back room of the pub meant that everyone who assembled there throughout the night, had a reason. Knowing that he is unlikely to survive the night, they each honour their fond memories of Red Dog, and share their united love for him. The characters are all developed effectively, and though they feature most heavily in their own accounts, the kinship between the men is really well envisioned. None of the performances are particularly good, but the hammy performances evoke plenty of humour, and the film's affecting moments shine through the Koko the dog. 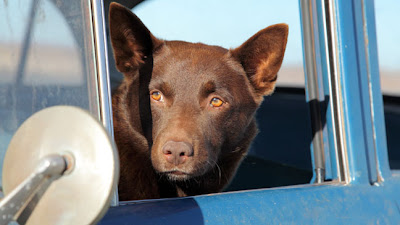 What I felt let the film down a little were the villainous groundskeepers and 'Red Cat'. While I am sure these figures existed, their eccentricities were accentuated for the benefits of drama and came across as cheesy. The fight between the two animals also undermined some of the grounded storytelling, because it is one of the few moments where you look on and feel disbelief. Another feature I felt weakened the film slightly was the overuse of montage. The first half of the film, though really enjoyable, felt like a series of montages accompanied by classic rock songs - which had a 'music video' effect. Having said that, the songs were great and the score by Cezary Skubiszewski was very effective and heightened the affecting moments.
But, another reason why this film is so great for Australia is the way it really makes use of the beautiful rust-coloured landscape of the outback. Geoffrey Hall's photography is excellent (I assume he used a RED camera) and the captures of Red Dog traversing the landscape possess an ethereal quality, and really bring to life the vast desert regions. Red Dog is a warmhearted crowd pleaser and is easily one of the best family films I have seen this year. I am sorry that I didn't see it sooner, but it will likely continue it's theatrical run for a few more weeks. There is a reason it has made $16 Million at the box-office. Be sure to catch it before it closes.