Having earlier in the year watched The Red Shoes, the 1948 masterpiece from The Archers - the filmmaking duo of Michael Powell and Emeric Pressburger - and Peeping Tom, which is the controversial film that ended Powell’s career in Britain, I sure was intrigued when Anna at Defiant Success and James at Cinema Sights recommended Black Narcissus to me, claiming it to be the best of the three. I decided to watch it immediately. I was absolutely blown away. Who would have thought that a film released in 1947 and focused on nuns would be so erotic? I have seen this film listed pretty high on ‘All Time’ lists and it now comes as no surprise. 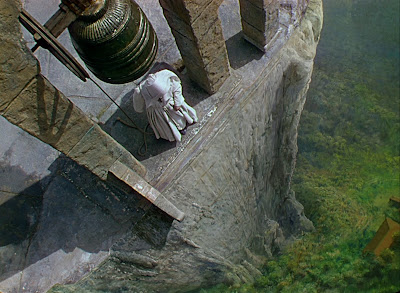 Black Narcissus is based on the novel of the same name by Rumer Godden, and tells the story of a group of Angelican nuns who travel to a remote Himalayan location (The Palace of Mopu) to set up a convent – a school and hospital for the local community. Despite the fears of the Reverend Mother that she is too young to be assigned such responsibility, Sister Clodagh (Deborah Kerr, outstanding) is enlisted as the Sister Superior, and is joined by four other sisters who each possess unique abilities and personalities. Sister Phillipa (Flora Johnson) is a gifted gardener, Sister Briony (Judith Furse) is a nurse, Sister Honey (Jenny Laird) is cheerful and popular teacher, while Sister Ruth (Kathleen Byron), ill and mentally unstable, is sent along in the hope she will be healed by the change.

But it immediately becomes clear that this venture will not be as fruitful as expected, and the good-intentioned Christians meet failure in every way. Clodagh discovers that the pupils are being paid to attend the classes by the local Maharajah, and based on the advice of a roguish Englishman, Mr Dean (David Farrar), Briony only doctors minor cases in the fear that her failure to save a patient will result in the abandonment of the convent. Throw in the fact that the building was once a harem (and still adorned with erotic portraits), and the consistent presence of the handsome Mr Dean, who is usually in some state of undress, results in the nuns falling victim to the sensuous atmosphere and the mounting tensions of their claustrophobic society. 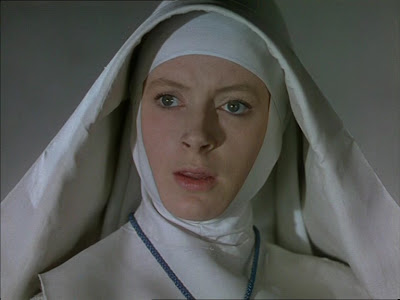 Clodagh, whose flashbacks depicting her life before becoming a nun and a failed love affair were banned in the version originally shown to U.S audiences, remains haunted by the lost love, but battles the deranged and fiercely jealous Ruth for the affections of Mr. Dean, while trying in vain to maintain her icy, strict veneer and keep the mission together.

Initially repulsed by his disreputable state and disrespect for their habits, Clodagh soon discovers she needs Mr. Dean around. Every conversation between the two is charged by her suppressed desire and his demeaning attitude but subtle flirting. There is a supercharged tension that continues to mount in nearly every sequence of the film - Sister Phillipa desires a transfer, and Clodagh is constantly at odds with Ruth. The homicidal jealousy of the latter results in a thrilling culmination in the vastly different, but extraordinary third act. 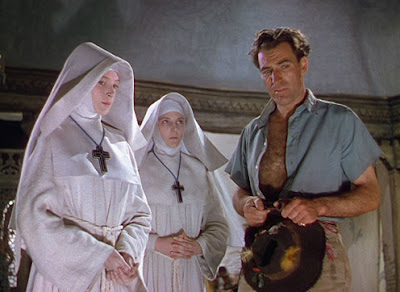 Powell was Martin Scorsese's primary inspiration, and I read that the two eventually became quite close. This extravagant, passionate and surreal film is brilliantly structured. The Technicolour photography from Jack Cardiff (which he won an Oscar for, along with Alfred Junge for Art Direction) is astoundingly beautiful, and it is near unfathomable to think of this film as being released in 1947. The puritan white of the nun's clothing and their convent is opposed by the vibrant colours of the local indian populace. Every sequence is framed to perfection, with the close-ups of Deborah Kerr's luminous features more than revelatory, and the subtle adjustment in tone to suit the changing nature of the film extremely impressive. Some of the techniques used in the films latter half would be of high-quality in any horror film. What is also impressive is that a large portion of the film was shot in a studio, with the audience convinced that the convent overlooks a valley and is surrounded by the Himalayas.
The film is cynical and funny on occasions, and the film effortlessly draws the pieces together (and the flashback sequences are essential, so I can't imagine watching this film without them) to create a brilliant character study that delves into a plethora of themes - suppression vs. desire and holiness vs. the wild. As soon as the nuns arrive at the convent and begin their preparations, there is an immediate sense of dread. We don't know where it comes from - it's drafty, almost like this is a dark force riding through the convent on the breeze. The performances are all outstanding, especially Kerr and Byron, but May Hallett is also great as a cackling Ayah who constantly reminds the nuns of the building's former function. Sabu and Jean Simmons (Spartacus) also appear as the Young General and 'heir to the throne' and his lower-caste infatuation. 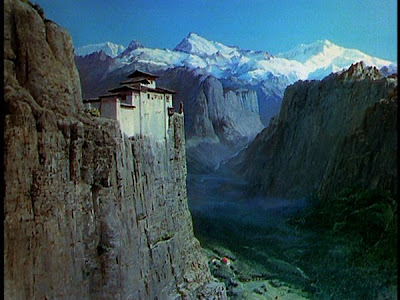 While I haven't watched many films about nuns, I think you would be hard pressed to find a more compelling film than Black Narcissus. If you desire beautiful Technicolour cinematography, watch this alongside Powell and Pressburger's The Red Shoes (Darren Aronofsky's primary influence for Black Swan). They would make for a great double feature. While making a 'Top 100 Greatest Films of All Time' list is near impossible, any list that excludes this film has got it wrong. It's truly wonderful.
Posted by Andy Buckle at 3:50 PM