From the words of Jodie Foster in her review of La Haine in Shooting Down Pictures, “in a Europe so saturated with American culture and its media barrage of violent images, there is a young disenfranchised generation emerging from the embers. La Haine examines one that has its own identity; its own wounds…” La Haine presents a nightmarish glimpse of how its three male protagonists attempt to survive in a racist milieu of surveillance, exclusion and annihilation, with a central message explicitly about an impending crisis for French society. By adopting a ‘realist’ aesthetic and depiction of a savage 24 hours in the lives of three racial minorities of France, the film makes visible ‘a social time bomb ready to explode’ (Sanjay Sharma, ‘So Far So Good: La Haine and the Poetics of the Everyday) in the decaying multi-racial suburbs of France, torn apart by racial and class division. For these youth, the crisis is of the order of the everyday and the practices of marginalisation, brutalisation and racial terror are integral to their lives. Their hardiness, and embedded anger at their situation is important in maintaining a balance of power on the streets, and the trio utilise it to stand against the police force, which function in the film as a gang of their own.  La Haine’s appeal is evident through its embellished realism; coupled with an arresting hip-hop/rap soundtrack. 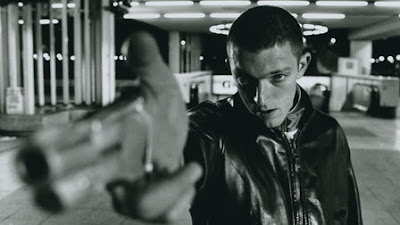 The fast-growing subculture of American hip hop is finding its way into more and more Hollywood productions and becoming a commodity internationally. There is a strong representation in films such as Do the Right Thing by Spike Lee (1989) and Boyz in the Hood by John Singleton (1991). It is the most accessible form of hip-hop in the world, placing emphasis on ghettos, guns, drugs and sex in the lyrics. This influence within the French ghettos is realised through Kassovitz’s film, as he makes a comment about youth culture in the banlieue through this American influence. In the tradition of the American hip-hop cinema the film is cut around the soundtrack, but Kassovitz has subverted this by using the sound ‘within’ the action and using it in a way of reflecting the use of American hip-hop ‘within’ French culture, but not driving La Haine through the music.

One such example is the appearance of the American hip-hop artist Cyprus Hill’s logo on the back of the French DJ’s shirt, who mixes the sounds of KRSI’s ‘Sounds of da Police’ with France’s Edith Piaf. Largely, though, the soundtrack is localised to include French hip-hop, but the translated American influence is certainly important. Following this mix, and as it remains playing, there is a wonderful aerial camera movement across the banlieue eventually arriving at Said and Vinz, signifying hip-hop’s spreading influence, and close ties to the French ghettos. The array of music is ‘the principle modality through which the imaginary of a fleeting utopia can be experienced.’ (Sharma) The embattled youth counter the forces of surveillance through self-expression and performance that punctuate the everyday of their cultural survival. In another scene we hear the sounds of approaching police vehicles, which sends everyone in the building running, but the camera zooms in and remains on a lone break-dancer, who seems oblivious to the danger, and is absorbed both with the music and his artistic expression. 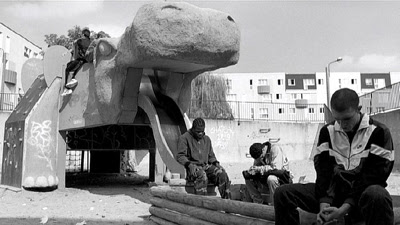 Martin O’Shaughnessy in his essay ‘Eloquent Fragments: French Fiction Film and Globalisation’ makes the comment that “the film connects to global spatiality” with most of the cultural references directed toward the United States, both in the scene where Vinz imitates Travis Bickle’s famous “are u looking at me?” scene in Martin Scorsese’s Taxi Driver, and in the more sustained influence of hip-hop culture. The characters find themselves in a much more restricted spatial frame than that constructed through the films trans-national referencing. As a further emphasis on this global view we can look at the stereotypes of the ghetto youth and the polar opposing choices of the ethnicities of the central trio. The opening sequence of the Molotov cocktail igniting the entire planet suggests that these types of conflicts (shown in the opening news footage) will ultimately engulf the world. This image of Earth again appears on a billboard that announces ‘the world is yours’ changed by Said to read ‘the world is ours’. Since its release it has been considered a controversial French film, as it challenged France’s ideas of itself as a nation. It establishes a non-specific national identity, forcing audiences to look at these issues in their own country. “Against the voyeuristic, impotent and normalising gaze of reality media, the film presents a particular image of the social crisis,” (Sharma) which disrupts the boundary between ‘us’ and ‘them’, the audience and the French youth depicted in the film.
La Haine breaks down the ideas implemented by Benedict Anderson and the ‘imagined community’ realised through the ‘Parisian’ films of high-culture France. The youth’s constricted mobility “gives the lie to the utopian promise of a poster that offers access to the globe as commodified space.” (O’Shaughnessy) Near the end of the film Hubert tells the story of a ‘society that is falling’, thus rendering explicit what is suggested at the beginning of the film, that France is descending into civil war. His emphasis on the ‘landing’ as being the most important part of the story is brutally realised in the final scene, as the characters have finally accepted the need to step back from further possible fall, only to find themselves suddenly plummet as Vinz is shot, and Hubert and the cop face off at the conclusion, before the film ends zoomed-in on the horrified eyes of Said. We see him clench his eyes together, and hear one discernible shot, leaving the viewer guessing as to whether Hubert’s gun, with two missing bullets, actually fired. O’Shaughnessy comments that “when national society ceases to provide cohesion and meaningful connectivity to a larger unit, what remains is the brute collision of global forces and local resistance” (realised in the opening image of the Molotov cocktail). As a viewer you get the feeling that the entire film is a freefall towards a violent climax. 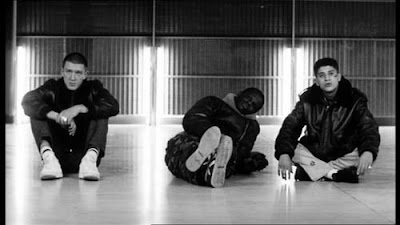 When examining La Haine’s use of montage, Sanjay and Ashwani Sharma write that: “Kassovitz fails to recognise fully the limits of an aestheticised realism which is most marked in the film’s lack of historical consciousness. The ‘realism’ of La Haine effaces the necessity to situate the racialised crisis of the banlieue as the product of decolonisation in France and contemporary postcolonial conditions.” Sergei Eisenstein, writing about the Soviet school of montage describes it as “a means of achieving a unity of a higher order – a means through the montage of achieving an organic embodiment of a single idea conception, embracing all elements and details of the film work.” It is my argument that La Haine adopts the Soviet school of montage as it visibly explains the responsibility for society being the way it is. We are confronted with causality for the narrative, and a socially responsible montage, making the above statement problematic. The American montage, as mentioned earlier, utilises parallel organic editing consisting of two never-converging binaries, but no causality for the narrative. We see an example of this style in the scene near the end when Vinz pulls the gun on the skinheads and threatens to kill one. We see the camera facing down the barrel of the gun showing the scared and bloody face of the skinhead, then we see the opposing view, a POV of the skinhead (with the gun positioned at centre) that sees Hubert taunting Vinz into killing him. Throughout the film, the presence of the gun has been important, but in this scene it shows both the power of the owner and the vulnerability of those used against. In most cases this can be read to reveal the power of the police over the gangs, not one gang over another. The extremity of the conflict can be realised as predominantly racial, as the tensions between gangs within the ghettos threaten to be more serious than those between them and the police.
La Haine’s ‘hyper-realism’ is a part of an aesthetic strategy to signify the subjective experience of living in the banlieues, much like Winterbottom brings a subjective experience to his characters as they move through London in Wonderland (1999). So great was Kassovitz’s desire to capture the reality of the banlieue that he went into the ghettos to film these sequences, and selected the vast majority of the film’s cast from its residents. The film cannot, however, be said to be a realist work in the way a film like Rosetta can, since Kassovitz’s use of the camera and his American-influenced stylised editing techniques draw constant attention back to presence of the camera and the film. Ginette Vincendeau points out that the entire film is permeated with self-conscious uses of the camera designed to represent visually the disorientation felt by the characters. Among these, she describes, are the compressed zoom of the three standing on the rooftop, and the 180-degree pan in the police station. Another technique used by Kassovitz is contrasting the banlieue (largely filmed through close-ups) with Paris (through longer shots), presenting the characters as seeming out of place in the city. Despite the slickness of montage and the construction of the mise-en-scene, La Haine’s primary objective is to draw attention to social reality, making the film a wonderful and complex exploration of an important social issue that utilises a variety of visual possibilities to comment on the harsh reality it depicts. 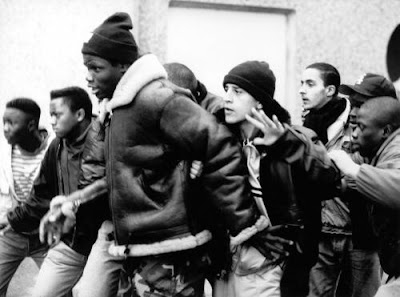 Dancer in the Dark carves out an arena for critique within the very discipline or genre it perpetuates. Though on the surface the film may disrupt the conventions of the musical genre with its melodramatic plot and disorienting stylistic quirks, it is deeply implicated in Hollywood tradition. La Haine comments on the influence of American culture in Europe, particularly the use of hip-hop and rap in the French ghettos, which is then subverted to document a significant time of conflict in France’s recent history, but also to reflect this breakdown of society back to the rest of the world. During a period of New European cinema, when filmmakers are developing new innovative methods of commenting on the world they inhabit and rejecting organic filmmaking, both Von Trier and Kassovitz have adopted different methods of approaching American cinema as a way of subverting past cinematic traditions.
Posted by Andy Buckle at 9:18 AM