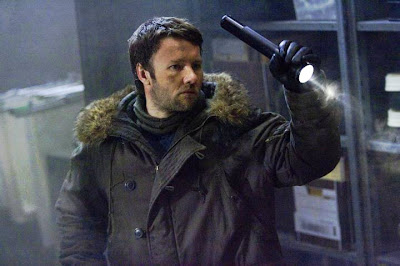 Before I begin the rundown of new releases, the nominees for the 2011 Jameson IF Awards have just been announced. Up for Best Picture are Face to Face, Red Dog, Oranges and Sunshine and Eye of the Storm. No Snowtown. That is outrageous. All I can say is: Go Red Dog. For a full list of nominees, click here.

I believe there are five new Australian releases tomorrow - The Thing, What's Your Number?, Take Shelter, Red State and The Cup. I have only seen one, and I have this compulsion to see The Thing, The Cup and Red State. The question is...when? I have a busy week ahead.

The Thing - There is very little chance of me liking this very much, because John Carpenter's The Thing (1982) is one of my favourite films. The first trailer I watched looked very much like Carpenter's, but the film is actually a prelude to the Carpenter classic. Palaeontologist Kate Lloyd (Mary Elizabeth Winstead) has traveled to the desolate region for the expedition of her lifetime. Joining a Norwegian scientific team that has stumbled across an extraterrestrial ship buried in the ice, she discovers an organism that seems to have dies in the crash eons ago. When a simple experiment frees the alien from it's frozen prison, Kate must join the crew's pilot, Carter (Joel Edgerton), to keep it from killing them off one at a time. In this vast, intense land, a parasite that can mimic anything it touches will pit human against human as it tries to survive and flourish.


What's Your Number? - Ana Faris is Ally Darling, who after reading a magazine article that leads her to believe she's going to be forever alone, begins a wild search for the best "ex" of her life. While Ana Faris usually has great comedic talents, this premise sounds atrocious and it's likely to be unendurable.

The Cup - Remember when Media Puzzle won the 2002 Melbourne Cup? Remember that his jockey, Damian Oliver, had recently lost his brother in a riding accident? It was a tragic, but uplifting tale - and a very exciting Melbourne Cup. Well, The Cup is based on these events, focusing on the brothers, Damian (played by Stephen Curry) and Jason (Daniel MacPherson). Brendan Gleeson also stars as Media Puzzle's owner, Dermott Weld (I'm assuming). Early reviews have not been positive though, I'm afraid.

Take Shelter - I have been waiting since SFF to see this again - and it is still one of the best films I have seen in 2011. A haunting, slow-burning psychological thriller that is genuinely terrifying at times and links the apocalyptic fears of the protagonist to contemporary American ones. Curtis Laforche (Michael Shannon) lives in a small Ohio town with his wife Samantha (Jessica Chastain) and six-year-old daughter Hannah, who is deaf. Money is tight and navigating Hannah's healthcare and special needs education is a constant struggle. Despite that, Curtis and Samantha are in love and their family is a happy one. The Curtis begins having terrifying dreams about an encroaching, apocalyptic storm. He chooses to keep the disturbance to himself, channeling his anxiety into the obsessive building of a storm shelter in their backyard. But the resulting strain on his marriage and tension within the community doesn't compare to Curtis' private fear of what his dreams may truly signify. Michael Shannon and Jessica Chastain are outstanding. Take Shelter is a must-see.

Red State - There have been some very mixed reports coming for the new Kevin Smith flick - you know, the guy that created one of the most annoying characters in history with Jay (Jason Mewes) and loves to make crude comedies about stoners. I can't say I am a Kevin Smith fan, though Clerks is excellent, and I did find Dogma to be quite amusing. Here, I believe he has switched into horror-badass mode, and has built something genuinely shocking. Red State unfolds in a small town dominated by a fundamentalist preacher, Abin Cooper (Michael Parks). It tells the story of three high school boys who, on their way to an internet arranged meeting with a woman, end up crossing paths with Cooper. The encounter sets into motion a series of events that causes all hell to break loose. I was just thinking that there haven't been too many good horror films released in 2011. Insidious was fun, I guess. There sure is some potential this week.


Weekly Recommendation: Take Shelter is the must-see of the week. I can't wait to check it out again. But Red State and The Thing would make a great double-feature on a Friday night - despite my fears that neither will be great. The Cup will be accessible easy-viewing, but it looks a bit too much like a tele-movie, and may be one to skip, unless you are a die-hard horse racing fan.
Posted by Andy Buckle at 12:56 PM