Classic Throwback: A Woman is A Woman (Jean-Luc Godard, 1961)

The second film of this self-appointed Godard endeavour was his 1961 work Un Femme est une femme [A Woman is A Woman] starring Anna Karina, Jean-Paul Belmondo (Breathless) and Jean-Claue Brialy. To say it is an odd film is an understatement. I'm sure many have claimed it to be self-indulgent and pretentious too. I enjoyed A Woman is a Woman and found it to be unique, playful, witty, funny and generally successful in it's intentions - functioning as a French social commentary and a clever tribute to, and subversion of, the American musical comedy. It's also Godard flaunting his cinematic intellect and obsessively subverting the mechanics of the medium. 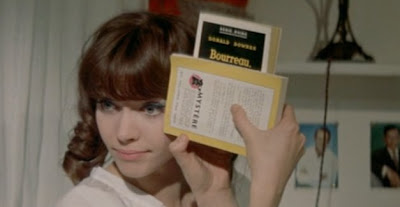 A Woman is A Woman centres on an exotic dancer, Angela (Karina), and her lover Emile (Brialy). They live together in a Parisian apartment and despite Angela expressing her spontaneous desire to have a child, Emile refuses to consent to marrying her, seemingly content with their relationship. Somewhat intentionally, Angela forces Emile's buffoon of a best friend, Alfred (Belmondo), to fall in love with her, thus setting up a love triangle. He follows her around like a lost puppy declaring how much he loves her while trying to force Angela to end it with Emile, the man she clearly loves more.

Fresh from his black and white crime noir/romance, Breathess, Godard instead makes use of loud, vibrant colour here. The experimental and playful use of intermittent sound is also a strange feature, with loud bursts of score (from composer Michel Ligrand) existing in between almost every line of spoken dialogue, only to subside when the characters speak and converse. Angela and Emile never seem to have a proper discussion either, choosing to argue about trivialities such as the way Angela pronounces the letter 'r' and using the titles of books taken off the shelf to communicate with one another.

The rhythm of the film is skilfully crafted and maintained; through the use of the music, the way the actors occupy the space of the apartment (where the film is primarily set) and utilise objects in their surroundings, and their delivery timing. There is frequent motion in this film - the actors are almost always emotive in some way - whether they are walking down the street or in Emile's case, cycling around the apartment - and Godard's camera is relentlessly moving, swerving in and out of rooms and offering an array of innovative angles and manoeuvres.

Karina (just 21 at the time) and Jean-Paul Belmondo would later become Godard regulars and they are at their charismatic best here. Belmondo takes a step back and functions as a support, after being front and centre in Breathless. Karina, who received award recognition for her performance, is such an irresistible and photogenic beauty. Perky and energetic whenever she is on screen, she exudes a likeable charm. While often presenting a cheerful facade, her frustration towards Emile, her doubts about his love for her and her curious feelings toward Alfred, conflict with one another and her feelings of sadness and discontent are very evident. While this is Angela's love story, it also seems to be a document of Godard's love for Karina, who would shortly after become his wife.

I imagine her character's flaunted femininity and headstrong desires would have been inspirational and relatable to a lot of female viewers at the time of release. Her image (her hair-do and quirky clothing choices) can still be recognised as an influence today. She actually reminded me a little of Melanie Laurent's character in Beginners, who I think is clearly influenced by Godard's female characters. Karina here, and Chantel Goya in Masculine Feminine too.

Following Breathless, Godard has now turned his attention to the musical comedy, crafting a lively, sweet tale that experiments with colour, visual style and non-diegetic sound. Using a mixture of sets and actual Parisian streets - Godard himself has called A Woman is A Woman an 'neorealist musical' - he has crafted a digestible charmer that made a star of Anna Karina and occupies an important niche in French New Wave cinema. Up next: My Life to Live.
Posted by Andy Buckle at 4:33 PM