In this 2011 update of Alexander Dumas’ classic tale, Paul W. S Anderson (responsible for the Resident Evil series, Alien vs. Predator and Death Race) is the man at the helm. He brings his muse (well, his wife apparently), Milla Jovovich, back again for this overblown 3D action adventure that is as abysmal as anything I have seen this year. 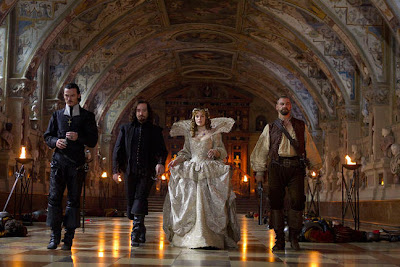 This messy, convoluted script isn’t even worth delving into. But all you need to know is that the three legendary rouge musketeers, Athos (Matthew Macfayden), Porthos (Ray Stevenson) and Aramis (Luke Evans) are joined by a hotheaded upstart named D’Artagnan (Logan Lerman), who has ridden into Paris seeking to make a name for himself. Instead he picks fights with Rochefort (Mads Mikkelsen), the leader of Cardinal Richelieu’s (Christoph Waltz) private guard, and each of the musketeers.

Having been betrayed by Milady de Winter (Jovovich) during a Venetian mission to steal Leonardo Da Vinci’s plans for an airship, the musketeers are unemployed and useless. But fueled by a desire to seize the French throne, Richelieu sets plans in motion to have France, ruled by King Louis XIII (Feddie Fox) go to war with England, ruled by the Duke of Buckingham (Orlando Bloom). In order to reclaim a stolen diamond necklace and halt the escalation into war, D’Artagnan and the musketeers are called to action, pitted against Milady and a ruthless Rochefort.

The Three Musketeers gets a tick for lavish production values and startling costuming (if ten too many jokes about clothes) because the film does look great. Scenes of the CGI air ships battling one another and then crash landing are quite impressive. There were plenty of laughs (maybe they were scoffs) from the audience at the overblown cheesiness of the latter. Some of the fight sequences were also a bit of fun. Unashamedly slapstick and cartoonish in quality, the unnecessary addition of 3D did make them somewhat nauseating, and if you think about it, they often result in nothing. Also, the film is never serious enough to warrant any feelings of tension, and in moments that are supposed to be emotionally involving, Paul W. S. Anderson resorts to slow motion stunts and conveniences. There are countless 3D gimmicks thrown in too, just to remind viewers they paid an extra four dollars. 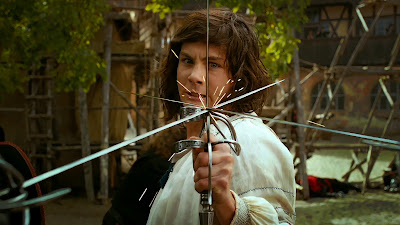 Matthew Macfayden (Death at a Funeral and Pride and Prejudice) is usually pretty solid, but he just looks bored here and spends the entire film pouting and dwelling on Milady’s early betrayal. Milla Jovovich bats her eyelashes at everyone, pulls objects out of her cleavage, double and triple crosses everyone and performs moves that her character in the Resident Evil films would be happy to pull off. Where has Orlando Bloom been? Not improving his acting, it seems. He is woeful as Lord Buckingham, as suave as he is camp, with forced, and poorly timed delivery. Speaking of camp, how bout Freddie Fox and his assortment of getups?

None of the other performers are memorable, if only for making me cringe when I recognized their involvement. Ray Stevenson (who was great in HBO’s Rome and has been awful in everything ever since), Christoph Waltz (playing another slimy villain - that makes it three times this year), Mads Mikkelsen (who many will know, having seen the early films of Nicholas Winding Refn, can actually act) and Til Schweiger (who did…something) are the most notable. Also preposterous is the fact that Macfayden, Stevenson and Evans are all speaking with British accents, while Logan Lerman continues to speak with his American one. 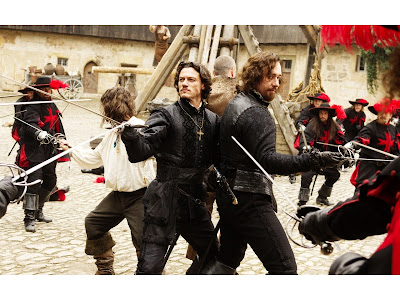 The writers know they have built something ridiculous. I mean, how could they not? But there is no obvious place to start when picking it apart. Could it be the ridiculously contrived manner that D’artagnan bands with the legendary musketeers? Could it be practically every exchange between King Louis XIII and Cardinal Richelieu? Could it be the fact that a violent, explosion-riddled assault on the Tower of London was commandeered with the knowledge that the prize – a diamond necklace that gets thrown around and incredibly survives shiny and in one piece – wasn’t even there? Could it be the fact that during an airborne hostage situation, D’Artagnan and the musketeers are given sixty seconds to come up with a plan before Rochefort calls “times up”? Seriously, it’s beyond outrageous.
Though the film is preposterous, though its cheap attempts at humour (James Cordon provides a couple of laughs as a portly servant) almost always fail, and though it is an insult to anyone who admires the work of Alexander Dumas, I can’t say I was bored. Sure, it seems to go on forever, and there is an opening for a sequel, but I still enjoyed myself more than in the most recent Pirates installment. This film literally becomes Pirates in the air anyway. The Three Musketeers also borders on being ‘so bad it’s fun’. This doesn’t warrant a better grade than equally mediocre films, but it’s just a minor compliment. There will be plenty of people seeking out easy holiday viewing - if it lasts that long – and they will be moderately entertained, I’m sure.
My Rating: ★ (D-)
Posted by Andy Buckle at 11:27 PM