Earle Brooks (Kevin Costner) is a successful philanthropist, a ‘Man-of-the-year’ and a loving family man in Bruce A. Evans' 2007 thriller, Mr Brooks. He is also a serial killer, or The Fingerprint Killer as the media have tagged him. He chooses his victims at random and leaves no clues. Having suppressed his psychological demons for two years, his addiction (and he even attends AA meetings to keep them at bay) to killing resurfaces through the aggressive inspiration of his vicious alter ego, Marshall (William Hurt), who fuels Brooks’ double-life. 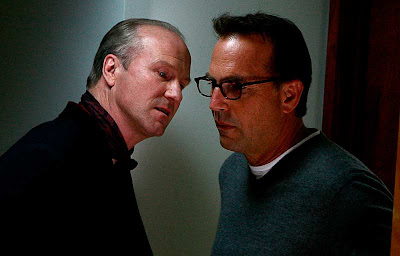 We get a quick insight into Brooks’ genius in his murder of a young couple and through his meticulous procedures - using a plastic bag to cover the gun, vacuuming the crime scene and destroying his clothing in a giant furnace in his study. Though he is out and about all night, his wife Emma (Marg Helgenberger) never suspects anything. But during the aforementioned killing he is spotted through the curtains (which were conveniently left open, despite the couple engaged in sex) and photographed. The witness, a slimy murder-addict played by Dane Cook, blackmails Brooks into agreeing to accept him as his protégé. They start to cruise the city looking for someone who seems ‘fun to kill’.

Not only is Detective Tracy Atwood (Demi Moore) on the hunt for the Fingerprint Killer, but she is also in the middle of an expensive divorce, which results in several stale, unnecessary sequences with Atwood accompanied by her attorneys in the process of settlement. In addition, she also finds herself vulnerable to another serial killer, known as The Hangman (seriously, who is thinking up these names), who has just been released from prison and has decided to seek his revenge on her for putting him away. Demi Moore is probably the worst choice for a hardboiled, world-weary detective. Not once is she convincing, and there is not just one, but two cliché subplots used to complicate matters and force us to care about her plight. It’s ludicrous. 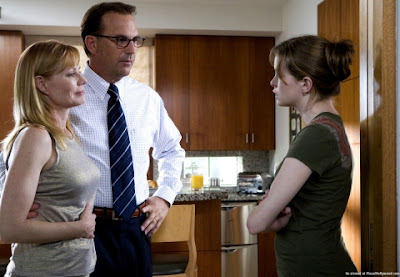 Then there is Brooks’ daughter, Jane (Danielle Panabaker), who has mysteriously returned from college. Marshall is convinced she is hiding something, when she openly admits to dropping out, expressing desire to ‘work’ for her father. Sure enough, she reveals to her mother that she is pregnant. This doesn’t appease Marshall and Earle, and when the FBI turn up on the Brooks’ doorstep and interrogate her about a recent murder in her dorm room, Earle fears that his daughter has inherited his sinister ‘problem’. This raises several complications, and is an interesting angle, though the film wraps it up way too quickly and it is largely ignored. If this all feels like a lot, it’s because it is.
Whenever the film strays into conventional and obvious waters (which is pretty often) there is some sort of contrivance to give it a spin. There is enough here to justify a television series, but one popular show airing right now dealing with a killing addiction already springs to mind. With this many plot threads, the film is at a disservice trying to squeeze them all into a concise running time. It doesn’t do a bad job – but there were several times when I was dumbfounded by disbelief, or lost interest in Atwood’s story. There are a few chilling sequences and some grisly violence, and the film makes effective use of the score. 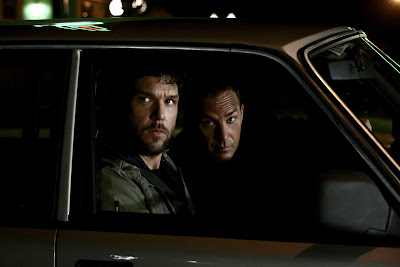 There is also a dark sense of humour prominent throughout – with a devilishly amusing Hurt rejoicing at Costner’s decision to take up killing once again and often egging him on from the back seat. The film is genuinely exciting whenever they are on-screen together. While the casting of the steely-eyed Hurt was perfect, Costner was a bit uneven (at times he was a cross between suave and menacing, and others emotionless and flat). Still, the film didn’t suffer because of him. Demi Moore (looking plain and incapable of infusing her character with any life) and Dane Cook (looking the part of a slimeball) were awfully miscast.
While the premise of Mr Brooks is intriguing and the Costner/Hurt double act is great work from both actors, the film is stuffed full of subplots and twists. Nothing is resolved in a believable way, plot holes are conveniently overcome and it all becomes increasingly implausible. It was disappointing, but Evans and Gideon's effort is commendable for trying to shake things up.
My Rating: ★★★ (C+)
Posted by Andy Buckle at 9:26 AM