Cronenberg has proven successful in the past, and I refer to Videodrome here, when he has examined how humanity has gradually become seduced by and immersed in escapist media and how they react and interact to the advancement of technology that surround them. Have we become tortured souls with the desire to suppress our own reality and live through another? In Videodrome, the influence of television programs is central to the plot and how we frequently desire to live in the reality of what we are watching, and absorbing reality (the example is a snuff film) through a medium. Cronenberg makes it frighteningly aware that we are consistently watching people on television watch television. It was a film ahead of its time. 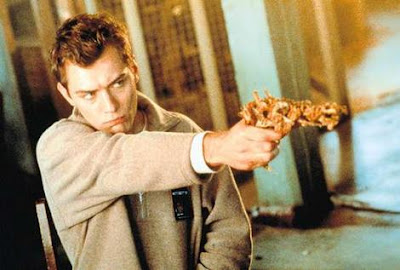 In the case of his 1999 Silver Bear winner, eXistenZ, the focus is on gaming. In the unspecified future existence the film adopts, gaming has advanced to a point where its creators have installed an interactive experience that can be shared (through a bio-port in the users’ bodies) and influenced by the individual desires of the gamers. Organic virtual reality game consoles known as “game pods” have replaced electronic ones, with this game world one that addicted gamers begin to prefer to their actual existence.
What The Matrix (also released in 1999) did was reveal that all humanity lived in a Matrix, an alternate reality controlled by a computer system, masking their reality, which they were oblivious to. Inception, more recently, established that shared dream states could become so elaborate that dreamers misinterpret their existence, unable to determine whether they are sleeping or awake. Similar premises fuel the surreal action in Cronenberg’s tense science fiction thriller.

In eXistenZ, two game companies, Antenna Research and Cortical Systematics, compete against one another. They are each threatened by a group of ‘Realists’ who are intent on preventing the deforming of reality. Antenna Research’s Allegra Geller (Jennifer Jason Leigh), the greatest game designer in the world, is testing her latest virtual reality game, eXistenZ, with a focus group at a seminar. She is shot in the shoulder by an assassin with an organic pistol – one undetected by the security guard (and marketing trainee), Ted Pikul (Jude Law), at the entrance. Law rushes to Geller and escorts her to safety. 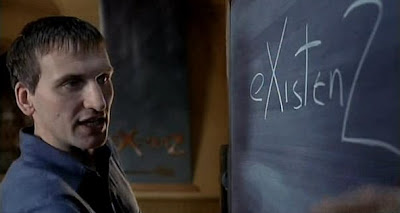 In order to repair her pod, which contains the only copy of eXistenZ and was damaged during the assassination attempt, Allegra claims that she must check the status of the game by playing in tandem with someone she can trust. She convinces Ted (who has a phobia about surgical penetration) to have a bio-port installed. They meet a black marketer named Gas (Willem Dafoe), who runs a gas station and he completes the procedure – but not before turning on the pair and threatening to kill Allegra for the bounty placed on her head. Pikul shoots the man, and the pair lay low in the ski lodge of Allegra’s mentor, Kiri Vinokur (Ian Holm), where they eventually enter the game. Now, this is where things get really interesting.

The film is initially pretty confusing, throwing the viewers straight into the world and offering little explanation. But through these odd encounters, and especially during the game, details about the way that the game masks reality (Ted finds it difficult to tell whether his actions inside the game are his own intentions or the game’s) and how we react to the gaming experience is slowly revealed. As a result of the quick start, there is lots of exposition thrown in to allow Ted to understand the gaming world (and us too) and why the Realists want Allegra dead. 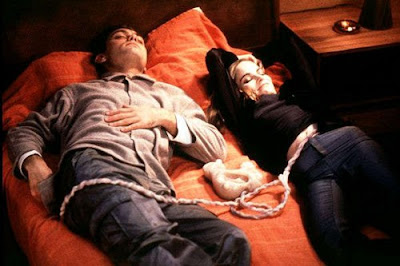 Ted has never played a game before, so it’s interesting to watch him and Allegra decipher how to move through the game. I’m not going to ruin any of what transpires during the game, which commences from about the 30-minute mark, because it is a disservice to a fresh viewer, but it is pretty surreal. They become workers at a game pod factory, where they meet a man named Yevgeny Nourish (Don McKellar), and eventually Ted builds a weapon out of the bones taken from his meal (such a great scene). eXistenZ is bizarre, multilayered, and often grotesque.
Much like in Naked Lunch, the world of the game is given this grimy appearance, which is accentuated by some clever lighting compositions and naturalistic exterior camerawork. It is meant to appear different to what we originally perceived as reality (the seminar, and the gas station). The film is a little slow to set-up but once it kicks into gear - entering the game - it is full of interesting ideas and like most Cronenberg, is a pretty wild ride. The film’s final 10 minutes, which adds surprising twists, are even more bizarre. I’m not going to pretend to know what it all meant, but I respect Cronenberg for his original and bold vision. The man sure knows a lot about contemporary media. 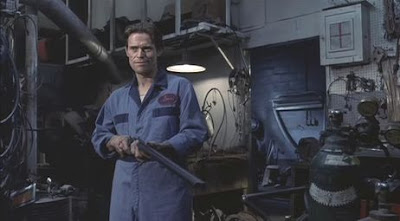 All of the tech work is great – from the gory visual effects to Howard Shore’s score. With the exception of Jude Law and Jennifer Jason Leigh, who are great, the film is comprised mostly of odd cameos – with the characters speaking in cliché ‘game dialogue’ for the most part, but enjoying playing with accents and being over-the-top.

When I worked through Cronenberg earlier in the year, this was one of his films I didn’t see. I don’t know why. I regret it now. While I don’t think it stands amongst his best films – Videodrome, The Fly, Crash and more recently A History of Violence – this is still intelligent and highly original filmmaking. I’m sure there are many out there who prefer eXistenZ to The Matrix. In some ways, I do too. Also, viewers familiar with eXistenZ, would have recognized the similarities in Inception.