2012 Motifs in Cinema: Inevitability of Death

With thanks to Andrew at Encore’s World of Film and Television I was asked to participate in Motifs of Cinema.


Motifs in Cinema is a discourse across 22 film blogs, assessing the way in which various thematic elements have been used in the 2012 cinematic landscape. How does a common theme vary in use from a comedy to a drama? Are filmmakers working from a similar canvas when they assess the issue of death or the dynamics of revenge? Like most things, a film begins with an idea - Motifs in Cinema assesses how the use of a common theme across various films changes when utilised by different artists.

In 2012 the motif of the ‘Inevitability of Death’ has been utilized in a diversity of ways. The following discussions of Oslo August 31st, The Grey, Looper, The Cabin in the Woods and Amour do contain specific details of the plot (spoilers).

Early on in Joachim Trier’s Oslo, August 31st, the central character, Anders, a former drug addict who has been allowed a day of leave from his rehabilitation facility, attempts to end his life. We, alone, witness this. We see him load his pockets with rocks and jump into a lake. A period of time later he explodes through the surface of the water, coughing and spluttering. Could he not go through with it? Perhaps, having considered taking his life for some time, he wanted to see if he ‘could’ when the time came? We follow Anders through Oslo for the remainder of the film, aware of what the other characters he meets – old friends who he reunites with, and in some instances confronts - are not. To them, he seems to have recovered and doing well. We are unsure, but we get an unsettling sense that this could potentially be Anders’ final day on earth. By personal design. There are empathetic moments where we understand Anders’ reaction to simple pleasures purely through his facial expressions, almost as if he knows this is the last time he will feel this sensation. Trier has some surprises in stall, because the day’s trajection isn’t a self-destructive spiral (as it could have been, and usually is for these sorts of films), but actually presents an optimistic future. But, there is still that undeniable feeling of inevitability in the atmosphere of this magnificent film that unnerves us as we accompany Anders through the day. 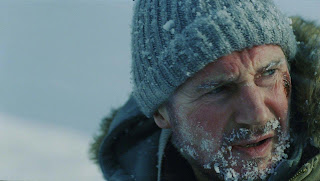 In Joe Carnahan’s The Grey, a team of oil workers find themselves stranded in Alaska after their plane crashes. Not only must they endure the harsh elements, but they soon learn they are being hunted by a pack of wolves. As they are taken down one-by-one the remaining survivors try in vain to find suitable shelter and/or help. They share stories about their lives and question the existence of God (willing him to show himself in lieu of their crisis). There are telling moments in this film where the characters are facing certain death and are aware of it. They initially believe they are lucky to have survived the crash, but their hope begins to fade. We know their fate, but the journey there is thrilling and philosophically enlightening.

No character is more compelling than Diaz (Frank Grillo), who is a tough guy that opposes the natural leadership of Liam Neeson’s character. He is as scared as anyone, but hides it by being antagonistic. He desires nothing else but to survive. That is until he finds himself starving and wounded. The fight is completely drained from him. He is in the most beautiful location he has ever experienced, and the way he sees it, the future offers nothing more perfect. As he puts it, he’s done. Another character, scared of heights and crossing a precipice, is struck by fear and realizes he will never be able to conjure the strength to make it across. A close-up of his anguish reveals he has also accepted his fate. What makes The Grey more than the average survival film is this battle between life and death. The men try and maintain hope by sharing stories and collecting the wallets of their fallen friends, but deep down they know they aren’t going to make it. We know too, but still it impacts. 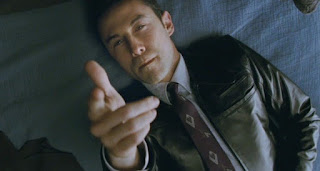 In Rian Johnson’s Looper Joe (Joseph Gordon-Levitt) is a Looper, a hired hit man who disposes of criminals sent back in time. An inevitable passage of his profession is the necessary ‘closing of his loop’ - the killing of himself, transported back from thirty years in the future at a time when time travel exists. This entitles him that period to retire, survive off the compensation provided and wait for the day when his life is summoned to end. Every Looper is aware of this, but as the story unfolds, there are surprising agendas that draw together both Joe’s present and let-free future self (Bruce Willis), which have the potential to bend time and change the course of the future. While Joe’s middle-aged death is inevitable, he is faced with a rare opportunity to affect and change the lives of a number of people along the way – and one of the film’s themes pits taking an easy route (death), or letting love alter the future. As we learn, in the film’s spiral of time, nothing is inevitable. 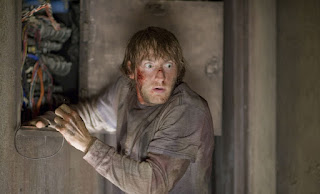 In Drew Goddard’s The Cabin in the Woods the film’s whole premise toys with horror film conventions. When we are watching a teen slasher film we have come to expect to see the characters gradually killed off – the promiscuous blonde is usually the first to die, the quiet innocent one the last target – and screenwriter Joss Whedon is very aware of this. In Cabin their demise is an essential catalyst to a ritual. The holidaying youngsters are oblivious to this ritual, or the elaborate manipulations put in place to ensure their demise over the course of the night. One character, essentially the audience member predicting what will come next, finds himself in-tune with such conventions. He realizes what is happening and is one step ahead of the puppet masters. Whedon takes it one step further, prompting the characters unlikely involvement in their own deaths. The audience knows of their inevitable deaths, because they recognize this is a deconstruction of a genre, but most of the characters remain oblivious. Their demise is a source of entertainment, which is a completely different agenda to the rest. 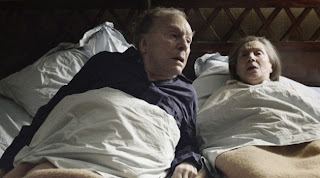 In Amour Michael Haneke looks at an elderly couple, whose young lives have not been placed in danger unexpectedly or their premature death threatened in any way. Natural aging tests their love. Every human on earth is aware they are going to die, and as one gets older the day draws nearer. Anne (Emmanuelle Riva) suffers a pair of debilitating strokes, the second of which leaves her hopelessly bedridden. She further deteriorates; despite her husband Georges (Jean-Louis Trintignant) trying everything he can to help her. Here Haneke deals with death as a celebration of love; revealing through their interactions (Georges’ tenderness and evident frustration, Ann’s uncontrolled difficulty) how extraordinary their lives together have been and how strong their bond is after all of this time. It is a beautiful, personal and deeply affecting study of humanity at its most fragile, embracing life (and the will to live) even when death seems inevitable and close.


In the films examined, which include there is a very interesting dichotomy between the character’s conscious sense of living and their pending deaths. Some characters are aware of the likelihood of their approaching death (Amour, The Grey). Some, even, are sure of it (Oslo, Looper). For the characters in Cabin in the Woods, there is no inital recognition of such inevitability, but they come to realize what we know throughout the course of the film, as events turn against them.

I no doubt have missed a few films that deal with the motif of 'The Inevitability of Death'. What other films come to mind?

Here is a link to Andrew's and all of the other bloggers' contributions.