In the House is screening as part of the 2013 Alliance Francaise French Film Festival.

In the House is the new film from esteemed French writer-director Francois Ozon (Swimming Pool, Potiche) adapted from ‘The Boy in the Last Row’ by Juan Mayorga. It is a dual character study of a world-weary teacher and failed novelist, and a gifted, but evidently troubled pupil who displays exceptional writing talent. It is an unsettling drama that leaves plenty to ponder, and deals with voyeurism, professional misconduct, the blurring of reality and fiction, and the conscious manipulation of the family dynamic. 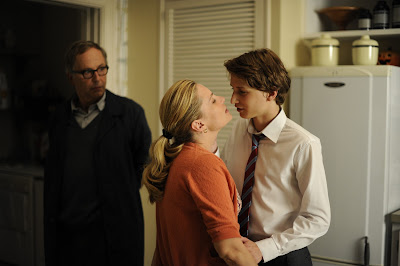 Germaine (Fabrice Luchini) is a frustrated old-fashioned English literature teacher who has all-but given up hope for the new generation when he expresses his dismay to his art-curator wife, Jeanne (Kristin Scott Thomas), at his students’ recent inept efforts. Only one pupil from his class, Claude (Ernst Umhauer), turns in anything proficient on a writing assignment. Intrigued by the boy’s interesting, but somewhat inappropriate account of his weekend (which ends with a ‘to be continued…’), he questions whether it is a recount of the truth, or if it has been influenced by his imagination. This mystery remains throughout the film as we only ever see the events unfold as Luchini is reading them out.

Germaine takes an unnervingly voyeuristic interest in the boy’s follow-up essays. We learn that Claude has befriended a classmate Rapha (Bastien Ughetto). Offering to help him with his mathematics, he manages to ‘infiltrate’ the house of what he declares to be the perfect middle class family. Soon enough Rapha’s parents (a jovial Denis Menochet and a suffocated Emmanuelle Seigner) begin to treat him like a second son. Over time his actions and intentions become more sinister, and Germaine, hooked on the story, begins to play a role in manipulating events (even procuring a test in advance to help Rapha pass math) to ensure that Claude continues to be invited into the house, and with means to elaborate on his tale.


Continue Reading at Graffiti With Punctuation.
Posted by Andy Buckle at 9:55 AM