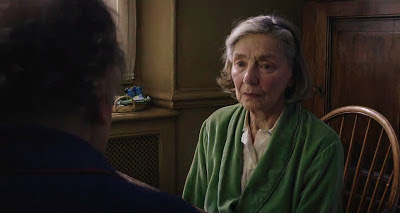 Amour follows Georges (Jean-Louis Trintignant, The Conformist, Trois Couleurs: Rouge) and Anne (Emmanuelle Riva, Trois Couleurs: Bleu), retired music teachers in their 80's with a daughter, Eva (Isabelle Huppert, The Piano Teacher), who lives abroad with her family. The couple's eternal love is severely tested when Anne suffers a debilitating stroke at the breakfast table one morning after attending a piano recital of one of Anne's former students in Paris. The stroke, which paralyses the right side of her body, leaves her house-bound and completely reliant on the care and continued devotion of her husband. As Anne begins to slowly deteriorate, the result of a second stroke, both her immense suffering and the tremendous stress and heartbreak this causes Georges is more-than-effectively conveyed to an audience that can only watch in both awe at the craftsmanship on display and despair at what we are literally being forced to watch. Haneke masterfully crafts an tender, honest, exhausting and emotionally devastating portrait of the strength of human devotion, delving into the fears that everybody has about old age, whether it is suffering like Anne does, or watching a loved one suffer and being unable to help them.

The Last Stand - After leaving his LAPD narcotics post following a bungled operation that left him wracked with remorse and regret, Sheriff Ray Owens (Schwarzenegger) moved out of Los Angeles and settled into a life fighting what little crime takes place in sleepy border town Sommerton Junction. But that peaceful existence is shattered when Gabriel Cortez (Eduardo Noriega), the most notorious, wanted drug kingpin in the western hemisphere, makes a deadly yet spectacular escape from an FBI prisoner convoy.

Beautiful Creatures - A supernatural love story set in the South, "Beautiful Creatures" tells the tale of two star-crossed lovers: Ethan (Alden Ehrenreich), a young man longing to escape his small town, and Lena (Alice Englert), a mysterious new girl. Together, they uncover dark secrets about their respective families, their history and their town.

Playing For Keeps - Gerard Butler, Jessica Biel, Uma Thurman, Catherine Zeta-Jones and Dennis Quaid star in Playing for Keeps, a romantic comedy about a charming, down-on-his luck former soccer star (Butler) who returns home to put his life back together. Looking for a way to rebuild his relationship with his son, he gets roped into coaching the boy's soccer team. But his attempts to finally become an "adult" are met with hilarious challenges from the attractive "soccer moms" who pursue him at every turn.

The Collection - When Elena's (Emma Fitzpatrick) friends take her to a secret party at an undisclosed location, she never imagined she would become the latest victim of The Collector, a psychopathic killer. The Collector kidnaps and transports her to an abandoned hotel he's transformed into his own private maze of torture and death. Upon learning of his daughter's disappearance, Elena's wealthy father (Christopher McDonald) hires a group of mercenaries to retrieve her from the vicious grips of The Collector. These mercenaries coerce Arkin (Josh Stewart), the only man to have escaped the wrath of this heinous monster, to lead them through the gruesome labyrinth. Now, Arkin finds himself fighting for his own life in order to save Elena.

Cirque Du Soleil: World's Away 3D - From the big top to the big screen, visionary filmmaker James Cameron and director Andrew Adamson (Shrek, Narnia) invite you and your family on an all new 3D adventure: Cirque du Soleil Worlds Away. A young couple who is separated, must journey through the astonishing and dreamlike worlds of Cirque du Soleil to find each other, as audiences experience the immersive 3D technology that will allow them to leap, soar, swim, and dance with the performers. This Holiday Season, Cirque du Soleil brings their world to your city!


Weekly Recommendation: Amour, nominated for five Academy Awards including Best Picture, Best Director and Best Lead Actress, is the only film this week I have seen this week. It is a gruelling but beautiful portrait of what love truly means and features some remarkable sequences that evoke shock, fear, despair, sincerity, immense sadness and even some joy. The performances are extraordinary. Though this is the week with the most releases so far this year, little else is of interest here.
Posted by Andy Buckle at 9:49 AM