I Give It A Year hits cinemas February 28.

Dan Mazer (the writer of Borat and Bruno) makes his directorial debut with a bawdy and irreverent romantic comedy, I Give It A Year, packing this sharply observant insight into the realities of a young marriage with plenty of hilariously awkward sketches. The characters are likable, with Rafe Spall’s bumbling klutz the most idiotic but endearing of them all, the writing is genuinely funny and Mazer even attempts to subvert the genre while aware of adhering to the most obnoxious of tropes. 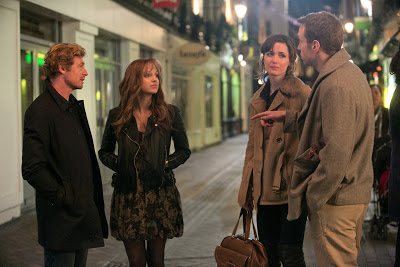 Sparks fly between Nat (Rose Byrne), an ambitious PR, and Josh (Spall), a housebound novelist working on his sophomore piece, after meeting at a party. Much to the shock of their family and friends, who have already spotted the mismatch, they are married within the year. Everyone fears the worst, questioning whether they will survive their differences and make it through the notoriously tumultuous first year of married life. Suffering from writer’s block and cabin fever, Josh reunites with ex-girlfriend Chloe (Anna Faris), who left their relationship for a multi-year international humanitarian  venture, and Nat finds herself removing her wedding ring for the purposes of flirting with a handsome, high-profile American client, Guy (Simon Baker), only to find reciprocated fascination. These attractive alternatives result in the couple’s trials and tribulations, forcing them to consider the life-changing decision.


Continue reading at Graffiti With Punctuation.
Posted by Andy Buckle at 10:25 AM