Another Woman’s Life is screening as part of the 2013 Alliance Francaise French Film Festival.

Another Woman’s Life, the directorial debut from Sylvie Testud (also an actress and successful author)is a somewhat erratic time-warp comedy/drama adapted from the novel by Frederique Deghelt. Driven by an interesting premise and a committed and energetic performance from audience favourite Juliette Binoche (Trois Couleurs: Bleu, Chocolat), Testud’s film overcomes some clumsy and forced execution, to be moderately charming. 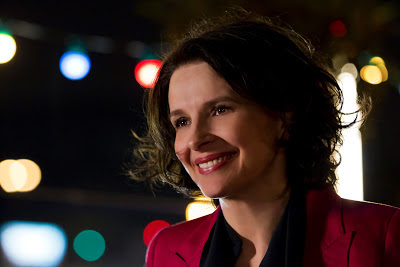 The film’s prologue introduces us to Marie (Binoche), an ambitious twentysomething who applies for an entry-level job at the high finance corporation of Dimitri Speranski (Vernon Dobtcheff). On the night of her 26th birthday, Marie sleeps with Speranski’ cartoonist son, Paul (Mathieu Kassovitz, Amelie), whom she has recently fallen in love with. When she awakes the next morning she is surprised to find herself in a lavish Parisian home situated at the base of the Eiffel Tower. She is equally shocked to learn that she is now in her early 40’s, and has slept through and forgotten the last fifteen years of her life.


Continue Reading at Graffiti With Punctuation.
Posted by Andy Buckle at 8:11 AM