Barbara is released in cinemas March 7 through Madman Films.

Christian Petzold’s Barbara is an elegantly photographed, but fidgety-paced character drama. As an undercurrent of East/West tension ripples below  the surface Petzold’s understated direction creates a suffocating atmosphere influenced by conflicting emotion, and impressive performances from Nina Hoss and Ronald Zehrfield. Barbara is a film that moves slow and requires attentiveness. The payoff, which is admittedly moving, doesn’t quite reward the particular build-up. 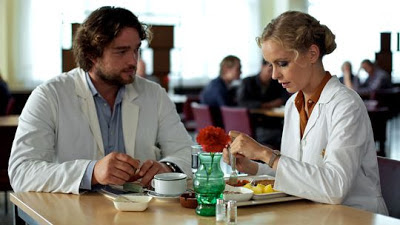 Set in East Germany, Barbara tells the story of a doctor (Hoss, Yella) who has been exiled from Berlin to a country hospital after requesting an exit visa. As she warily acquaints herself with her new apartment and colleagues – including her friendly boss Andre (Zehrfield, In the Face of the Crime) – Barbara is secretly plotting her escape with her West lover, Jorg (Mark Waschke). Unannounced visits by the Stasi, who thoroughly conduct shakedowns of her apartment and person for contraband, keep Barbara on edge, and result in her being standoffish and suspicious of her colleagues. Barbara reveals her skills as a pediatric surgeon, showing compassion towards her young patients. Barbara morphs into a thriller of sorts, clouding Andre’s motivations for extending such kindness and sensitivity, and having found unexpected responsibility and purpose, Barbara’s specific agenda.


Continue reading at Graffiti With Punctuation.
Posted by Andy Buckle at 8:55 AM