Of course, I am late again. Originally, I had intended to watch and write about Luis Bunuel's The Discreet Charm of the Bourgeoisie as March's blind spot film, but I have since found it impossible to discuss following my experience with it. I like Viridiana and some of Bunuel's other films, but I just wasn't on the wavelength of this social satire/comedy of manners. Surreal and intermittently very funny, but I just never got immersed. 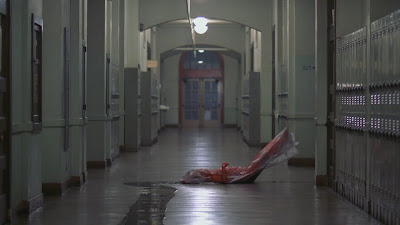 The horror genre is all about consciously watching your nightmares unfold on screen, and A Nightmare on Elm Street is a brilliant example of how cinema can toy with our perceptions of interlocking dream and reality. It is a very creepy film, and Craven has utilised every trick in his book - an iconic villain, some effective make up and effects and a chilling score - to create one of the finest entries in the teen slasher genre. It is a film sure to have kept many viewers up all night fretting about falling asleep.

There are some nightmare sequences here that commence seamlessly following our perception of the character's last conscious state and we can never be sure whether what we are watching is taking place inside the characters' heads. A great example is Nancy falling asleep while in class. Entering the hall, having seen the now-dead Tina, Nancy follows a bloody body bag containing Tina's corpse that is being dragged by an invisible figure through the school halls. From what we have already seen, anything is possible. When Nancy enlists her boyfriend to sit by her bed and make sure she doesn't fall asleep while she tries to communicate with the imprisoned Rod, we 'believe' we are watching exactly what she does.

The film also tackles small town civil justice and the repercussions of taking the life of an individual. The death of Freddy Krueger, despite his horrific crimes, stained the soul of everyone involved. They will never forget what they did and their children, innocent of any involvement, are forced to face the wrath of Freddy's revenge. There are countless classic moments - Freddy's long-limbed introduction, the bathtub scene, the death of Johnny Depp (in his first screen role) - with Craven doing a great job ensuring the suspense never lets up.

For me, A Nightmare on Elm Street is Craven's masterwork so far. But only Scream (1996) has come close, really. There is relentless intensity and commendably, a perceptive heroine at centre of the narrative. We believe we will be following one character for a while, but the focus shifts. Nancy begins to understand that her meetings with Freddy only take place when she falls asleep, and she does all she can to keep herself awake. She has brought back items and injuries from her altercations, so she prepares herself, building weapons and setting traps in her home, in the hopes of luring Freddy into the real world.

Dream Warriors grows increasingly silly but it is an effective sequel that incorporates more characters and gives the film a fresh feel by shifting the setting from a suburban neighbourhood to a psychiatric hospital. The core group of characters have all experienced similar nightmares, and survived suicide attempts as a result. Here the nightmares are personalised, allowing Russell to build some inventive dream scapes and the character's to possess unique in-dream abilities. It also utilises the idea of shared dreaming, which allows the remaining characters to work together inside a shared dream, rather than be helpless inside their individual nightmares. It is certainly not as effective as Craven's film, but there is a sense of humour which works well and it is an enjoyable extension of the story. It would have made quite a clever closing film, but alas the series continued.

I have been recommended skipping the next few films and tackling New Nightmare. Thoughts?
Posted by Andy Buckle at 5:45 PM