Review: Cinema Jenin: The Story of A Dream (Marcus Vetter, 2012)

Cinema Jenin is an enlightening documentary account of a tightrope evasion of political, cultural and economic obstacles to resurrect a decrepit Palestinian cinema. The former Jenin West Bank cultural centre isn’t just a symbol of cinema, but the arts of a nation who has been without the privilege for over twenty years. Prior to the project there had been no functioning cinemas in Jenin since 1987, following First Intifada closure. A German journalist and documentarian fronts a passionate team who collectively envision its return to former glory. Navigating the divisive politically charged interests of a nation still in turmoil with it’s neighbour, Marcus’s dream is a dangerous but endearing one. This illuminating study of an important international aid project is powerful viewing, a tribute to the inspiring and healing magic of art and culture, and sought insurance that the arts are an integral part of universal societies. 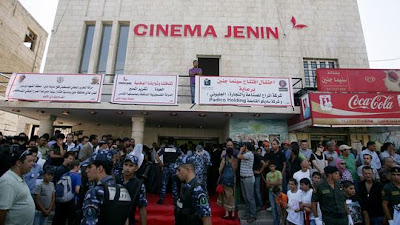 Marcus Vetter was in Jenin in 2008 after filming for his documentary Heart of Jenin, the story of Ahmed Khatib, a Palestinian boy shot by Israeli soldiers whose father decides to donate his son’s organs to Israeli children as a gesture of peace, when he learned about the abandoned cinema. Driven to resurrect, restore and reopen the iconic centre of Palestinian cultural life, he enlists a program director, begins to communicate with the cinema owners, and seeks funding learning some lessons on Palestinian customs along the way.


Continue reading at Graffiti With Punctuation.
Posted by Andy Buckle at 12:20 PM