Director Joseph Kosinski (Tron: Legacy), who co-adapted the screenplay with William Monahan (The Departed), Karl Gajdusek and Michael Arndt (Little Miss Sunshine) from his own unpublished graphic novel, has created an atmospheric and impeccably designed, if evidently derivative, sci-fi that effectively immerses a viewer in it’s fascinating world. Oblivion intrigues and surprises, on an emotional and stylistic level. 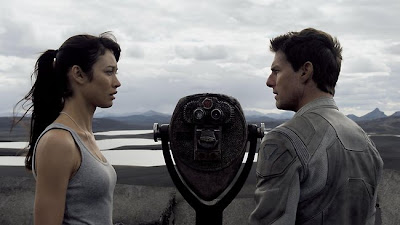 Following a war between humanity and an invading alien race sixty years earlier that has left Earth a ravaged wasteland, mankind is in the process of starting a colony on Saturn’s largest moons. Currently orbiting the Earth in an enormous space shelter, they have stationed on the surface Jack Harper (Tom Cruise), a mechanic who monitors and repairs patrolling drones and supervises the machines mining for the planet’s natural resources. When a spaceship unexpectedly crashes, Jack’s bond with one of the human survivors (Olga Kurylenko), a woman he recognises from a recurring dream, influences his understanding about the world he inhabits, leading him to discover the truth about humanity and his unlikely role in its future.


Continue reading at Graffiti With Punctuation.
Posted by Andy Buckle at 8:44 AM