I watched First Position at last year's Melbourne International Film Festival. This is an extension of my thoughts from there. First Position, distributed through Hopscotch, hits cinemas April 11.

This inspiring, crowd-pleasing and cleverly conceived documentary is a tribute to passion and commitment, the strict devotion to realising one's dreams. First Position, directed by Bess Kargman, chronicles six youngsters of different ages as they strain their bodies to the limit in competition for a spot in the final of the Youth America Grand Prix. We are privileged to the dramatic back stories of several young ballet dancers - Aran Bell (a prodigy living with his military family in Italy), Michaela DePrince (an orphaned girl from Sierra Leone who has been adopted by a Philadelphia family), Jules and Miko Fogarty, Joan Sebastian Zamora and Rebecca Housekneckt - and given insight into their upbringing and daily childhood lives (home schooling for example, which allows more time for dancing), their rigorous training, their backstage preparations and their emotions immediately after performing. We are given privileged access to each dancer, so we invested in the drama of their 'one-shot' performances. 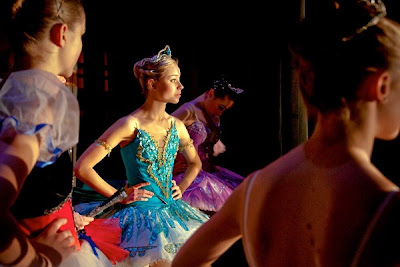 We understand the sacrifices these talented youngsters have made, are moved by their courage to overcome self-doubt, disappointment and even serious injury and credit their body-abusing hard work and determination. First Position is an engrossing, heartwarming documentary and like all great non-fiction films, transcends the subject matter. It culminates in a familiar final showdown - the Grand Prix - with all of the children arriving on the big stage. The stakes are high, and the panel of judges - representatives of major dance companies and academies - could offer them a career path. I was nearly brought to tears in the end by these compelling young stories in all of their intensity and grace.