In cinemas this week we have Olympus Has Fallen, The Company You Keep, No, The Other Son and Chasing Ice. 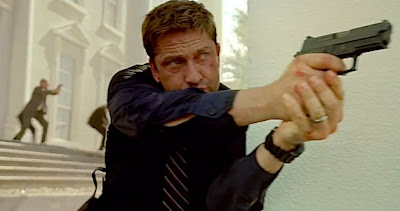 Olympus Has Fallen - When the White House (Secret Service Code: "Olympus") is captured by a terrorist mastermind and the President is kidnapped, disgraced former Presidential guard Mike Banning finds himself trapped within the building. As our national security team scrambles to respond, they are forced to rely on Banning's inside knowledge to help retake the White House, save the President and avert an even bigger crisis. Antoine Fuqua (Training Day) directs an all-star cast featuring Gerard Butler, Aaron Eckhart, Morgan Freeman, Angela Bassett, Melissa Leo, Ashley Judd and Rick Yune.

The Company You Keep - A wanted man and former member of the revolutionary militant group, Weather Underground, goes on the run after a journalist (Shia LaBeouf) outs him in this political thriller based on Neil Gordon's novel. Robert Redford stars and directs.

No - In 1988, Chilean military dictator Augusto Pinochet, due to international pressure, is forced to call a plebiscite on his presidency. The country will vote YES or NO to Pinochet extending his rule for another eight years. Opposition leaders for the NO persuade a brash young advertising executive, Rene Saavedra (Gael Garcia Bernal), to spearhead their campaign. Against all odds, with scant resources and under scrutiny by the despot's minions, Saavedra and his team devise an audacious plan to win the election and set Chile free.

The Other Son -  A moving and provocative tale of two young men - one Israeli, the other Palestinian - who discover they were accidentally switched at birth, and the complex repercussions facing them and their respective families.

Chasing Ice - Acclaimed National Geographic photographer James Balog was once a skeptic about climate change. But through his Extreme Ice Survey, he discovers undeniable evidence of our changing planet. In Chasing Ice, Balog deploys revolutionary time-lapse cameras to capture a multi-year record of the world's changing glaciers. His hauntingly beautiful videos compress years into seconds and capture ancient mountains of ice in motion as they disappear at a breathtaking rate. Traveling with a team of young adventurers across the brutal Arctic, Balog risks his career and his well-being in pursuit of the biggest story facing humanity. As the debate polarizes America, and the intensity of natural disasters ramps up globally, Chasing Ice depicts a heroic photojournalist on a mission to deliver fragile hope to our carbon-powered planet.


My weekly recommendation is 'No'.
Posted by Andy Buckle at 4:17 PM