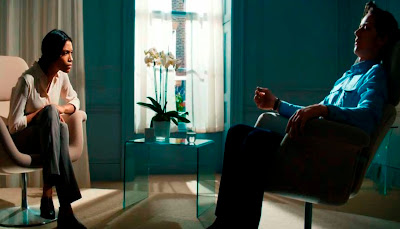 Jurassic Park - The film follows two dinosaur experts -- Dr. Alan Grant (Sam Neill) and Dr. Ellie Sattler Laura Dern) -- as they are invited by eccentric millionaire John Hammond (Richard Attenborough) to preview his new amusement park on an island off Costa Rica. By cloning DNA harvested from pre-historic insects, Hammond has been able to create living dinosaurs for his new Jurassic Park, an immense animal preserve housing real Brachiosaurs, Dilophosaurs, Triceratops, Velociraptors, and a Tyrannosaur Rex. Accompanied by cynical scientist Ian Malcolm (Jeff Goldblum), who is obsessed with chaos theory, and Hammond's two grandchildren (Ariana Richards and Joseph Mazzello), they are sent on a tour through Hammond's new resort in computer controlled touring cars. But as a tropical storm hits the island, knocking out the power supply, and an unscrupulous employee (Wayne Knight) sabotages the system so that he can smuggle dinosaur embryos out of the park, the dinosaurs start to rage out of control. Grant then has to bring Hammond's grandchildren back to safety as the group is pursued by the gigantic man-eating beasts.

Trance - Simon (James McAvoy), a fine art auctioneer, teams up with a criminal gang to steal a Goya painting worth millions of dollars, but after suffering a blow to the head during the heist he awakens to discover he has no memory of where he hid the painting. When physical threats and torture fail to produce answers, the gang's leader Frank (Vincent Cassel) hires hypnotherapist Elizabeth Lamb (Rosario Dawson) to delve into the darkest recesses of Simon's psyche. As Elizabeth begins to unravel Simon's broken subconscious, the lines between truth, suggestion, and deceit begin to blur.

Identity Thief - Unlimited funds have allowed Diana (McCarthy) to live it up on the outskirts of Miami, where the queen of retail buys whatever strikes her fancy. There's only one glitch: The ID she's using to finance these sprees reads "Sandy Bigelow Patterson"....and it belongs to an accounts rep (Bateman) who lives halfway across the U.S. With only one week to hunt down the con artist before his world implodes, the real Sandy Bigelow Patterson heads south to confront the woman with an all-access pass to his life. And as he attempts to bribe, coax and wrangle her the 2,000 miles to Denver, one easy target will discover just how tough it is to get your name back.

Sleepwalk With Me - "I'm going to tell you a story, and it's true....I always have to tell people that." So asserts comedian-turned-playwright-turned-filmmaker Mike Birbiglia directly to the viewer at the outset of his autobiographically inspired, fictional feature debut. Birbiglia wears his incisive wit on his sleeve while portraying a cinematic surrogate. We are thrust into the tale of a burgeoning stand-up comedian struggling with the stress of a stalled career, a stale relationship threatening to race out of his control, and the wild spurts of severe sleepwalking he is desperate to ignore. Based on the successful one-man show, Sleepwalk With Me engages in the kind of passionate and personal storytelling that transfigures intimate anguish into comic art.


Weekly Recommendation: Certainly a stronger week that recent times. Everyone has seen Jurassic Park, but how many people younger than me (25) saw it first on the big screen? I was five at the time and thinking back, I wonder what my parents were thinking. It is an at-times terrifying film, and the technical achievements are genius. I'm not sure whether the 3D addition is warranted, but I know that there are some films worth catching again on the big screen and Jurassic Park is one of them. Trance is not amongst Danny Boyle's best films - his resume is packed with gold, though - but my brain exploded trying to keep up with the film's twists and turns, and energetic pace. Brilliantly acted (especially McAvoy) and directed with no style to spare, this is also a recommended cinema experience. I have heard great things about Sleepwalk With Me (limited release at Dendy Newtown here in Sydney) - and check out Cam's review of the film (linked above) for positive endorsement.