Giveaway: Double Passes to 'No' (In Cinemas April 18)

No is a funny, behind-the-scenes period comedy/drama from Chilean director Pablo Larrain, revolving around the 1988 referendum on the Pinochet regime in Chile and the ad campaign wars that changed the route of the country. It was nominated for Best Foreign Language Film at the 2012 Academy Awards, representing Chile. 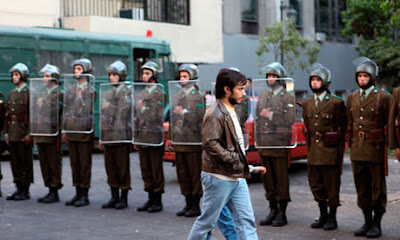 I caught the film at the Melbourne International Film Festival last year, and here were my brief thoughts following the screening:

"Having no knowledge of the politics, it did take me a little while to immerse myself in Larrain's interesting and provocative film, but when I did I found No, to be aesthetically inventive and often very funny. It won the top prize at the Director's Fortnight at this year's Cannes Film Festival. Gael Garcia Bernal, terrific as usual, plays a talented ad man hired to lead the creative team behind the NO campaign in the referendum to abolish/reinstate communism in Chile. A struggle soon ensures between his new colleagues over whether his vision (an upbeat tone similar to a coca-cola ad) will prove to be successful, and former colleagues, who view his new position as traitorous. Larrain chooses a very interesting look and the low-quality, home-video appearance (shot on period U-matic tape) and the square 4:3 ratio will initially throw some viewers, but it makes the blending of actual footage from the time, and these scripted sequences, all te more convincing. Its an unlikely story, and to think that the country's oppression was overthrown as a result of this professional struggle, is extraordinary. Tone and story shifts between being hilarious and dramatically and emotionally involving in surprisingly effortless ways, and this sophisticated work is worth celebrating."

Thanks to Rialto Distribution I have five double passes to No to give away. Entries close on Sunday 14th April at 11.00pm, with the film scheduled for release in cinemas April 18.

To enter, all you have to do is email your name and the name of one film staring Gael Garcia Bernal (not No) to andrew.buckle22@gmail.com with 'No Giveaway' as the subject. Restrictions may apply on use of the passes, but these will be clearly specified. Winners will be notified via email.

Please note: This giveaway is only valid for Australian residents for mailing purposes.
Posted by Andy Buckle at 3:45 PM