Between April 11-21 the 2013 Fantastic Planet: Sydney Horror, Sci-fi and Fantasy Film Festival will be under way at Dendy Newtown.

Tonight marked the opening night of the festival with All Superheroes Must Die with a Q and A with the writer/director and cast. 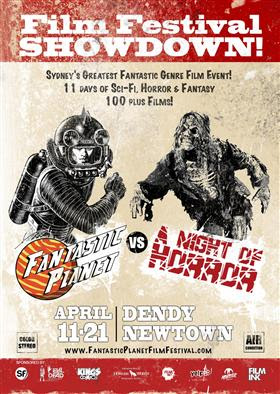 Other highlights of this year's festival include:

The Taking (World Premiere Sat. 15 April) - If David Lynch had written and directed The Texas Chainsaw Massacre it well could have resembled this feverish and stylised nightmare. A man and a woman both seeking vengeance, are drawn into the depths of a mysterious forest. Sadistic locals have far more horrifying plans for the two interlopers than just torturing the flesh of their bodies. A dark masterpiece that proves there are still original stories to be told in the horror genre, and masterful ways to tell them. Plus there is a Q and A with the film's writer/directors: The BAPartists (Cezil Reed and Lydelle Jackson).

Sinister (Australian Premiere Sun. 14 April) - The frightening new thriller from the producer of the Paranormal Activity films and the writer-director of The Exorcism of Emily Rose. Ethan Hawke plays a true crime novelist who discovers a box of mysterious, disturbing home movies that plunge his family into a nightmarish experience of supernatural horror.

Crawlspace (Sydney Premiere Fri. 19 April) - Enter the depths of the military base at Australia's own Area 51, in this action and twist-filled sci-fi/horror from the producer of Wolf Creek. Beneath the underground facility, elite soldiers encounter a mysterious survivor, the beautiful Eve. With Eve in two, the team must battle their way through escaped inhuman inmates and fight off the devastating psychic attacks rooted in their own darkest fears. Includes Q and A with director Justin Dix.

Grave (Australian Premiere Sat. 20 April) - Aiden (Josh Lawson) fantasises about taking the law into his own hands. His detective friend (Ron Pearlman) does little to dissuade Aiden's dreams of vigilantism, by agreeing that criminals should be killed. The only thing stopping Aiden's descent is the beautiful Virginia (Emma Lung). But the return of her boyfriend (Edward Furlong) pushes Aiden over the delusional line he has long straddled.

Click here to visit the website and for more info regarding the rest of the program, ticket prices and special events.
Posted by Andy Buckle at 11:13 PM