The Company You Keep is directed by Robert Redford (Quiz Show) and adapted by Lem Dobbs (The Limey) from the novel by Neil Gordon. Ben Shepard (Shia Labeouf), an upstart Albany reporter smells a big case following the arrest of Sharon Solarz (Sarandon), a member of Weather Underground, a radical left organization involved in the shooting death of a bank security guard in the 70’s. His probing leads him to a single-parent lawyer, Jim Grant (Robert Redford), who refuses to counsel the case and seems averse to questioning and speculation about his relationship to Solarz. When it becomes clear that Grant is not who he claims, and believed to be another long-time fugitive, the FBI, with Shepard in tow, pursue the resourceful Grant across the country as he seeks out accomplices to help him clear his name. 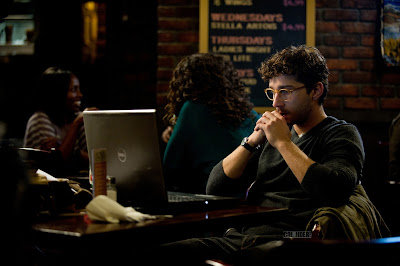 The humanist founder of the Sundance Film Festival and the motor-mouth kid from the Transformers films are at the core of this film. LaBeaouf is impressive here, talking at one hundred miles an hour and often scrounging for a pad and pen with a phone to his ear. He’s persistent and unpredictable, playing above his weight, but his genuine enthusiasm in the case and the individuals involved manages to convince his sources to cooperate. Redford proves he is still a presence in front of the camera, despite his recent lack of inventiveness as a director (as demonstrated by 2011’s The Conspirator).


Continue reading at Graffiti With Punctuation.
Posted by Andy Buckle at 8:47 AM