I first watched The Hunt at the Melbourne International Film Festival. Here is an extension of my diary thoughts. In cinemas May 2, distributed through Madman Films. 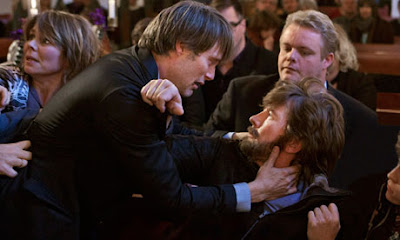 In Danish writer/director Thomas Vinterberg's haunting new drama, The Hunt, Mads Mikkelsen (awarded Best Actor at the Cannes Film Festival for the role), stars as Lucas, a popular small town Kindergarten teacher. When Klara (Annika Wedderkopp), the daughter of his best friend Theo (Thomas Bo Larsen), tells a story detailing inappropriate sexual contact from Lucas, it quickly becomes a serious case. The adults, informed of the claims by the school's principal despite there being no proof beyond Klara's account, are blinded by rage, turn against Lucas and begin a campaign to ensure that justice is served, targeting not only his professional career and personal reputation, but also his family. Lucas is wrongfully accused, but when more stories of abuse surface - a result of insular paranoia - the mounting lies spiral out of control to the point where the life of this innocent man is facing ruin.

The Hunt is tremendously affecting and frequently angered me. This is courtesy of the decision-making by some of the adult characters, and a line of questioning initially administered to Klara was especially deplorable. I left the cinema devastated. Vinterberg, best known for his Dogma 95 origin film, Festen [The Celebration] (1998), has crafted an atmospheric and tense drama of an insular community unnervingly embroiled in hysteria and turmoil as a result of a child's lie. A parent's desire to protect their children and bring justice to a wrongdoer in a situation like this is only natural, but the series of events in this story hit me hard. Vinterberg makes wonderful use of Mikkelsen's emotive face, drawing a mesmerising performance from one of Europe's most talented actors, in what is a glamorously photographed work.

There are many outstanding sequences - including a stunning finale - which punctuate why The Hunt is a must see, and many questionable decisions made by the school and the townsfolk, that will leave a viewer audibly frustrated. Lucas, so close to Klara's father he's like an extended member of the family, walks Klara to school alone on one occasion and on another assists a child in the lavatory. While these seem like kind and harmless gestures, without alternative adult supervision Lucas is susceptible to a situation like the one he is accused of. He has no witnesses, so it becomes the child's word against his.

While some of the actions might seem to be of an extreme nature, and the film deemed manipulative, I felt it was exceptionally well-constructed. Sadly, there are many cases of child sexual abuse in the world today. It is a horrific crime. This fascinating character study captures the emotions on both sides and asks us not to desire justice being served but to hope that in this case it isn't wrongfully done so.