The Artist, the red-hot Oscar favourite, the unexpected hit at the 2011 Cannes Film Festival, finally hits Australian cinemas this Thursday, distributed through Roadshow. Written and directed by Michel Hazanavicius, The Artist has not received glowing acclaim purely because it is unique and different; but because it is a delightful, beautifully crafted and technically proficient feel-good tale of the intertwining fates of two individuals during the silent/talkie transition period at the tail end of the 1920’s.

The Artist opens in the year 1927, with the charming, talented and exceptionally popular silent film star, George Valentin (Jean Dujardin) attending the premiere of his latest film, A Russian Affiair. Immediately, Hazanavicius is playfully toying with his audience by having Valentin’s character in A Russian Affair cry out under torture: “I won’t talk. I won’t say a word.” It is clever too, because it is not immediately apparent that this is actually a silent film because the accompanying score in these early scenes could realistically be coming from the orchestra scoring A Russian Affair. There are several other allusions to the film’s ‘silence’ throughout the narrative. 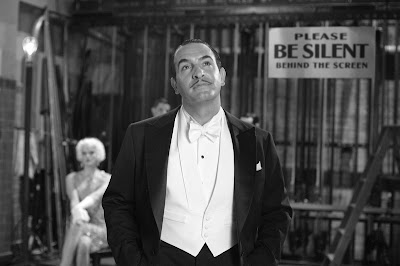 Incredibly proud of being a silent actor and of his grand achievements, Valentin, with his faithful canine in tow, entertains the crowd following the film, but it is outside the theatre, as Valentin is posing for photographs, that his life is forever changed. He is bumped into by one of his many admirers, a young woman named Peppy Miller (Berenice Bejo). Valentin reacts graciously, and Peppy embraces his good humour by posing alongside him in the photographs. They cross paths again later when Peppy, an aspiring actress, auditions to be an extra. Valentin insists that she be given a part in Kinograph Studio’s next production, much to the chagrin of the studio boss, Al Zimmer (John Goodman), concerned about this potential 'distraction' to his lead star. Following several romantic encounters with Valentin, accompanied by some friendly professional guidance, Peppy starts to earn more prominent starring roles.

Peppy’s successes do not reciprocate with Valentin though, as Zimmer announces the end of Kinograph Studio’s production of silent films. Dismissive, and convinced that American audiences have no interest in hearing his voice, Valentin decides to finance, write and direct his own silent film. Opening on the same day as Peppy Miller’s newest talkie (which proves to be a monumental hit), and coinciding with the 1929 stock-market crash, Valentin finds himself in financial ruin and a dissolute and forgotten star of the screen. His unhappy wife Doris (Penelope Ann Miller) kicks him out, and he is forced to auction off his personal effects. Though all seems to be lost for Valentin, Peppy never forgets about the man who helped her get her break, helping him in return and given him another chance to get his proud life back. 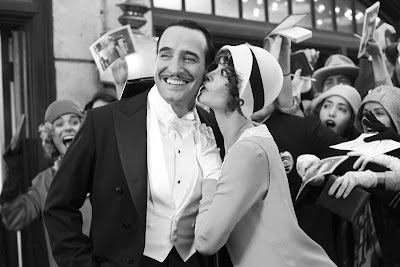 Hazanavicius is clearly a filmmaker with great respect and admiration for silent films and bygone eras, but it was not his intention to replicate the look of films from this pre-sound era. Having his actors use exaggerated theatrical gestures, incorporating some of those old transition techniques, and sparsely using the close-up would not have been a commercially accessible option. Yes, Hazanavicius has made a black-and-white silent film, even utilizing the old 4:3 square ratio, but with polished contemporary photography and editing techniques. Judged on a pure enjoyment level, The Artist is a miraculous achievement. There will be many people who will quickly disregard the film as a gimmick, or be too lazy to give a film that relies on inter-titles a go. The Artist's plot is easily comprehensible, and only uses inter-titles sparingly. This is a film brimming with charm, wit, grace, humour, nostalgia, tragedy and romance. Is it flawless? No. Should it win Best Picture? Though there were films I favoured more this year, there is more than enough cinematic magic here to leave me with absolutely no issues with the film taking out the top award.
What adds to the fun, though I feel ashamed to say that I haven’t seen a lot of the films that Hazanavicius pays homage too, is spotting the visual references, and in some cases, the influences on the score (the similarities to Vertigo have caused some controversy). Though I am yet to see Stanley Donen’s Singin’ in the Rain, the colleagues I saw the film with pointed out the heavy influence it had on Hazanavicius’ screenplay – while it is also hard to ignore the similarities to Sunset Blvd, with both Valentin and Gloria Swanson’s Norma Desmond finding their careers come to an end with the public desire for talkies. 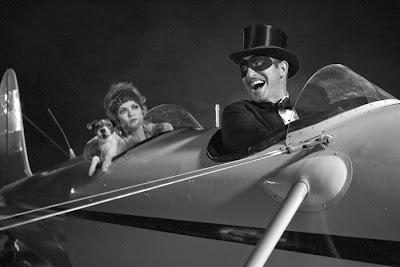 As expected for a silent film, the accompanying score is essential to its success, and Ludovic Bource has composed an excellent one, taking us through the 100-minute duration with stellar variation of composition. There is also some really clever use of sound (huh?). You’ll know when you see it. Hazanavicius’ direction is impeccable – working with his cinematographer Guillaume Schiffman to calibrate the lighting to convincingly capturing the black-and-white look of films from the era (more evident in Valentin’s films than The Artist overall). Despite the technical brilliance, the film’s magic rests with the actors, and thankfully, the frequent use of the close-up ensures they have every opportunity to shine.
Both Dujardin (who picked up Best Lead Actor at both Cannes and the Screen Actor’s Guild) and Bejo (Oscar nominated – Supporting Actress) deliver delightful performances, and bring infectious charisma and energy to their roles. The film offers some challenges to Dujardin, and he proves that his range is extraordinary, and his accolades have transformed this relative unknown into an International star. The central theme to this film is pride and as proud as he is of viewing himself as an ‘Artist’, his ability to charm the pants off his audiences, but also have this determination and firm belief in his abilities to entertain, will surely win over audiences. He uses his face (and especially his dazzling smile and his expressive eyebrows) to great effect. Bejo (stunningly gorgeous) impresses with the physicality of the role, constantly full of energy, and is successful in evoking her admiration for Valentin purely through her eyes. As both have worked with Hazanavicius on past projects (not to mention that Bejo is his wife), it is evident that they have built an exceptional chemistry together. John Goodman was excellent too. 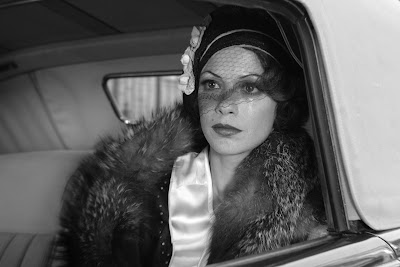 There really is so much to discuss with this film that trying to squeeze it all into a single review feels like an injustice on a lot of accounts. The themes are both subtly addressed (a simple shot of Peppy ascending a set of stairs, as Valentin descends - effectively capturing the direction of their careers) and less so (Valentin’s film captures him sinking into quicksand), but Hazanavicius does a great job relaying both story and theme entirely through his visuals.
With such a dominance of 3D technology prevalent in cinemas these days, Hazanavicius has taken on a very bold project here, magnificently crafting an accessible crowd-pleaser by utilizing old and culturally-extinct ideas – by stripping cinema not just of 3D technology, but also colour and sound. Importantly, it still has visual spectacle, but it also has likeable characters, and strong, if simple and not wholly original, storytelling. It all works, and I think it can be read as a subtle conquest of new technology. I actually think Hugo will be more effective in driving people to view more silent films, but to set this pleasurable tale in this historically significant crossroads era – and to honour this period through the chosen style itself – will no doubt spur people to consider bygone eras, and at least treat them with a bit more respect. 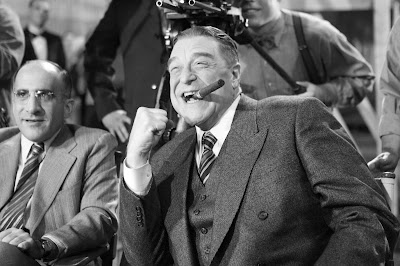 Still, under the weight of impossibly high expectations I could not help but be a little disappointed and I left the cinema with some criticisms – especially with the length and pacing. Also, the fact that Valentin’s revival didn’t actually come through his own personal evolvement, but ultimately through the repercussions of a chance encounter. This didn’t ignite the emotional resonance I expected. The Artist is also a little overlong, and sluggish in the middle. The melodramatic scenes, while affecting, were stretched a little too far and may even cause one to resent Valentin. Still, these minor flaws are easy to overlook because, like Midnight in Paris, Hugo and The Muppets, it succeeds effortlessly in invoking nostalgia and bringing a big smile to your face. For a well-crafted crowd-pleaser such as this, what more do you need? A cute dog, perhaps? Oh right, there's one of them too.
My Rating: ★★★★ (B+)
Posted by Andy Buckle at 4:21 PM