Hugo, nominated for several Golden Globe Awards and one of the Oscar frontrunners, is Martin Scorsese’s first foray into the world of 3D. It is a delightful family film, based on Brian Selznick’s novel The Invention of Hugo Cabret, adapted by John Logan (Rango). It tells the story of Hugo Cabret (Asa Butterfield), a young boy who lives alone within the walls of a Paris railway station tending to the station’s clocks, and his unique bond with the owner of a toy store. 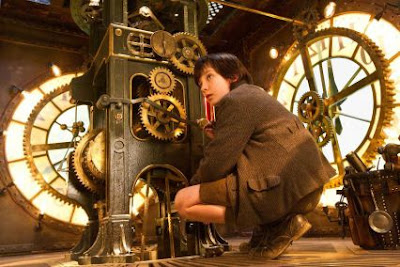 Hugo is set in Paris in 1931. We are introduced to Hugo Cabret, taken in by his uncle (Ray Winstone), an alcoholic responsible for maintaining the clocks in a Parisian railway station, when his father (played by Jude Law) dies in a museum fire. He was a master clockmaker who had started an ambitious project – repairing a broken automaton (a mechanical man) – before he died. When Hugo’s uncle disappears, he is left alone within the walls of the station were he tends to the clocks alone, steals food and searches for parts to fix the automaton.
His desperate lengths to fix the machine are shattered when he is caught stealing by the owner of the toy store (Ben Kingsley) and his notebook containing the blueprints for the automaton is confiscated. Heartbroken, he pleads with the man, whose name we discover is Georges Méliès, for the notebook to be returned, instructed to earn it back by assisting around the store. He also finds an ally in Georges goddaughter, Isabelle (Chloe Grace Moretz). Hugo introduces Isabelle to the magic of cinema (which he and his father frequented) and she assists Hugo by supplying the missing piece to the automaton, and together they uncover the secret about Papa Georges past – and ensuring that his legend is never forgotten.

As Hugo, I thought Asa Butterfield was fantastic, switching between emotions with veteran ease, and just witnessing his tear-soaked cheeks, or his face aglow with delight is enough to make you feel exactly the same way. Chloe Grace Moretz was less effective, and was very obviously ‘performing’, but I still found her to be quite good too. She has never failed to impress me yet (appearing in Kick Ass and Let Me In). But the highlight of the film is Sir Ben Kingsley, who I don’t remember ever giving a bad performance. He has been involved in some stinkers, but following up fine work in Shutter Island (Scorsese’s last film) this is one of the most heart-wrenching portrayals I have seen this year. A viewer will be overwhelmed with sadness as he recounts his cinematic past – and Kingsley plays it to perfection. The performances are so important in this story, considering the film is shot in 3D, and I think they are all very effective. 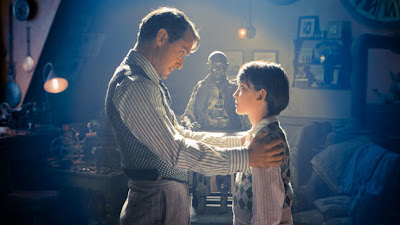 The film is steeped in nostalgia, and dense themes that extend from romanticising cinema as a machine made up of individual parts that all have a role, to the whole world as one, and finding your place in the world – your sense of purpose – and ensuring that your purpose is never forgotten. It is a sentimental story, but one that genuinely earns your emotions. It’s never overbearing with the score (which is tremendous work from the incomparable Howard Shore) or manipulative. It’s lacks the slapstick fun of something like Tintin (a film I have been asked to compare with on a couple of occasions – and Hugo is a better film overall) but it is incredibly profound, and I was won over by the unquestionable beauty of the film. But with the technical proficiency in filmmaking at a very high standard these days, does the story hold up?
Just like there are pieces that fit together to make up the machine that is a film – sets, costumes, performers, and a projector to screen it – for Scorsese, there are filmmakers and previous eras of cinema (some all-but forgotten) that are pieces to who Scorsese is today as a filmmaker. He would not be the filmmaker he is today without George Melies existing, or Powell and Pressburger (Scorsese’s primary influences) decades later. This is not just a wonderful fantasy tale, but it is Scorsese’s love-letter to cinema – and the second half will be a dream come true for any lover of cinema, and any child with an interest in science and invention, and with a dream of being able to help others. There is a lovely line spoken by Hugo, as he is declaring what cinema meant for him and his father: "My father used to say that going to the movies was like watching your dreams in the middle of the day" or something to that extent. It really is incredible how accurate that is, and Scorsese has tried to replicate exactly that with his film. 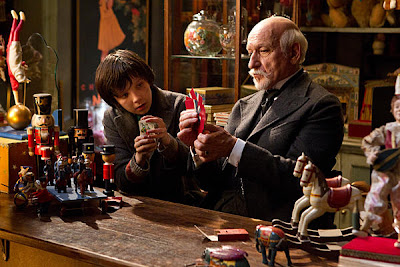 I felt that Hugo’s initial mystery, discovering the key necessary to resurrect the automaton was solved a little too quickly. My expectations were thrown because I figured that this would be the mystery that would encompass the entirety of the plot. Ultimately, it unlocked a new mystery – and this is where the true magic of the film lies. One of the most famous images in cinema – a spaceship crashed into the eye of a face within the moon  – becomes the motivation behind a new search. How does this image relate to Hugo’s father? And why was Papa Georges so distraught when he discovers the images within the notebook?
I can’t quite put my finger on why I had some niggling qualms with the film, but, despite enjoying it immensely (how could I not – it’s a film buffs delight), I initially felt this mild wave of disappointment. This has subsided since the viewing, but I still feel like there are a few issues with the film that should be recognized. The dual agendas, telling a child’s fantasy adventure, while informing viewers about the magic of the dawn of cinema, and how a rich imagination and a fascination with invention and how things work can ultimately change people’s lives, don’t quite gel as well as intended. 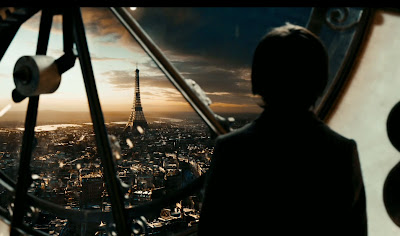 I’m not familiar with Brian Selznick’s source material, and John Logan is an excellent screenwriter, but I felt like Scorsese has just missed telling a universally appealing story here. There are lots of things to consider – and the film evolves in surprising ways – but I honestly don't think it is going to successfully entertain a lot of young people. Adults will find it powerful, but then there is an obstacle of relation; the central character being a child. It does feel like it stuck in no man’s land at times – but the wonderful cinematography (enhanced by impressive digital effects and some of the cleverest use of 3D I have seen), the intricate re-creation of 1930’s Paris, and the glorious set design and costuming, will no doubt leave viewers in awe.
The first twenty minutes of this film is so mesmerizing – we are introduced to all of the key characters (with the exception of Isabelle) in a number of incredible sweeping shots across the station, and end up following Hugo through his labyrinth of staircases, ladders and slides, as he tends to the clocks – that we forget we are yet to see the film’s title appear. The way that the 3D, the most advanced technology today, is tied in to the groundbreaking technology of the origins of cinema is quite ingenious really.
The appearance of Michael Stuhlbarg’s character at the half way was peculiarly convenient, and some of the sub-characters, which actually comprise of a sizable chunk of the film’s running time, also felt like pointless distractions at times. Sacha Baron Cohen’s station inspector had some really amusing moments (mostly via teleconferencing to his superior) but his unshakeable dedication to ridding the station of orphans didn’t feel justified, and a little forced - to provide a villain of sorts - and became repetitive.

There are several other characters whose stories are told via the sweeping shots through the station – including Monsieur Labisse (Christopher Lee), a bookshop owner. Each of these characters is missing something in their lives, and though Hugo isn’t directly involved in them finding that missing part – it relates to the theme that everyone is searching for something to make their lives complete, and through Hugo, who often observes their lives from within the walls of the station, we watch these individuals become complete. So, despite some niggling faults, and taking a few days to process the story, I have to admit Hugo has won me over. Martin Scorsese is a master filmmaker, and if this were to be his final film (who knows?) I could not think of a more fitting way to finish up. I am looking forward to checking it out again, and I urge you all to do the same.