Young Adult is the new film from writer/director pair Diablo Cody and Jason Reitman (Juno). Mavis Gary (Charlize Theron) is a divorced 37 year-old ghostwriter living in Minneapolis, Minnesota, famous for the Waverly Prep series of young adult novels. She is facing a deadline to complete the final book in the series, which is soon-to-be-cancelled, but is experiencing creative block and suffering from depression and self-depreciation, further distracted by an email she receives from her high school boyfriend, Buddy Slade (Patrick Wilson), who is married with a newborn. Mavis' life is a mess. Her home is a disgrace; she drinks copious amounts of Maker's Mark Bourbon, and fights off brutal hangovers with huge swigs of Diet Coke and fast food. Even her dog suffers. Above all, she is a rude, self-involved and ungrateful bitch. 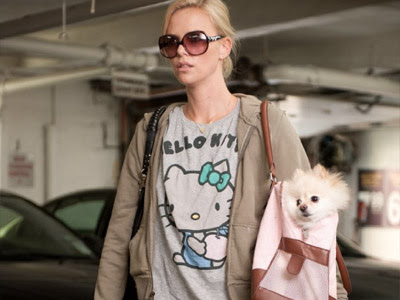 Stuck in a rut, and obsessed with her deluded agenda of winning Buddy back, she returns to her hometown of Mercury, sticking in on the drive an old mix tape given to her by Buddy. She sets up a meet with him at a sports bar the following day, and at a different bar reconnects with Matt Freehauf (Patton Oswalt), an old classmate she barely remembers. They recall his beating in high school, which left him partially crippled, and Mavis divulges her plans to win back Buddy. Matt runs a bourbon distillery in his garage, and seems to be the only person willing to be in Mavis' extended company. Buddy invites Mavis to his home to see his daughter, then to a bar to watch his wife Beth's (Elizabeth Reaser) band's play, and finally to his daughter's naming ceremony - alluding that their relationship is more complex than it seems. But, will revisiting her past help Mavis to learn how to finally grow up?

Young Adult is littered with hilariously awkward exchanges and situations, and though it is a very funny film, it feels odd to call this film a comedy. As a fan of The Office and Curb Your Enthusiasm, which achieve success in making embarrassing situations an odd delight to watch, this was certainly right up my alley. The film is slightly skewed from reality, but still close enough to evoke a viewer to shift uncomfortably. Mavis insensitively calls Matt 'hate crime guy', and in her attempts to impress Buddy, meticulously dolls herself up with a pedicure and manicure and thick layers of make-up. The laughs do dry up in the second half, as the situations become even more cringe inducing and the dramatic arcs of the story take shape. 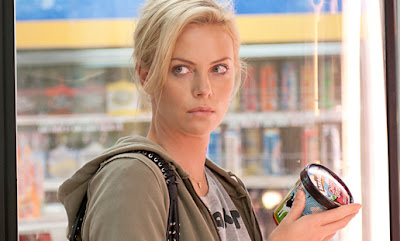 As much I like Jason Reitman’s films (Up in the Air was one of the best films of 2009), Young Adult didn’t really feel like it was directed by Reitman. There was a distinct lack of personality behind the lens, and the film is effective due to Diablo Cody’s vision and clever writing, and the performances. There isn’t much I can say about the film’s style – it’s not especially inventive in the way it is shot or edited - but makes great use of the close-up. Theron, despite her sour face and cringe-worthy delusion and embitterment, still looks absolutely stunning. Reitman has established an effective vehicle for this fearless and provocative character study.

Theron again proves why she is one of the best actresses working today, delivering her most Oscar-worthy work since Monster. She carries this film, teasing at her character’s traits (pulling incessantly at her hair, for example) and convincingly relays that Mavis is a scornful, ungrateful and embittered juvenile. She genuinely does look drunk all of the time. It’s an incredibly bold portrayal,  especially considering that most viewers will loathe her rudeness, her self-centeredness and her misguided agenda – but yet she still manages to draw sympathy. It’s incredible. Also effective is Patton Oswalt, portraying another unique and well-written character. The scenes he shares with Theron work, not only because of their odd chemistry, but because in a sad way, they are really funny. Not quite as well developed is Patrick Wilson's character, a conventional family-man still finding himself intrigued by Mavis' allure.
START SPOILERS: The next couple of paragraphs delve into the ending, which is really the only reason I took issue with the film and rated it as I did.
What is disappointing is that following one of the most outrageous sequences in the final act (some Theron acting gold), the point when this no-hold-barred character study hits a surprisingly new level of miserablism, it then kind of fizzles out. We aren’t really sure whether Mavis, following this embarrassing outburst where she realizes she seriously needs to consider making a change, is going to seek a path of redemption back to healthy lifestyle. Judging her solely on her natural personality, I expected her to remain horrible, but because I had developed such sympathy for this tremendously sad and insufferable human being, I hoped she would be able to get her life back together. 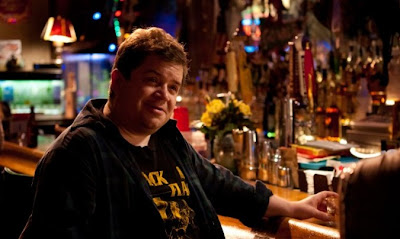 A conversation with Matt’s sister Sandra (Collette Wolfe) – where she encourages Mavis not to change her life, claiming that everyone in Mercury looks up to Mavis’ big-city life and material success as a novelist - is the very last thing this woman needs. Yet she completely embraces it, accepting it as sound advice. It seems like her path is set. Then comes the disappointingly cliched resolution where Mavis finally has the motivation to finish the final book as a result of her experiences in Mercury, all but closing her character in the novels – and suggesting that her prolonged adolescence, the one she has been fueling for her novels and now is stuck in, is over. But is it? The ambiguous way Mavis sways between these two paths, I didn't find satisfying at all. The film needed a different closing shot, one that should have produced some sort of emotion. It really was disappointing, to have laughed so much and been made to feel so uncomfortable, only to be let down by such a bizarre resolution.
END SPOILERS
Still, through the pen of Diablo Cody (a screenplay very likely to be nominated for Best Original Screenplay) and Charlize Theron’s impeccably unhinged tour-de-force of self-abuse, this is a top film well worth a look. Though I enjoyed Juno, I think this is the superior film. It has a bold edginess to it, it is funnier, has one of the most unforgettable lead characters to grace cinemas this year, and it has Theron, who deserves to be nominated for Best Actress. Shamefully, as it stands, this is unlikely to happen.
My Rating: ★★★1/2 (B)
Posted by Andy Buckle at 10:20 PM