Shame is released in selected Australian cinemas on February 9th.

There is a moment in Shame when Michael Fassbender’s character, Brandon, goes for a run in the middle of the night. Whether this is a common practice for him is unknown to us as viewers, but sometimes (and many viewers will relate) it feels necessary just to run to briefly escape the stress of your life. Feeling claustrophobic and constricted by the unannounced arrival of his estranged and mentally unbalanced sister, played by Carey Mulligan, trying to wrestle with a destructive personal ‘affliction’ while also brimming with frustration and self-loathing, who can blame him for running aimlessly through the city. The incredible extended take, with tracks Brandon as he is running, allows viewers’ time to process all that they have seen up until this point too, and I can assure you, it's pretty harrowing stuff. 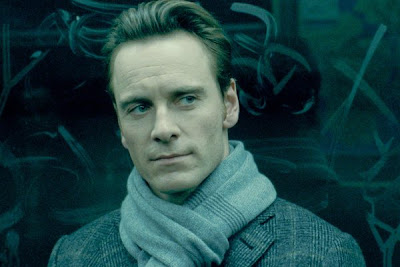 Shame is the second film from British writer/director Steven McQueen (Hunger) – and ever since it premiered at the 2011 Venice Film Festival, where Fassbender won Best Actor, it has been drawing acclaim and controversy in even doses. Shame was distributed with an NC-17 rating in the United States, which in-turn means the film can’t be shown in some cinemas. Set in New York, Shame captures about a week in life of Brandon, a handsome, successful and wealthy thirty-something who works in corporate business (or something to that extent). He has a beautifully positioned, but bland, high-rise apartment, and an active social life. But Brandon is wrestling with a compulsive personality – surviving day-to-day within a personal prison, coping with an uncontrollable addiction to sex. We learn that he fuels it in a number of ways – random romps with co-workers, paying for prostitutes, and self-satisfaction. Though he is emotionally withdrawn, and shuns commitment to a relationship, his life is ordered. When his emotionally fragile sister, Sissy (Mulligan) turns up to stay for a while, a romance with a co-worker blossoms, and his work hard drive is found to be 'corrupted', his lifestyle, along with all of his secrets, is sent into turmoil.

What makes Shame such a stirring experience are the phenomenal performances (even down to the supporting cast – James Badge Dale as Brandon’s boss is excellent) and McQueen’s distinctive craft, which ensures that the maximum amount of impact is drawn from every scene, rewarding an audience’s observation and patience. McQueen loves to use the long take (the 15+ minute unedited conversation between Michael Fassbender and Liam Cunningham in Hunger is a prime example). None of the extended takes in Shame approach this length, but nonetheless feature impressive work from the actors (who have genuine chemistry) and DP Sean Bobbit. His camera maintains an observatory distance on most occasions, working in clever focal changes and seeming to float around Brandon’s apartment or his lifeless office building, while also becoming intimate at times. The over-the-shoulder shots of Sissy and Brandon as if eavesdropping, and some of the sex sequences (in particular an extended one between Brandon and Marianne, which is the closest the film comes to being erotic or sexy) are examples of this. 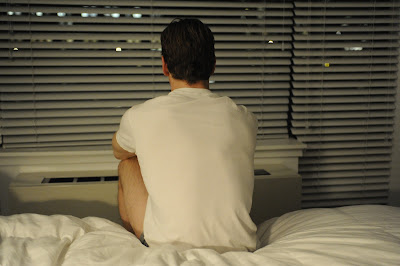 What more can be said about Fassbender here? He is phenomenal. Incredibly hardworking and sought after (this is one of four films he was involved with in 2011), he is one of the best actors of his generation. His unflinching boldness and commitment to this performance is the kind of work that wins Oscars. I was continually surprised by his ability to balance being charismatic, polite and charming, while hinting at being completely clueless about relationships and nervous around women he has any feeling for. He is also cold behind the eyes, keeping at bay volatile bursts of anger by finding a way to feed his compulsions and desires. It is never really revealed why he is this way - but we can only assume it has to do with his upbringing.
Almost all of his interactions with women are purely on a sexual, and emotionally distant, level. Though he declares that he isn’t nervous on his date with Marianne (Nicole Beharie), it is rather clear that he is. His attempts to build a conventional relationship with a woman fail embarrassingly. There are some brilliant moments littered throughout the film - Brandon's stare-down of a woman on the subway, the heartbreaking look on his face as he follows a man into a sex booth (bringing back memories of Midnight Cowboy), the way he absently watches porn out of habit, and his crude attempts to pick up a woman in a seedy bar, even when he learns she is with someone. 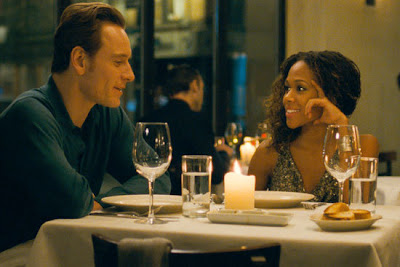 As bleak and depressing as the subject matter is, and how distant we are often kept from Brandon, there are some moments when we are brought right into his unsettling world. Some may disapprove and be repulsed, but many will sympathize and care about this man. The same can be said for Sissy. We hear her version of New York, New York and discover that she has immense talent, but wonder why she is so troubled. Her estrangement to her brother and family can’t have helped, but she seems to use people disrespectfully and also be a victim of a number of failed relationships. It is never really made clear what brings her to New York to stay with Brandon - but we can only assume that she has nowhere else to go. Loud, crass, obnoxious and insecure, Carey Mulligan completely nails the role, and it is not only the best work of Mulligan’s career, but it has been a sadly overlooked performance in this year’s award season. The same can be said about McQueen, whose boldness to pursue such subject matter and his interest in capturing his observations of human suffering is essential to the impact that this film leaves.
Shame will probably be most remembered as the film about ‘sex addiction’ but it is so much more. It’s a film about broken people struggling to keep a grasp on their lives. Brandon is handsome, charismatic and likeable on the surface, but he is battling with internal demons and an ever-present anxiety about his debilitating sickness (which is just as destructive as alcoholism or drug abuse). Shame will also be remembered for its classification (an unjustified R18+ rating here), and marketing this film will be difficult. For a mature viewer, though, the sex in this film is so void of passion or emotion that it becomes almost non-existent. It is the characters and the ‘affliction’ that are very much alive, and where the film’s resonance lies. Addiction is cyclical, and often re-ignited following a failed attempt to evolve. It is a self-destructive curse on Brandon. But even in the film’s simple but ambiguous concluding shot – which initially felt a bit forced – viewers are asked to recall several themes present in the film. Some viewers might be frustrated by the film’s repetitive second half, and the predictable story arc, and I can see why, but the more I have thought about this film, the more I think this repetition is the intention. 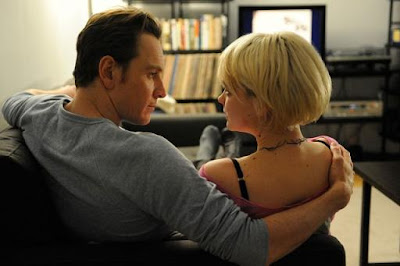 Before I wrap up, a quick mention must go Sean Bobbit’s calculated and impeccably precise cinematography (which has some of the best directed framing in any film this year), the editing by Joe Walker (which often cuts together various events from Brandon’s night out of order, as they seem to flicker through his memory) and Harry Escot’s score, which builds to a rousing crescendo during one particularly raunchy sequence (eliciting all the pain and anguish on Brandon’s face) but is arguably even more effective in less dramatic moments, like Brandon’s aforementioned late night run. Wow.

This powerful drama will leave one feeling emotionally drained, but I felt like the second half became a little forced (despite some attempts to misdirect) and left the characters somewhat underdeveloped. On the other hand, McQueen leaves an air of mystery behind.This is a stirring and provocative drama about a pair of broken souls trying to fix themselves, and if you're interested in seeing the finest work to date from a pair of talented young actors at their most bold, then this is essential viewing.