I watched Shiri as part of the 'Birth of the Blockbuster' program at Cinema on the Park, held at the Korean Cultural Office. Extensive coverage of Korean film in Australia can be found at the KOFFIA Blog.

Shiri is a 1999 South Korean action film written and directed by Kang Je-gyu. With a distinctive 80’s action aesthetic – and the score played a large part in building the 80’s tone - which was either an intentional look, or a result of the filmmaker’s ambitions limited by the budget, Shiri certainly has its influences. Having said that, at the time Shiri was the highest funded Korean film in existence. I imagine setting the climax in a packed football stadium would have taken a large slice. An energetic storytelling style, strong performances from a who’s who of Korean cinema, and a couple of impressive (and violent) action sequences overcome the holes and loose ends in the plot, and the occasions where the audience’s intelligence is not respected, and make Shiri not only a significant film in Korean cinema, but the birth of the ‘Blockbuster’ in Korea. 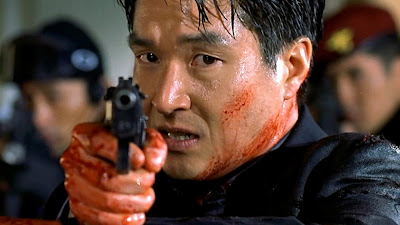 The film opens with an extended montage introducing us to a highly skilled female soldier, Lee Bang-hee, completing a strenuous (and brutal) training regime as part of a North Korean military unit. In short, these agents learn to kill by killing their classmates. As the behest of the commander, Park Mu-young (Choi Min-sik, Oldboy), Lee Bang-hee is sent into South Korea as a sniper and assassinates key South Korean government agents.
Two South Korean special agents are assigned the task to prevent the Northern agents from destroying Seoul, and eliminating more high-end government. Yu Jong-won (Han Suk-kyu), who is engaged to Yi Myung-hyun (Kim Yoon-jin), a former alcoholic and owner of a fish an aquarium supply store, experiences nightmares about Hee murdering he and his partner, Lee Jang-gil (Song Kang-ho), a job-obsessed bachelor. The film shifts between Park as he evokes havoc on South Korea and the agents, who desperately try and anticipate his next moves. Along the way, Hee, shows up to pose an additional threat.

What action blockbuster would be complete without a plot to blow something up? Park steals a deadly liquid explosive, manufactured by the South Korean Government, which is indistinguishable from water. But, under the right conditions – light, and heat – it is combustible and capable of wiping out an entire department store. In the film’s climax, a North/South uniting football match is threatened, with bigwigs from both governments in attendance in a private corporate box. Of course, a big deal is made about the countdown – as we watch the clock ticking down, with the heroes trying desperately to find and stop it.
This climax – which completely disrespects the intelligence of the audience on several occasions – is, for the most part, an impressive finale. It is the convincing action sequences that precede it, that I found to be ever better, however. The film also builds some strong relationships – between Lee and Yu, and Yu and Yi – which build an emotional connection to these characters, and features great performances from Choi Min-sik (so good in Oldboy and I Saw the Devil) and Kim Yoon-jin, who many will have recognised as being a regular cast member of LOST.
It is certainly influenced by 80’s and 90's American action blockbusters, but utlising the volatile Korean politics, Kang je-gyu has given the formula his own twist. In the scale of Hollywood action blockbusters, Shiri is relatively low budget, because the film only cost $8.5 Million, but at the time it was the biggest budget allocated to a Korean movie. 6.5 million people, making it the biggest box-office success in Korean cinema at the time, saw it in South Korean cinemas. These box office records were broken a year later by Park Chan-wook’s excellent film, Joint Security Area, which I will be reviewing next.
With the exception of the cheap 80’s aesthetic, which was a detriment to the film’s plausibility on occasions but also effectively gave the film a look that resembles pulpy action films like John Woo's Face/Off – but more political-based and serious, and less senseless fun – and some pretty predictable twists, though they are slickly revealed, this is a consistently engaging and well-acted action thriller.
My Rating: ★★★1/2 (B-)
Posted by Andy Buckle at 3:22 PM