Men In Black was released in 1997 – and though I didn’t see it in the cinema, I distinctly remember Will Smith still being a hip-hop star and dancing in the video clip for the theme song. It is a film that still has a cult following and provides good entertainment value. Having not seen the 2002 sequel, which I believe is terrible; it is a long time between drinks for me and the Men in Black franchise. Barry Sonnenfeld, a former cinematographer on some Coen Bros. films turned director – and he has Get Shorty, Men in Black I and II and Wild Wild West to his name – returns to direct, with the screenplay adapted from The Men in Black by Lowell Cunningham. I’m not sure how in-demand this second sequel was, but it has proven to be a costly exercise. Thankfully, it was entertaining enough, and has some quite impressive features that should appease fans. 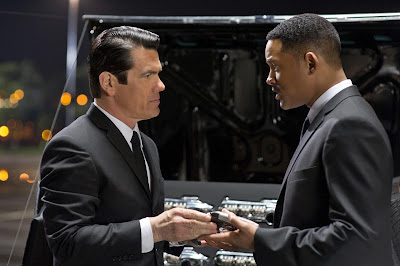 Will Smith and Tommy Lee Jones reprise their roles as Agents J and K, the veteran black suit clad MIB field agents assigned the role of monitoring alien activity on Earth and ridding the world of undesirable alien antagonists. The pair are working through communication problems and in their own way mourning the passing of the MIB director, replaced by Emma Thompson’s Agent O.
K becomes even more agitated when he learns that Boris the Animal (Jermaine Clement, unrecognizable and if I wasn’t informed as to who was playing this role I would have had to look it up) has escaped from a maximum security, moon-based prison and is beset on unleashing an army and taking over the world. K had arrested Boris 40 years prior and when Boris finds the means to travel back in time he plans to rewrite history – namely eliminating K. J, having discovered he is K’s only chance to defeat Boris, and that killing Boris in 1969 is the only chance to avoid an invasion in the present, also takes a jump through time – partnering up with a significantly younger K (a charismatic Josh Brolin) along the way.

Though there are stretches without laughs, and some of the jokes start to get a bit repetitive, there is still some effective humour. The fun doesn’t hit its stride until the central plot takes shape and J finds himself slugging chocolate milk and visiting 1969. There are some cool set pieces in this time period – J visits Coney Island for example - and plenty of jokes centered on the different technology at MIB’s disposal. The neutralizers certainly got more compact. 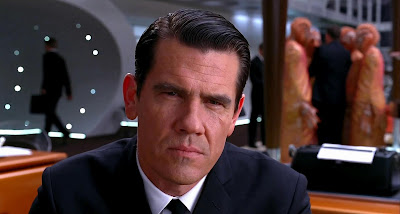 The script has bee well publicized, as being non-existent for a period of filming, and though there are issues with the film’s flow, it could have been a lot worse. What was disappointing about this film was certainly the villain. Though the idea of travelling back in time is not an original one, it is handled effectively, but what they travel back to do is not particularly interesting.
It is never really justified why Emma Thompson had to be involved other than to add another level of intrigue to K, who may or may not have had a romantic fling with O back in the day. This film attempts to give J and K a little bit more depth. J is continuously wondering what happened to K, and how he was before he became world-weary and cynical. As an always-welcomed screen presence, it was disappointing to see Tommy Lee Jones relegated to a supporting role, but Josh Brolin – whose impression of a younger version of the veteran is spot on - is excellent and the fresh face this franchise needed here. There are also some amusing cameos, though they are better left unrevealed. 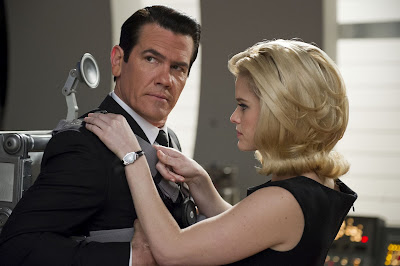 There are some quite impressive visual effects and creature design, and a lot of scenes – especially those set within the MIB Headquarters – have a lot of detail. The inventive sequences where Smith’s character takes his leap through time are also very good. The film’s climax is also set at the site of the launch of Apollo 11 on the days prior to the infamous 1969 Moon landing, which was also innovative. I also really liked Danny Elfman’s score though it was obvious at times that it was the feature giving the film energy, and not what was happening in the scene.
While Men in Black 3 is not a strong enough film to justify a cinema trip in 3D, a faithful Men in Black fan should find nothing to disappoint here. For those unfamiliar or unacquainted with the characters, there is very little here to warrant using this film as an introduction. It has a great performance from Josh Brolin, and some inspired ideas, and from my understanding is an improvement over the first sequel, but overall, it is another pretty forgettable franchise outing.
My Rating: ★★1/2 (C)
Posted by Andy Buckle at 1:01 PM