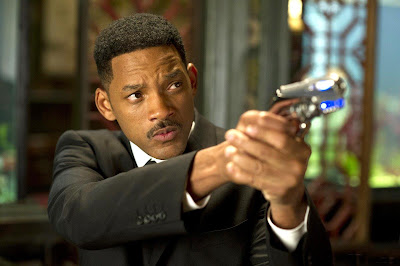 It is another uneventful week at the cinema. May has been one of the worst months of cinema I have experienced since I have been regularly attending the cinema and tracking what is released on a week-by-week basis. There are just two new releases in Australian cinemas this week - Men In Black 3 and Bel Ami.

Men in Black 3 - Agents J (Will Smith) and K (Tommy Lee Jones) are back...in time. J has seen some inexplicable things in his 15 years with the Men in Black, but nothing, not even aliens, perplexes him as much as his wry, reticent partner. But when K's life and the fate of the planet are put at stake, Agent J will have to travel back in time to put things right. J discovers that there are secrets to the universe that K never told him -- secrets that will reveal themselves as he teams up with the young Agent K (Josh Brolin) to save his partner, the agency, and the future of humankind. I found Men in Black 3 to be somewhat enjoyable. An excellent Josh Brolin gives the franchise an effective dose of youth and energy, there are some inspired ideas, amusing moments and effective effects and creature design. Certainly not as bad as it could have been.

Bel Ami - Bel Ami is the story of Georges Duroy (Robert Pattinson), who travels through 1890s Paris, from cockroach ridden garrets to opulent salons, using his wits and powers of seduction to rise from poverty to wealth, from a prostitute's embrace to passionate trysts with wealthy beauties, in a world where politics and media jostle for influence, where sex is power and celebrity an obsession. Christina Ricci, Uma Thurman and Kristen Scott Thomas co-star. It has not received glowing reviews. Linked review courtesy of Sam McCosh at An Online Universe.


Weekly Recommendation: The Way. Best film I saw in a cinema this week. Alternatively, a night in with DVDs. Start with Tinker Tailor Soldier Spy and The Girl With the Dragon Tattoo, but if you're after something a bit lighter The Descendants, Hugo, The Muppets and Young Adult are all out. With the exception of The Avengers, they beat everything out in a cinema at the moment.

With the release of the new Men in Black film in cinemas world wide it must give you an urge to go back and watch some classic Will Smith movies. Why not sign up to www.lovefilm.com and get a free month trial where you will be able to access a huge database of movies online.
Posted by Andy Buckle at 9:51 AM