Polisse is the third feature film from French actress turned writer/director, Maiwenn, following The Actresses’ Ball and Forgive Me. The screenplay is co-written with Emmanuelle Bercot (who also stars) and when it screened in the Un Certain Regard at the 2011 Cannes Film Festival it picked up the Jury Prize. Scheduled to have a cinema release in Australia on June 28, it is also playing as part of next month's Sydney Film Festival, with sessions on Tuesday 12th and Wednesday 13th June. It is well worth a look. 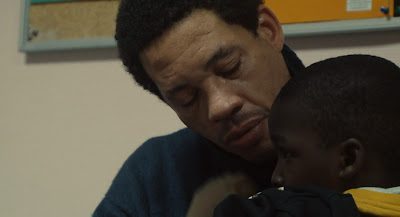 Polisse is a complex doco-style analysis into the lives of the hardened police officers that work in the CPU (Child Protection Unit) of the French Police Department, assigned with patrolling the streets of Paris and dealing specifically with cases involving the mistreatment of minors. The film provides a harrowing social commentary, both of society at large, and bureaucracy within the Police Department, and delves into some unpleasant realities about the prevalence of child abuse, and irresponsible parenting in a series of compelling cases that emerge throughout.

The harsh realities of the world they live in and the emotional exhaustion placed on the team in their work - long hours, managing the stress involved in interrogating suspected pedophiles and child molesters and suppressing any volatile emotions they may have, conducting searching for irresponsible parents who are in the illegal care of their child, finding homes for impoverished children and providing advice to teenagers engaged in extreme sexual experimentation, to name just some. The team is divided up into partners - and all are given screen time handling these cases. 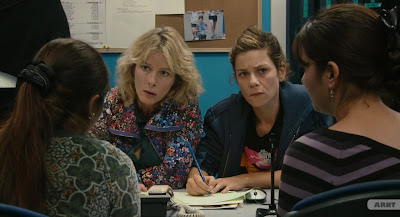 The most evident story arc involves Fred (an excellent Joey Starr), an emotional loose cannon, and Melissa (Maiwenn), a photographer from the Ministry of the Interior assigned to document the unit in action. One gets the sense that the film was supposed to be an account of these professionals through the eyes of this outsider – but it didn’t really feel like that, which wasn't at all detrimental to the film, but I do think that Maiwenn's personal involvement was unnecessary, and she was certainly not as strong in front of the camera.
One of the biggest qualms with the film was Maiween’s involvement as an actress. Her character, for a long time, had little-to-no impact on the film, and ultimately was not involved enough to warrant being there. If she had more direct involvement, other than becoming Fred’s love interest, or none at all, the film would have felt even more focused on the team, and further developed some of those characters. 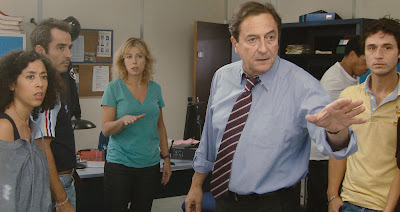 There are so many other interesting characters – amongst them, Balloo (Frederic Pierrot), the Unit Director, Iris (Marina Fois), a workaholic suffering from bulimia and facing a stressful period with her husband, Nadine (Karin Viard), coping with her recent separation from her husband, and Matthieu (Nicolas Duvauchelle), who's relationship with his partner is more complex than it seems – and each one is developed very effectively, given how much is going on.
What particularly impressed me about Polisse was the organic way the characters are introduced and developed, and how effectively their personal and professional lives are juggled by the skilled editing, which won a Caesar Award. Though the actors are portraying a character, they felt so natural in their roles and worked so well with one another, that these sequences felt like they were true-to-life documented events. It is a testament to Maiwenn’s immense research, and a sharp script – the dialogue exchanges are emotionally charged, but also wickedly funny. Maiwenn also proves she knows how to work with actors – and in the case of Joey Starr, she has worked with him before – and the key Unit cast completely embody their roles.
Though based on true-to-life cases, this fictional work makes every attempt to imbue the cases with a sense of realism. For the most part it feels like you are watching documented footage, but this is not always successful - largely the overly-melodramatic and poorly conceived ending. The use of the hand-held camera, which was intimate but never intrusive, situates us within the inner workings of this unit, capturing their casual interaction over lunch (often conversing about their relationship problems), the often-intense interrogations, and the way that their work impacts on their personal lives. These reactions vary between horror and disgust, sadness at the situations some of the young people find themselves in, to often uncontrollable amusement – which on one occasion asks us to question their professionalism, but in most cases is understandable and a welcomed change in tone. 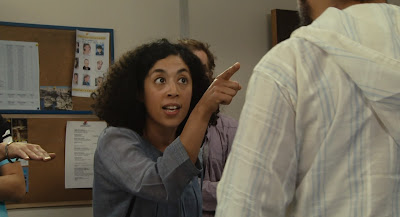 I guess what the film lacks is a central driving force. There is no central character, though some of the team feature more than others. I guess the centre of the film is the CPU. They are underappreciated heroes, who toil away dealing with undesirable situations every day, but they are also regular people, with complex personal issues. This film does a pretty good job – if a little loosely, and in the end a little too ambitiously – of balancing both. Despite the mentioned quibbles, this is a very good film. There is one scene in particular, completely unlike any other in the film - and it is a stroke of genius - that has stuck with me after. As a powerful doco-drama, a harrowing social commentary and as an intricate character study, this taut collaboration of a web of stories has plenty going for it. I wouldn't miss it.
My Rating: ★★★★ (B+)
Posted by Andy Buckle at 11:48 PM