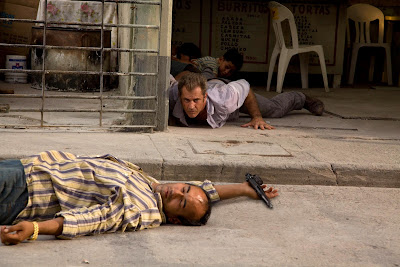 So, what's new out this week? What rounds out the month of dire releases? Actually, having finally seen Dark Shadows the other day it gave the month an unexpected lift. I enjoyed it. Looking back, I can really only recommend The Way (which had a tiny release in April, broadened in May), The King of Devil's Island and Dark Shadows, with The Five-Year Engagement and Men in Black 3 having their moments.

Due to lack of interest/motivation and missed opporunities I am yet to catch The Dictator, The Woman in Black, Bel Ami and this week's release Get the Gringo, and I doubt I will be seeing them. Get The Gringo, I hear, is actually quite good. I was not won over by the trailer (AWFUL!) and it does star Mel Gibson. Also released this week are What To Expect When You're Expecting, which I have seen, and Declaration of War, France's representative for Best Foreign Language Film and one I will certainly make an effort to see.

What to Expect When You're Expecting - Over the moon about starting a family, TV fitness guru Jules and dance show star Evan find that their high-octane celebrity lives don't stand a chance against the surprise demands of pregnancy. Baby-crazy author and advocate Wendy gets a taste of her own militant mommy advice when pregnancy hormones ravage her body; while Wendy's husband, Gary, struggles not to be outdone by his competitive alpha-Dad, who's expecting twins with his much younger trophy wife, Skyler. Photographer Holly is prepared to travel the globe to adopt a child, but her husband Alex isn't so sure, and tries to quiet his panic by attending a "dudes" support group, where new fathers get to tell it like it really is. And rival food truck chefs Rosie and Marco's surprise hook-up results in an unexpected quandary: what to do when your first child comes before your first date? You know what to expect. It's not TERRIBLE because it has good intentions, but what a mess.

Get the Gringo - Mel Gibson finds new life in a Mexican jail after getting caught at the border with $4 million dollars of Mobster money. Gun-toting, grizzly violence and plenty of bad one-liners ensue I am sure. Written by Gibson, Get the Gringo is the directorial debut from Adrian Grunberg. Many are criticising the film's swaggering attitude, but Gibson's performance (he is back in his element after all), and the blending of grim and funny, are being praised.

Declaration of War - The opening night film of last year's Critics Week at the Cannes Film Festival, this exuberant and deeply moving film follows a new couple, Romeo (Jeremie Elkaim) and Juliette (Valerie Donzelli), who must face the ultimate test when they discover their new born child is very ill. Gathering their friends and family together, they confront the ordeal together as a form of warfare. Donzelli infuses the story with unexpected verve using a host of cinematic techniques, music and heartbreaking performances that results in a film about a contemporary couple who surprises even themselves with their ability to fight not only for the life of their child, but for each other.

Weekly Recommendation: I think Declaration of War is the pick this week. Fans of hard violence and action films, and Mel Gibson (hmm), will probably enjoy Get the Gringo, and anyone who liked New Year's Eve (hmm) will find something to laugh at in What To Expect When You're Expecting. Still, I would hold out and see Prometheus on the biggest and best screen you can next week.
Posted by Andy Buckle at 10:05 AM