Take This Waltz has an Australian cinema release scheduled for June 14.

Written and directed by Sarah Polley (Academy Award nominee for Best Adapted Screenplay for Away From Her), Take This Waltz is an indie romantic drama set in a gorgeously photographed suburban part of Toronto and stars Academy Award nominee Michelle Williams, along with an impressively low-key Seth Rogen, Luke Kirby and Sarah Silverman. The title of the film, Take This Waltz, comes from the Leonard Cohen song of the same name. It is used memorably during the film. 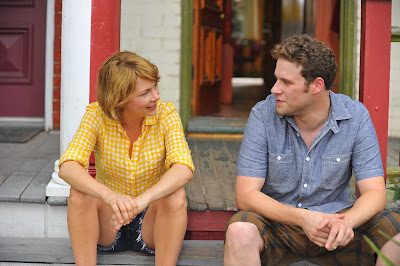 The central character is Margot (Michelle Williams, Blue Valentine), a 28-year-old writer, though it isn't clear what she has written, who meets the handsome Daniel (Luke Kirby, The Samaritan) on a flight back to Toronto. Having also crossed paths earlier that day, they share a conversation, and seem to connect after the initial awkwardness passes. Catching a cab together, Margot is surprised to learn that he lives across the street from her. It is clear that their chemistry is strong and intense but Margot suppresses her attraction because she is coming home to her husband Lou (Seth Rogen, Knocked Up), a cookbook writer, and a happy young marriage. But has their comfortable marriage, which to Lou and his supportive family idealistically eternal, become stagnant? Does Margot, who is discovering she is still coming-of-age in her late 20's, feel like she is living the life she wants to lead? Consistent run-ins with Daniel – and eventually secret rendezvous - and mounting sexual tension and desire, aren’t going to help. Will Margot give up it all?

In Take This Waltz, a film obviously very personal to Sarah Polley, Toronto is a character in itself here, and it is clear that she is in love with the streets, cafes, restaurants and beaches of her hometown. Setting the film in the summer ensures that the city feels enshrouded in this golden glow. Margot and Lou’s home is warmly decorated, while Daniel's is bright and vibrant. The days (and nights) look humid and sticky, the actors are often sweaty, and Margot and Lou constantly have the fan running in their room. It is a climate where a stuffy, chicken-odoured kitchen can lead to unchecked emotions running wild and an escape to the local pool for a dip (one of many of Margot’s stolen moments with Daniel) a welcomed reprieve. 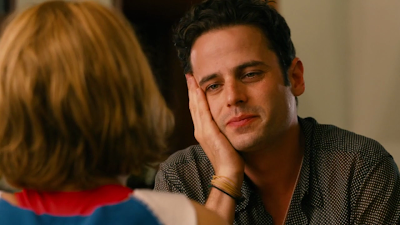 Polley also has a great ear for dialogue. The characters talk and act like real people talk. There are some very amusing exchanges, and also many that feel appropriately awkward. Margot and Lou argue over little things, but one accepts that their marriage is lacking the spice Lou throws onto his chicken. Margot feels constricted, irrational and irregular with her emotions and attempts to connect with Lou, who has settled into the domestic husband routine. While one can see her frustration, embracing Lou as he is working over a hot stove should indeed frustrate him. We observe these characters in these natural, homely locations and understand how they are thinking. Margot loves her husband, but after this fleeting meeting with Daniel, her life doesn’t feel as fulfilling anymore, and that is a torment that doesn't disappear. Essentially, the honeymoon period of their relationship is over - and a particularly awkward five-year anniversary dinner highlights this.

Due to the reserved originality of Polley’s storytelling technique, her well-established characters, and excellent performances (Michelle Williams is again outstanding) there are two very convincing relationships. Margot and Lou are so comfortable with one another that they have a childish way of conversing, and often find themselves wrestling on the floor, while Daniel tells Margot all she needs to know (though on one memorable occasion she wants to hear how he thinks about her) purely through the way he looks at her. It is a tragic unraveling and Margot has to come to terms with her own sought-after independence. She faces a phobia – connections; she craves attention and needs to feel connected to someone, but cannot handle the fear of being between desired connections - and is scared to leave Lou, but also miss out on a chance with Daniel. 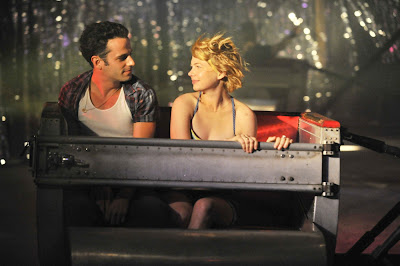 As I mentioned before, Michelle Williams is sensational. One on hand she is meek and appears to be frequently needy, but on the other she often does exactly what she wants. It took me quite a while to decide whether there was something mentally wrong with Margot. It is never made clear. She just got so used to her and Lou's cutesy way of communication, I guess. If it wasn't already clear that Michelle Williams is one of the best actresses around today - back-to-back Oscar nominations for Blue Valentine and My Week With Marilyn - it should be now. Luke Kirby is effective as the man infatuated, but respects Margo’s marriage enough to keep a distance. Seth Rogen, in a much more low-key and mature performance than we are used to, is also good, while Sarah Silverman shows surprising skill as Lou's alcoholic sister.

As an examination of a marriage falling apart, and the obstacles that challenge young relationships, I don’t think it works quite as effectively as Blue Valentine, a film I am sure comparisons will be drawn, but I found it much more successful than say Like Crazy. I felt like the film was a little too long, but the conventions of the genre are twisted in the final act and Polley provides us with a few surprises. Perhaps if the story had progressed to this point a little bit quicker, it would have remained entirely compelling. It moves a little slow, which will test the patience of some, but with rich themes, believable and sympathetic characters, an original approach to a genre that often feels exhausted and genuine emotional punch, there is plenty of reward to be found.