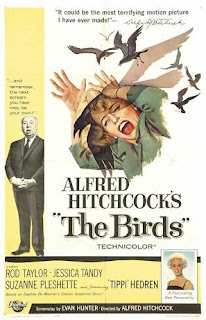 The Birds is one of Alfred Hitchcock's most effective horror chillers, and deservedly stands as one of the most respected horror films ever made. I first saw The Birds at a university lecture, and I think I watched it in the same week as Psycho. Compared to the latter classic, I didn't care for The Birds as much as I thought I would. But my recent viewing presented me with a completely different opinion of the film. Hitchcock is the master of building suspense, and there are many memorable moments of agonizing intensity in the latter half. Amongst his wealth of skill with film techniques, Hitchcock's work with the POV shot (much like in Vertigo) to either present the fears of the characters from their perspective, or to suspend their awareness of the horrors they are about to witness, is just masterful. Some of the special effects of the bird attacks seem very dated now, but are no less effective. The film begins quite silly, and Melanie's strange motives are put under question. But most Hitchcock films begin with the same deliberate pacing, and the intensity gradually begins to grow. Once all the characters remain trapped in Bodega Bay, and the series of bird attacks begin, it is very engaging. If you haven't yet seen The Birds, the rest of the review does contain some plot spoilers, as I analyze a few of the sequences, so don't read too far on if you wish to watch the film (and I urge you to do so) without knowing all the surprises.

The story centers on the blossoming romance between Melanie Daniels (Tippi Hedren), a wealthy socialite and daughter of a powerful newspaper mogul, and a San Francisco Lawyer, Mitch Brenner (Rod Taylor). The pair first meet in a pet shop, when both are shopping for birds. Brenner recognizes Melanie from a recent trial she was involved in, but pretends to mistake her for a salesperson, a role she flirtatiously adopts. Brenner is shopping for lovebirds for his younger sister, and begins to inquire about the birds in the store. When Melanie is caught out and discovers his game, she is both infuriated and intrigued, and decides to purchase the lovebirds for Brenner herself, who she tracks down through a contact at her father's newspaper. She learns that every weekend he travels down the coast to a small town called Bodega Bay in California, where he lives with his mother, Lydia (Jessica Tandy) and sister, Cathy (Veronica Cartwright).

Melanie seeks out his address and travels across the bay by motorboat, sneaking into the back of his house, and leaving the gift. Brenner, after discovering her stealth retreat across the bay, chases her down and invites her to accompany his family at first for dinner, and then to remain for the weekend. She reluctantly agrees. Melanie's arrival in Bodega Bay coincides with a series of bizarre altercations with birds, which gradually worsen. As soon as she arrives we see a large flock of birds flying ominously together above the town. Melanie is swooped by a seagull, inflicting a cut on her head, a seagull flies into the door of the house of local schoolteacher Annie Hayworth (Suzanne Pleshette), killing itself, and at Cathy's birthday party the next day, the playing children are swooped incessantly by seagulls.

Viewers are unlikely to forget the moment when Melanie sits on the bench outside the school, and crows begin to assemble on the play equipment behind her. At first there are only two or three, but by the time Melanie realizes, there are hundreds covering the entire playground and fence, formulating an intimidating presence. Accompanying this scene there is a complete absence of a score. All we hear are the occasional flapping to indicate that another crow has arrived, and an occasional chirp that is inaudible to Melanie. The Birds actually lacks a conventional, incidental score but rather uses sound effects and sparse source music in counterpoint to the calculated silences. It really works to heighten the suspense. 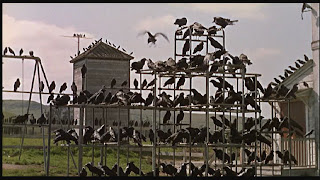 Another brilliant sequence is when Lydia drives around to the house of a local who had supplied her with chicken feed. She enters the house but finds it strangely quiet. As she walks from room to room she finds broken coffee cups and signs of a struggle. She finally enters the man's room at the end of the hall, and the camera adopts her point of view as she slowly scans the room. She spots the smashed window, which has cracks coated with blood and a seagull ensnared in the glass. Her eyes move to the right as she notices the room has been torn apart. She looks down and finds the legs of a man, his pajama pants ripped and bloodstained. She moves into the room, past the door and looks further, and spots the man slumped in the corner of his room. His eye sockets are bloody and empty and his eyeballs obviously gouged out, we assume by the birds. Hitchcock makes a series of quick zooms into his face. Lydia turns and sprints out of the house, gasping and choking in shock. Hitchcock implies that there is something horrible to be found in the room, but he withholds sight of it for as long as he can, and there are about six cuts, both of Lydia's face as she scans the room, and of what she sees, before the body is revealed. 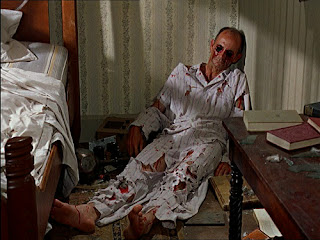 Following the attack on the school children, Melanie and Brenner and a few of the other locals find shelter in the local bar. An argument erupts about the existence of such an attack. Melanie claims that the children were attacked by the crows, which an elderly lady, who just happens to be an expert ornithologist, claims is impossible. Melanie's story is backed up by a local fisherman, who claimed that seagulls had recently attacked his boat. Another resident believes that the attacks are the sign of the Apocalypse. The conflicting arguments cause unrest, and force a lot of the residents to question leaving the town. Outside there is another bird attack, as a motorist at a gas station is knocked unconscious, and pumps gasoline down the main street. A series of violent explosions ensue, and another bird attack on the town, resulting in the loss of more lives. It is a truly terrifying film, full of many memorable sequences. Few people feel the same way about a flock of birds having seen this film. This is one Hitchcock classic that isn't as famous as more notable titles like Psycho, Vertigo, North by Northwest and Rear Window but it is a true marvel of the horror genre, and in my opinion is one of Hitchcock's most technically effective cinematic ventures.
My Rating: 4 1/2 Stars
Posted by Andy Buckle at 1:16 PM