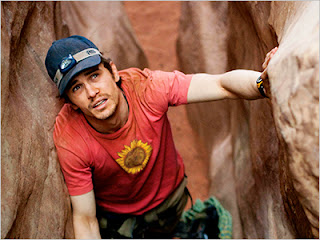 To tell the gut-wrenching but inspirational tale of mountain-climber Aron Ralston and turn it into a dynamic heart pounding thriller, it would take the incredible vision and flair of dynamic filmmaker, Danny Boyle (known for Trainspotting, 28 Days Later and Slumdog Millionaire) and a flawless performance from Oscar nominee James Franco. The pair deliver impressively, transforming 127 Hours into one of the best cinema experiences of the last decade. Boyle, along with fellow screenwriter Simon Beaufoy, have adapted the story of Ralston's staggering journey from the account in his autobiographical novel, Between a Rock and Hard Place, into an inventive but accurate screenplay that has been awarded with an Oscar nomination. 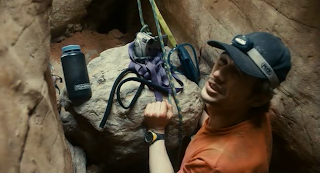 Aron Ralston (portrayed by James Franco), an experienced hiker and adventurer who lives a cavalier life fueled by the rush of adrenalin, falls into an isolated chasm in The Canyonlands National Park of Utah during the summer of 2003, accidentally dislodging a rock when he explores a narrow crevasse, that falls with him and crushes his arm against the canyon wall. Trapped within the canyon for five days, he tries every means at his disposal to move the boulder. He chips away at the rock to make room to pull his arm free, and creates a pulley system using ropes and climbing carabiners in an attempt to lift the rock.  He suffers fast approaching dehydration, the volatile climate (including a near fatal flooding of the canyon) and vivid hallucinations and mind-wanderings that document earlier periods of his life, before finding the strength to survive the ordeal by trying the only thing left to be done, to sever his lower right arm with his multi-purpose knife.

During his horrific ordeal Ralston has time to examine his life and evaluate who he is, who and what he will leave behind, and the life he still hopes to live. He recalls his closest family, his friends, his former lover (Clemence Poesy) and the two female hikers (Kate Mara and Amber Tamblyn) he had met and guided to a hidden swimming pool on the morning of his accident. He contemplates his chosen lifestyle, and emotionally dissects his decisions and confesses his painful regrets to the camera, which he uses at intervals to document his ordeal. We are revealed that he is a man who has always been selfish and alone, even amongst a crowd. He has always lived for the moment and concludes that his chosen lifestyle led him to this, the point of being trapped under a rock to contemplate who he is. Suffering from dehydration, sleep-deprivation and shock, he delves deep into his psyche and finds his faults and acknowledges the mistake of choosing not to tell anyone where he was going, before finally summoning the courage to extricate himself from his near-hopeless situation and miraculously reach help. 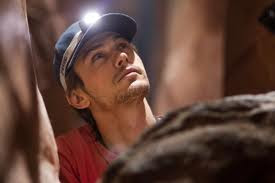 Even knowing that Ralston manages to escape and survive, 127 Hours is no less engaging. It is fascinating to watch how resourceful the man is with his few belongings, how incredibly calm and calculated he remains mentally, and how truly awe-inspiring it is to see him finally break free of the boulder. It made me want to hurl, but inspirational nonetheless. This is not just a tragic survival story but also a tale about the extremes of humanity and the lengths some individuals will go to preserve life. It is the story of a man who gave up waiting to die, and decided to live. 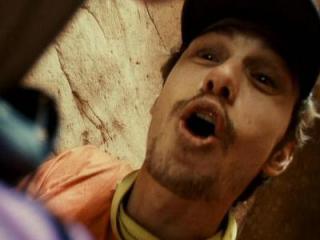 Danny Boyle has shown in his previous films that he is a dynamic storyteller endowed with a gift for visual flair. Even from the opening sequences of 127 Hours, Boyle's zippy camera work endows the film with a raw energy that is the perfect tool to encapsulate the mindset of its adrenalin-junkie protagonist. The image is split into multiple shots that have Aron driving through the night, contrasted with sped up captures of heavy traffic. When he eventually sets out through the desert on bike, he is shown speeding over the harsh terrain from an assortment of angles varying from active close-ups to high tracking aerials, often with multiple displayed at once. The sun-drenched cinematography is gorgeous, and the swift editing just as impressive. Later, when Ralston is recording himself down in the chasm, Boyle often cuts between the digital video footage he is recording of himself with the actual narrative captures, often to startling and amusing effect. One example is when Ralston creates multiple personalities and imagines he has been invited onto a talk show to discuss the decisions he made that resulted in his predicament. Other dynamic cinematic techniques are used expertly to display a series of hallucinations and delirious flashbacks that reveal memorable moments in his life. The diverse, pulsating score by A. R Rahman (a past Boyle collaborator who won an Oscar for his work on Slumdog Millionaire) is also a superb accompaniment to Boyle's hyperactive camerawork. 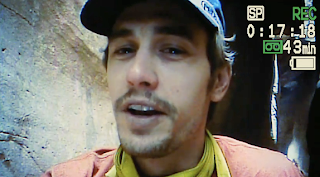 127 Hours is grueling, intense and harrowing viewing with some moments near the conclusion that are very difficult to watch. But Boyle's authenticity and realism here must be commended. With the exception of Ralston's meeting with the female hikers, which the film extends to include the sequences at the secret pool, I believe it is factually very accurate. We are extended to the edges of humanity through Franco's standout emotional performance. Franco's immense talent has always been recognized, but this is a career role that allows him to reveal his full range of skills. He is Colin Firth's closest challenger in the race for Best Actor at the end of the month. Along with Darren Aronofsky's Black Swan, which also examined the tortured human psyche, 127 Hours is one of the most outstanding cinema experiences I have seen in some time. It is exhilarating, hard-edged entertainment that is based on near-unfathomable true events, which makes this admirable adaptation of Ralston's experience even more astonishing. Few films will more effectively have you consciously evaluating and cherishing your existence.