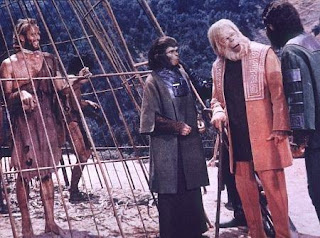 The sequences I have selected for this critical analysis are a trio of scenes beginning about forty-five minutes into Franklin J. Schaffner's 1968 film, Planet of the Apes. I will be examining the films distortion of the convention of the foreign 'Other', commonly featured as an antagonist to humanity in the science fiction genre. At this point of the film, Taylor (Charlton Heston) has been captured by the Apes and held captive inside a cage within the walls of the city. Dr Zira (Kim Hunter) brings Dr Zaius (Maurice Evans) before Taylor with the goal of making him speak again, and to suggest that he may in fact be more interesting than Zaius had previously suggested. Taylor tries to speak but because of his gunshot wound to the throat during his capture he is incapable of verbally communicating with Zira. Zaius finds it amusing to see a man "acting like an ape". This is a very interesting comment because, commonly, when we see animals captured through the media, we are amazed and amused when we see animals, and particularly apes, behaving with a personality that seems to closely resemble the human being. It is Zira's belief that Taylor can understand them and is capable of communicating, but Zaius quickly rejects the idea, sternly responding that "man has no understanding; he can be taught a few simple tricks, but nothing more" before concluding that man is a nuisance and that complete extermination was the only necessary response.

The concept of the 'Other' in Planet of the Apes is reversed. The audience is initially asked to identify with Taylor, but when we are confronted with the humans already living on the planet, we quickly reassign our identification to the Apes, but at the same time feel mildly threatened by their superiority. The Apes possess many key human characteristics; they are sophisticated, they have desire to be clothed and have the ability to talk. It is interesting that we are asked to differentiate Taylor and his crew from the primitive humans before we meet the apes. This is important to demonstrate the idea that the human has regressed to a state of primitive survival on a planet we know to exist in the future. The Planet of the Apes presents the humans as the feared 'Other' on a planet they clearly do not belong to. This is opposed to that of an alien or mutated being entering the human sphere and attacking humanity, as commonly represented in the genre.

The first interior scene fades out, and then cuts to an outdoor location. We see Taylor and Nova pacing inside another large cage. As they walk the camera tracks them in a circular motion to the left of the frame from outside the cage, visually expressing their claustrophobic confinement. In this sequence, Zira brings her fiance Cornelius (Roddy McDowell) to see Taylor, but they are interrupted by the arrival of Dr Zaius. We see the first evidence of hierarchy within the ape colony, as Zaius is referred to by Cornelius as 'Number One'. As an orangutan he represents an ape of the highest order in the city, an ape that both gorillas and chimpanzees answer to and whose respect they want. It is amusing to see him refer to Cornelius as an 'ape with a shovel', a derogatory mocking of his inferior class and ignorance of his profession. During Taylor's continued attempt to communicate (now by scratching in the dirt that lines the cage) a brawl breaks out between Taylor and one of the other humans. There are no sounds emitted by the men (as they remain incapable of speech) but the score is piercing and the tension of the sequence is heightened by a cross-cutting of varying camera angles from both inside and outside the cage. At the conclusion of this sequence when Taylor has once again been contained, Zaius and one of the guards laugh about Zira's idea of domesticating man, deeming it impossible. This is a perfectly acceptable response following the 'primitive' scuffle. Clearly Taylor has the capacity for intelligence, but until he is able to demonstrate his full knowledge, he will remain non-differentiated from the other humans, and a figure of ridicule and disgust amongst the Ape population.

The final sequence I will look at immediately follows this one. Taylor is once again enclosed inside. He grabs Zira as she approaches and steals a pen and paper from her. He demonstrates an ability to write ('my name is Taylor') and an even stronger bond is developed between the two. In a rare alteration of power within the film, we see a point-of-view (POV) shot of Zira looking up at Taylor within the cage, followed by one from inside the cage of a now free standing Taylor looking down at Zira. For the first time Taylor has some element of power, and non-primitive capability. The scene then cuts to Taylor writing notes to Zira and Cornelius at a desk in a small room. Cornelius dismisses the possibility at first and refuses to accept the existence of another planet when Taylor writes that he learned his skills at 'Jefferson Public School, Fort Wayne, Indiana'. We discover at the conclusion of the film that there is no other inhabited planet and that the planet now ruled by Apes is in fact Earth. Planet of the Apes raises ideas about the survival of the species and suggests that humans may eventually become the cause of their own destruction, forced to resort to a primitive period of survival. 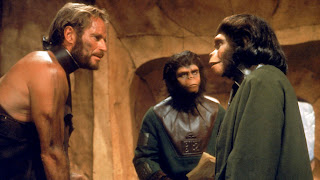 Planet of the Apes cleverly reverses the role of the white male, placing Taylor in a position at the bottom of the natural hierarchy. While the Apes have significant intelligence, it is interesting that they have no knowledge of flight (Cornelius deems it a 'scientific impossibility') and are bewildered by Taylor's capacity for intelligence as he throws the airplane as a demonstrative signifier of his crash. The plane is a simple task but Taylor successfully turns the written media into a diagram. Thematically, Planet of the Apes is a layered film and one that poses a threatening, thought-provoking tension in relation to the future of humanity and the planet. Our expectation of the treatment of the human in many other science fiction films is reversed, leaving the viewer forced to identify and relate to an ape, which is ultimately a problematic experience for many viewers.
Posted by Andy Buckle at 9:35 PM