This hugely enjoyable Zombie comedy/horror flick is all-round great entertainment. Directed with enthusiasm by Ruben Fleischer from a collaborated screenplay between Rhett Reese and Paul Wernick, Zombieland follows four survivors of a Zombie apocalypse, which has left the entirety of America a deserted wasteland, as they embark on a road-trip across the country in search of a Zombie-free sanctuary. Following the tradition of Edgar Wright's Shawn of the Dead, this horror spoof is full of witty cultural references, hilarious performances, plenty of action and uses Metallica's 'For Who The Bell Tolls' over the opening credits. 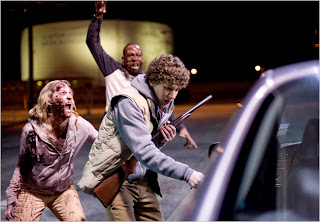 The virus spreads following a mutated strain of mad-cow disease, that has turned humans into aggressive flesh eating Zombies. The central character is 'Columbus' (Jesse Eisenberg, The Social Network), a timid college student trying to make his way back to Columbus, Ohio, so see if his parents are still alive. He has managed to remain alive by strictly adhering to a list of rules. These inventive survival procedures, including the requirement of strong cardio and the 'double tap' to ensure the Zombie is really dead, are revealed to the audience in quite an imaginative way before the opening credits, and are a common point of comic reference for Columbus throughout the film. Having survived an attack from his sexy dorm neighbor, 406, which is shown in flashback, Columbus eventually runs into 'Tallahassee' (Woody Harrelson, The Messenger). Tallahassee is a man who has made it his mission to kill as many zombies as he can, and is on a direct quest to find the last remaining edible Twinkies. They form an allegiance, and set out for Columbus' home town. When they stop for supplies at a grocery store, they meet 'Wichita' (Emma Stone, Easy A) and 'Little Rock' (Abigail Breslin, Little Miss Sunshine), a pair of con-artist sisters, who steal their weapons and their vehicle. Later, when Columbus and Tallahassee by chance locate a truck full of guns, they catch up to the girls (whose stolen vehicle has subsequently broken down) and propose they travel together. The group decides to head for Pacific Playland, an amusement park rumored to be Zombie-free. 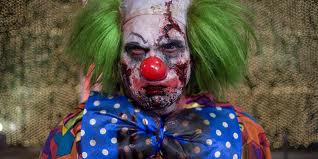 The film takes a series of crazy turns, as the group start to bond during their road trip, and even stop to visit Bill Murray's mansion when they pass through California. Murray's brief cameo is absolutely fantastic, as he disguises himself as a Zombie so he can walk amongst the infected and play golf on his favorite course without being threatened. The film culminates in several terrific video game-like sequences at the Pacific Playland amusement park as the group use the rides to their advantage and ward off a huge Zombie attack.
Though relatively short in length, the action is fast-paced, smart-mouthed and riddled with humorous cultural references. Jesse Eisenberg (in the geeky, awkward role that likely had him singled out for The Social Network) and Woody Harrelson are a great mismatched pair. Their comic timing is impeccable, and Eisenberg's voice-over narration is particularly witty. Emma Stone (who's very sexy here) and Abigail Breslin, are also quite likable in their performances, and well cast. 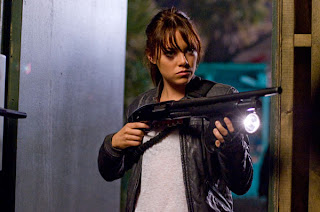 The film also looks great. The scenes of post-apocalyptic carnage are particularly impressive, as is the groups random destruction of a souvenir store. The special effects used in this film also contain several effective visual elements, notably the use of 3D rendered texts to display of the "Rules for Survival in Zombieland", which appear as they are announced by Columbus. Often they are involved in the action, animated to reflect the rule itself, and splattered with blood. I saw this film as designed, and especially in the final sequences, to replicate a video game. The filmmakers use an abundance of stunts, including slow-motion shootouts, fast back-tracking shots of the characters being pursued by the Zombies and once especially cool looking shot from within the roller coaster car with Tallahassee as he battles the Zombies. It also made me think of Max Brooks' novel, The Zombie Survival Guide, which is a survival manual dealing with the potentiality of a fictional Zombie attack. I don't know this figured into the script, but it's material that certainly should be considered within the genre. The make-up artists did a great job on the Zombie's, made to resemble the hyperactive, supremely mobile 'Infected' of 28 Days Later rather than the lumbering undead of George A. Romero's horror classics. 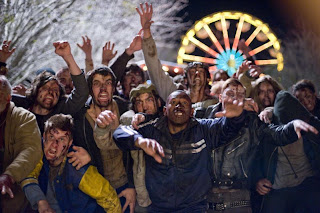 From the opening moments of Zombieland, all the way through the forgivable predictability of the conclusion, I enjoyed it. But this isn't to say it is perfect. It's lack of plot doesn't prove to be a distraction, but you can't help but notice that there is very little driving the narrative, beyond the desire for the filmmakers self-amusement. All we know is that there was has been an apocalypse and the characters need to make for the West coast because of a rumor (which we never hear personally) that there exists a Zombie-free zone. The film is made up of a series of really cool locations and ideas, from their relaxing escape amongst the empty rooms of Bill Murray's lavish mansion to the Zombie-film-set-in-an-amusement park idea, without anything concrete justifying why they all exist within the same film. Still, Fleischer's wonderfully energetic Zombie romp is great fun. Recommended for everyone, but those with weak stomachs may struggle through the copious amounts of gore.