The Big Lebowski, now one of cinemas most popular cult classics, and the Coen Brothers' funniest film, is a truly wild ride. Jeff Bridges, in one of his most definitive roles, plays Jeffrey Lebowski, a lazy, unemployed slacker living in Los Angeles. As we are revealed in the opening monologue from Sam Elliot (who narrates the film), he refers to himself, and is known around town as "The Dude." He shares a passion for bowling with his close friends, Walter (John Goodman) and Donnie (Steve Buscemi), wanders around in his bath robe, drinks White Russians at any hour of the day, pays for anything with a check, and loves that his rug really ties his room together. 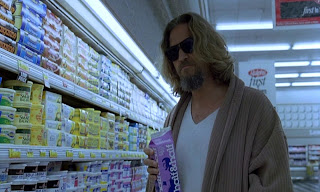 After returning home from bowling one night, The Dude is roughed up by two thugs, who claim that his wife owes money around town to a man named Jackie Treehorn. They flush his head down the toilet and urinate on his rug before realizing that he isn't the millionaire they are looking for, but in fact a complete loser. At the behest of his friend, Walter, he decides to track down the real Jeffrey Lebowski (David Huddleston), and seek compensation for his 'pissed-on' rug. Later events reveal that Lebowski's young trophy wife (Tara Reid) has been kidnapped by a group of Nihilists, with the ransom demand of one million dollars. The Dude is commissioned to courier the money to the kidnappers and ensure her safe return. Plans go awry when Walter accompanies The Dude and decides to keep the money, and it is subsequently lost when The Dude's car is stolen. The scheme becomes much more complicated than expected, 'new shit comes to light' and The Dude becomes embroiled in a bizarre noir-like mystery involving Nihilists, pornographers, feminist artists and private investigators, who are all played by a wealth of intriguing and idiosyncratic characters. 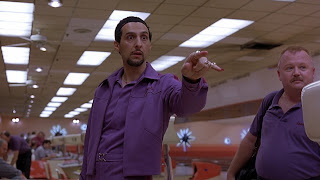 This is easily one of the wackiest and funniest films of all time. The entire cast is exceptional, with many Coens' regulars appearing in supporting roles. Included in the fun are Julianne Moore, Phillip Seymour-Hoffman, Peter Stormare, John Turturro and Jon Polito. But it is Jeff Bridges who will be forever remembered for his portrayal of The Dude. The dialogue is repeatedly quotable and full of self-referential cultural wit, the series of dream sequences are hilarious and the score a fusion of a brilliant original score from Carter Burwell, mixed with a series of classic pop tunes. This is unique craftsmanship from the Coens', who never fail to deliver. Along with Fargo and No Country for Old Men, this is near the top of my favorite films by the Coen Brothers.