The Way Back is the highly anticipated new film from renowned Australian director Peter Weir, a man known for the acclaimed films Master and Commander: The Far Side of the World, The Truman Show and Gallipoli. Many have come to expect greatness from Weir, and despite The Way Back once again proving that Weir is a gifted director capable of making a grand visual epic, it feels overlong and emotionally disengaging. From a screenplay written by Weir and Keith Clarke, inspired by The Long Walk by Slawomir Rawicz, this war drama tells the story of a group of prisoners who escape a Siberian Gulag camp during World War II, and embark on a journey that takes them across the Siberian border, through Mongolia, via the Gobi Desert and the Himalayas, and into non-Communist India. 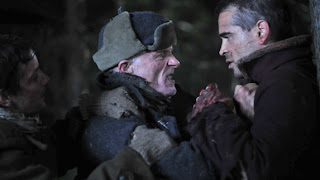 The events of the film are set in 1942, but opens with text explaining that in 1939, Poland had been invaded by Germany from the West and by Russia from the East, dividing rule over Poland. The first sequence is an interrogation of Janusz (Jim Sturgess), a Polish POW, by a Soviet officer. Janusz refuses to confess to the allegations that he is a spy, but the evidence supplied by his wife (who had been pressured to testify through Soviet torture) results in Janusz' sentence to the Gulag for 20 years. At the Siberian camp he meets the men he will eventually escape with. Included are Mr Smith (Ed Harris), Valka (Colin Farrell), a hardened Russian criminal, and Khabarov (Mark Strong), an actor with visionary methods of escape. Khabarov quickly befriends Janusz and confides in him his proposed escape plan, which targets the south Siberian border, passing Lake Baikal. Despite lacking Janusz' resolve, Mr Smith joins him in the escape, along with Valka and four other men. They escape during a severe snowstorm, barely managing to survive the first night, before Janusz navigates them through the harsh forests to the Siberian/Mongolian border. 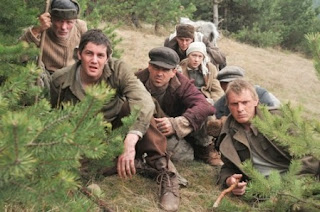 When they reach Lake Baikal, they meet up with a young girl named Irena (Saoirse Ronan), who tells them that she had escaped from a collective farm outside of Warsaw, and that the Russians had murdered her parents. This story is falsified by Mr Smith, but later revealed to mask an even sadder tale. She is warmly welcomed to the group, and matches the determination and stamina of the men. After Valka leaves the party at the Mongolian border, the six remaining continue to Ulaanbaatar, only to discover that Mongolia is also under Communist rule. Janusz decides they should pass through the Gobi Desert and scale the Himalayas to reach friendly territory in India. This seemingly impossible task is willingly agreed to by everyone and they set out. We know from the opening texts that only three of the men make it to India, so it is inevitable that they begin to fall one by one. Crossing the seemingly endless plains they become weakened with blisters and sunstroke, and in a grueling display of human survival, reach freedom. 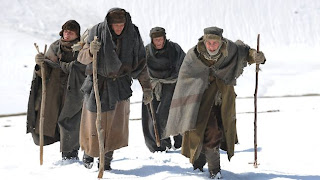 We never actually see the escape, and besides Janusz' talk and food rationing with Mark Strong's character, we see little of their preparation. Khabarov is really a pointless character, other than to plant the idea of escape in Janusz' head, and Mark Strong really added nothing special to a character that could have been written into an interesting cameo. He declines the invitation to accompany the escapees. In this tale, it is not the escape that is the most extraordinary feat, but their survival during the months that follow, and the huge stretch of treacherous terrain they cover. The film tries to address their desire to be free men and documents their strength, determination and togetherness to overcome such hardships. It is a powerful and inspiring adventure, but as the audience you tend to feel emotionally detached throughout. I actually felt very little for the characters by the end, and after the better half of two hours with them, I still felt like I didn't know them. The scope of their journey, and the way the journey is portrayed, as a seemingly endless struggle with nature, leaves very little time for the characters, who we find captured from a long distance to situate them in their struggle. Even the moments when we are revealed to them interacting, it is almost never beyond the immediate situation, and apart from finding out a way to identify them within the group, you will be hard pressed to even remember their names by the end. 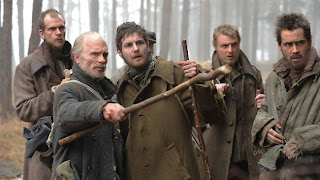 None of the performances are particularly memorable, but not bad either. Jim Sturgess was a solid and likable lead, who assumed leadership of the men, despite being one of the youngest. He is resourceful and encouraging, and attached to a desire for kindness. Ed Harris is always great as a grizzly veteran who just seems to tag along and offer his world-weary wisdom. Colin Farrell's brief role was disappointing though. Sporting a pretty ordinary Russian accent, he plays a tough guy hardened by the prison system. He only joins the posse to escape a debt with one of the prisoners and he separates from the group at the Mongolian border, forever viewing Russia as his homeland, and Stalin as a hero. The best performance, I would argue, was Saoirse Ronan. For much of the first half, the screen is dominated by the three distinguished male stars, with the other four barely given a minute. But during the latter half, they are given more involvement. Their performances, like those of Harris and Sturgess, are also quite impressive.

The entire film is beautifully shot, and the rugged natural terrain they cover, be it the icy forests of Siberia, the endless plains of the Goby Desert or the mountainous slopes of the Himalayas, is the most eye-catching feature of the film. The troupe has to overcome nearly every obstacle nature can throw at them, while scouring the harsh climate and needing to constantly re-supply food and water. After leaving the camp amidst a snowstorm, they are forced to overcome extreme heat exhaustion, sandstorms and mosquito attacks. But at each obstacle the film plows through it without any real drama, and we are thrust into another ten-minute sequence of their journey accompanied with unimportant dialogue and that triumphant score. There are parts where it becomes an ordeal to stay interested. I thought, once they reached the Mongolian border, that they were still doing rather well. It didn't really focus on their health struggles up until that point, more on different episodes of the journey, but once they find themselves trapped in the desert, their survival beyond actually seemed pretty incredible. There has been some debate over the reliability of the source material. Rawicz's account in The Long Walk has been debunked, and claims made that the account was actually about a man named Glinski, while the tale itself of a troupe of Siberian Gulag escapees that marched into India is also believed to be suspect. Nevertheless, Weir has declared that his film is based on the account of The Long Walk, which is very likely a fictional struggle. The film actually seems that way. In one sense you believe it to be based on true events, but during the film you begin to question the plausibility of their survival. It seems unfathomable. The way the film is shot, the terrain seems ready to swallow up the travelers at any moment. 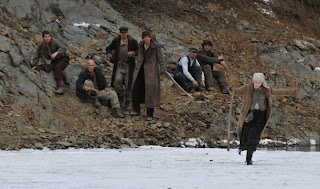 The Way Back received its sole Academy Award nomination for Makeup, and it has a chance too. The artists certainly did a fantastic job. Weir's direction of the epic adventure is best realized in Master and Commander, but the early sequences outlining the hardships of the Gulag, are captured in quite elaborate and epic fashion, utilizing aerial tracking shots over large sets and incorporating lots of extras. But following the escape, and once the action becomes a more personal struggle, it isn't as compelling as it should be, which is disappointing because the film is a grand technical achievement, with really stunning shooting locations throughout Bulgaria, Morocco and India. Look, I'm not going to try and dissuade you from seeing The Way Back, because it really is an epic story on a grand scale. It's great to look at, and it's a powerful account of human survival. It was just disappointing to leave the cinema, and really not feel anything. I should have been inspired and pumped by their struggle, but I wasn't. None of the characters are particularly memorable, and there was plenty of time to develop them. Not the quality of film you come to expect from Peter Weir, but certainly worth a watch.