A distinguished cast of likeable veteran British actors headlines Dustin Hoffman’s directorial debut, Quartet, a pleasant, life-affirming drama and a dainty observation on ageing and the importance of clinging to one’s passion in the twilight years. Ronald Harwood adapts the screenplay from his own play. 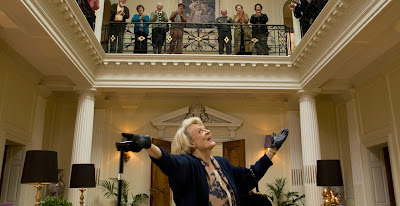 Reggie (Tom Courtenay), Wilfred (Billy Connolly) and Cissy (Pauline Collins) are three retired opera singers who live together, along with a community of gifted elderly artists, at Beecham Hall (Hedsor House, Buckinghamshire). Every year, to celebrate Guiseppe Verdi’s birthday and gather funding, the house puts on a gala concert, overseen by the eccentric director Cedric (Michael Gambon). But with the unexpected arrival of Jean Horton (Maggie Smith), Reggie’s ex-wife and the fourth member of their once-famous quartet, the three try and convince her to reunite with them on stage. But, with old rivalries and unresolved personal tensions emerging, Jean is hard to convince.


Continue Reading at Graffiti With Punctuation.
Posted by Andy Buckle at 2:54 PM