When a shooter fires six shots from a parking station into a crowded bayside park, killing five innocent civilians, a former army sniper, James Barr, is quickly picked up. All of the evidence (the van used, a fingerprint on a quarter, the custom bullets) suggests that he’s the wanted man. To the surprise of his prosecutors, Barr immediately requests to have Jack Reacher, a ghost who is only ever found if he wants to be, work for his defense. It doesn’t take Reacher long to figure out that Barr has been set up; setting out to uncover who’s really responsible. 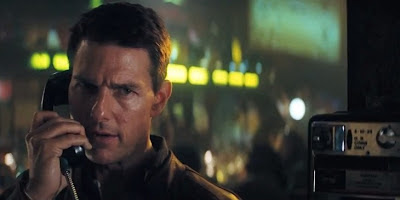 The casting of Cruise as Reacher, originally written by Lee Child to be an unstoppable force of nature (an imposing 6’5, 200 plus pound figure, I believe), has garnered controversy since the announcement. Cruise certainly doesn’t have this sort of size, so this disdain is understandable, but he makes up for that by oozing this focused and confident intensity. His compelling presence exceeds his stature. He is physically capable and convincingly pulls off the demeanour reminiscent of such a decorated career. What is terrific about Reacher is that his intelligence and his ability to unravel the case and coerce alternative theories without even a second look at the evidence is more essential than his physical prowess. His punches sure leave an impression, but Cruise is also given some killer lines, and his fast wit and cheeky delivery consistently provoked laughs.


Continue reading at Graffiti With Punctuation.
Posted by Andy Buckle at 11:01 AM