Hitting cinemas on the 13th December are some similarly themed films. Several light, breezy romantic comedies with a touch of drama that achieve varying degrees of success. Liberal Arts hit a spot with me. Love Is All You Need didn't. 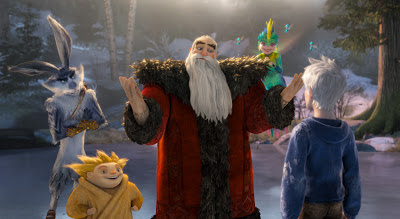 Rise of the Guardians - an epic adventure that tells the story of a group of heroes - each with extraordinary abilities. When an evil spirit known as Pitch lays down the gauntlet to take over the world, the immortal Guardians must join forces for the first time to protect the hopes, beliefs and imagination of children all over the world.

Liberal Arts - Newly single and uninspired by his job in college admissions, the introverted Jesse Fisher (Josh Radnor) lives with his head buried in a book. His deep nostalgia for his own alma mater in Ohio - the dining halls and dorm rooms, the parties and poetry seminars - makes him wonder if his best days are behind him. So when his favorite professor (Richard Jenkins) invites him back to campus to speak at his retirement dinner, Jesse jumps at the chance. Meeting Zibby (Elizabeth Olsen) - a precocious classical music-loving sophomore - awakens in Jesse long-dormant feelings of possibility and connection.

Love Is All You Need - Ida (Trine Dyrholm, In A Better World), a hairdresser living in Copenhagen, has just completed a treatment of chemotherapy for diagnosed breast cancer. In the days prior to her flight to Sorrento for the wedding of her daughter Astrid (Molly Blixt Egelind) to Patrick (Sebastian Jessen), Ida learns that her tactless husband Lief (Kim Bodnia) is having an affair with a young accountant from his office – and soon intends to leave Ida and remarry – which results in further humiliation. While at the airport she embarrassingly backs into a terse, uptight and self-centered businessman (Pierce Brosnan, The Ghost Writer), who is understandably less than impressed. Coincidentally, this is Patrick’s widowed father Phillip, also on his way to Italy. What follows is a kitchen-sink drama that tracks awkward revelations about both dysfunctional families, suffering from an array of personal conflicts and repressed emotions. But, amidst it all, both Ida and Phillip find an unexpected second chance at love.

Paris-Manhattan - The eternal wisdom of Woody Allen informs PARIS-MANHATTAN, debut writer/director Sophie Lellouche’s delicious and charming romantic comedy about a young woman whose choices in life and love are shaped by the philosophies of her favourite filmmaker.
Idealistic pharmacist Alice (the adorable Alice Taglioni) is totally obsessed with the works of Mr. Allen. She surrounds herself with images of him, continually quotes lines from his films and even prescribes her customers DVDs of his movies to help alleviate their ailments; it’s little wonder she’s still single in her thirties! Alice’s increasingly concerned Jewish parents hope to cure her fixation by setting her up with a handsome French gentleman (Patrick Bruel), but even he quickly realises that he’s no match for the man of her dreams.

I also want to mention the limited December 20 release of FROM UP ON POPPY HILL, the wonderful new animated film from Studio Ghibli. Screening exclusively at Dendy Newtown (I think) here in Sydney, where it appeared as part of the Real Anime Festival earlier in the year, it is one you can't miss.


From Up On Poppy Hill is beautiful story with a charming teenage romance at the core, and much like some of the most poignant of Ghibli's features, offers up inoffensive small-scale drama and genuine stakes without the presence of an obvious villain. It relies on generating context and attentive world building, and after introducing us to characters we grow to care about, it becomes an immersive cinematic experience that successfully leaves a viewer in a state of pure joy. It is touching, funny, emotionally rich and thematically engaging. There were a handful of moments - whether they are conversations, surprising plot developments, or simply a reaction from a character - that brought swelling emotions of both sadness and joy.

Weekly Recommendation: Between now and Boxing Day, the BIG day, there isn't a lot happening. Having said that, we can't be sure at this point whether the Boxing Day films are going to deliver either. But, I can recommend 'From Up On Poppy Hill' and 'Liberal Arts'. I have heard mixed things about 'Rise of the Guardians', but it could be family fun.
Posted by Andy Buckle at 11:20 AM